By Ryan McGeeney
U of A System Division of Agriculture
July 22, 2019

LITTLE ROCK – While most of Arkansas may have escaped the worst of what Hurricane Barry augured in potential wind and rain, crops in many areas are struggling to move past the primary and secondary effects of the latest twist in an already difficult year. 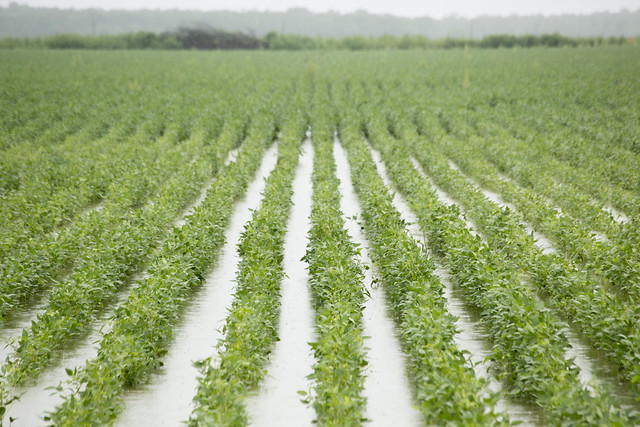 Chad Norton, soybean and wheat verification coordinator for the University of Arkansas System Division of Agriculture at the Southeast Research and Extension Center in Monticello, said several fields that he oversees received at least 9 inches of rain between July 15-16, when remnants of Barry pushed through portions of the state.

Many soybean plots throughout the southern portion of Arkansas were already five to six weeks behind the normal crop schedule, due to late planting in the spring. The deluge, he said, will simply delay or further stunt soybean progress even further.

“Any soil-applied herbicides I had out there are just washed out — they’re gone,” Norton said. “I’m worried about pigweeds — the soil’s so wet, I don’t think I can get back in there and control them. That’s what’s on my mind right now.

“There were several fields going underwater, especially in Jefferson, Arkansas and other counties, where the heavy rain fell. What lives through that is going to be stunted and hurt for a little while longer,” he said.

The delayed planting and torrential rains are also compounded by the fact that much of the soybean seed growers began with this year was also of lower quality, as the 2018 harvest was also impacted by heavy rainfall that began in September.

“We had such a terrible fall last year that the seed quality we were working with this year was also terrible,” Norton said. “I know of several fields that had to be replanted three or four times — not from weather, just from poor seed quality. One field, for example, planted 340,000 seeds, and they got 65,000-75,000 plants come up.

Norton said that at this point in the year, he found it unlikely that growers could get their money’s worth out of another round of replanting soybeans, given the natural reductions in yield inherent in such late planting.

“Driving around the past couple of weeks, I’ve seen beans that are just now coming out of the ground,” he said. “So people did do some July planting, but I don’t think you could ever get your money back if you planted today. We’ve lost too much relative yield, day-to-day, by this date.”

Isolated rice fields in the state also bore some of Barry’s brunt throughout the week. Jarrod Hardke, extension rice agronomist for the Division of Agriculture, said some rice fields between Pine Bluff and Stuttgart received 6-8 inches of rain, with reports of blown levees in narrow bands in the southern half of the state.

“But most of the eastern Delta region got 3-4 inches of rain,” Hardke said. “Certainly enough to pop a levee here and there. But a lot of that water was spread out over several days, which certainly helped with managing it, because it didn’t all come in a single deluge, like we were anticipating.

“Some of the heavier rain submerged some of the more mature rice in the state,” he said. “We were hoping we could get that water off those fields rapidly — older rice does not withstand being flooded for very long. We need to get that water off within seven days, if at all possible. Usually, if it stays under for 10 days, it’s done. When the water comes off, it’s going to fall down and rot at that point. Those are still isolated incidents, but they are out there.”

Hardke said that despite the many setbacks that have already faced Arkansas rice growers in 2019, the overall crop looks good at this point — and that there may, in fact, be silver linings ahead.

“There’s a precedent — even when we’re in delayed planting — if we get to follow that with a mild summer and avoid extreme, excessive heat during the reproductive growth stages, we can still make some very good yields,” Hardke said. “And this is across commodities.

“It certainly hasn’t been made yet, on any of those fronts, but we have to try to remain a little optimistic that we still have some very good yields left in us,” he said.

While forecasts from the National Weather Service put much of Arkansas under a heat advisory Friday and Saturday, temperatures are predicted to drop into the 80s next week, during what is often the first of the two hottest weeks of the year for the state.

“That might be a shock to the system,” Hardke said. “The biggest problem with it is just a general slow-down of the crop progression. It won’t hurt anything, but it will cost us a little bit of time, in terms of getting this crop to the finish line, and getting it out of there.

“I guess that’ll be the next oddity that 2019 will throw at us: a strange, late cool-down in July,” he said. “And then we’ll have to wait and see what’s next.”