By Mary Hightower
U of A System Division of Agriculture
July 17, 2019

LITTLE ROCK – With rainfall totals of more than a foot in some places on Tuesday, the slow-moving remnants of Hurricane Barry washed out roads, shuttered businesses and had ranchers checking to be sure their cattle hadn’t drowned. 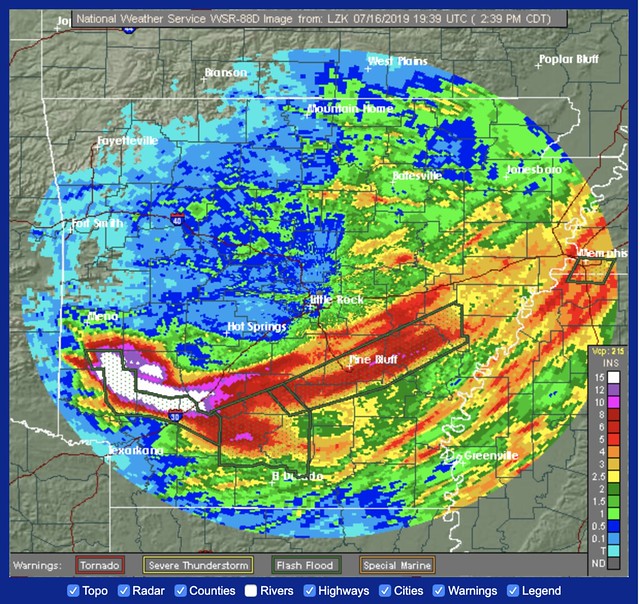 The National Weather Service at Little Rock reported four feet of water on U.S. 67 in Arkadelphia. At Hopper in Montgomery County, three people had to be rescued after driving into water. For the duration of Barry’s presence, co-op observers in Pike County reported 12.73 inches at Langley, 11.69 inches near Antoine and 13.5 inches at about 1 mile north-northwest of Murfreesboro.

“None of my staff can get to the office,” Terrell Davis, Pike County extension staff chair for the University of Arkansas System Division of Agriculture, said from his home. “In Pike County Highway 27 south of Kirby is closed. Highway 301 south of Delight is washed out. County roads  at Muddy Fork, Nathan, and Billstown are washed out.”

“The city of Dierks is closed down; so is most of Nashville,” she said. “It’s crazy. I’ve never seen anything like this.”

Ince said one of her staff members and her husband raise poultry and “their chicken houses are flooding and they can’t keep the generators going. It’s bad.”

Various media outlets showed video of parts of Nashville standing in several feet of water.  There were reports that some 200 head of cattle have been reported missing in Howard County because of the flash flooding.

Flooding closed a stretch of I-30 near Hope and parts of U.S. 371 between Prescott  and Blevins were closed.

Clark County Extension Agent Cindy Ham said Tuesday afternoon that the water was beginning to recede from her property. Her office was among those closed, thanks to a water main break, which prompted a boil order and closure of the county courthouse.

At home Tuesday morning, the view wasn’t much better.

“Our whole pasture was under water this morning,” she said. “Some sections were over 4 foot deep.”

By mid-afternoon, she checking on their crossbred herd. Navigating the property was difficult because of washed out culverts and pockets of water. By Wednesday, she knew all her cattle were safe.

“It’s just now letting up to where we can get out and get chores done,” Ham said. “I’m hoping to see some sunshine and blue skies. It’s been nasty weather for the last three days, including the monsoon that hit last night.

“You don’t see many Julys like this one,” she said.