LITTLE ROCK – The slow-rolling bête noir that was Barry was best summed up in a tweet by Stephen Hoskyn, who farms near Stuttgart: “Tropical Storm Barry is like that friend that comes over, drinks too much, and then won’t leave hours after all the sensible folks left.”

Barry started slinging bands of rain into Arkansas on Saturday and continued to inundate the state on Tuesday, dropping more than 8 inches of rain in parts of southwest Arkansas, closing and washing out some roads and spurring flash flood warnings. 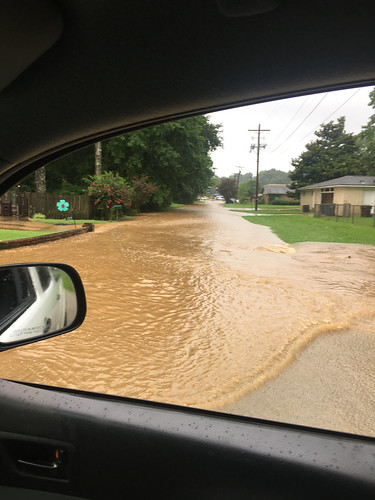 HELENA-WEST-HELENA - Street flooding in Helena-West Helena, a legacy of tropical system Barry. Taken July 16, 2019. (U of A System Division of Agriculture photo by Robert Goodson)

However, Barry brought more than water and wind. The tropical system might have also hastened the flight of crop-hungry insects from the south.

“We know that Louisiana is loading up with red banded stink bugs and we’re finding a few in extreme southern Arkansas,” said Chad Norton, extension soybean and wheat verification coordinator for the University of Arkansas System Division of Agriculture. “How many more were ‘blown’ into the state by Barry?  We fought these in 2017 and had a very difficult time in controlling them.”

Norton said soybean loopers may also have hitched a northbound ride on Barry.

“That would have them showing up way earlier than normal. I can see insecticide costs for this crop getting out of hand quickly,” he said. “Our crop is late compared to normal, we now have had a weather system that could have made the insect populations worse and we’re already having large corn earworm moth flights.”

“This much rain is just washing our soil-applied herbicides out of the fields,” Norton said. “These residual type herbicides are the back bone of our weed control strategies for pigweed. I’m afraid that we’re now going to get a big flush of pigweeds and we won’t be able to get back in the fields in a timely manner to control them due to the wet soil conditions.”

Barry’s blotting out of the sun could mean trouble for cotton.

“We are worried about cloudy weather at a time a plant needs sunshine to produce energy needed to keep boll load,” said Bill Robertson, extension cotton agronomist for the Division of Agriculture. “This will likely lead to massive shedding of fruit. Cooler weather will help soften the impact. We have a late crop so lost fruit will be hard to make back up.”

Barry’s not all bad - yet
The water wasn’t all bad. Robert Goodson, Phillips County extension agent for the Division of Agriculture, said “In most places, the rainfall was needed. This free water saved a lot of producers a lot of money.”

However, as the rain continued into Tuesday, Goodson said, “Area drains are beginning to fill up and with the hard rain we are getting now, some low-lying areas might have water standing in them. So far there has been no damage with the storm, but that could change if this hard rain continues for an extended period of time.”

Jason Kelley, extension wheat and feed grains agronomist for the Division of Agriculture, said the rain was helpful for some corn growers.

“It is always nice to get a 2-inch rain and cooler temperatures on corn in mid-July,” he said. “This allows producers to shut down irrigation wells during the critical grain filling stage where the plant is still using a considerable amount of water.

“This rain may help the earliest planted corn make it to maturity without any further irrigation in south Arkansas,” Kelley said. “However, 3- to 6-inches-plus of rain is not helpful, especially if water stands on fields more than a few hours. Winds with storms are also an issue as lodging potential goes up, especially if soil is saturated.”

Matthew Davis, Jackson County extension agent for the Division of Agriculture, said “The slow pace of the rainfall has kept everything from becoming too overwhelmed. Most guys had prepared for this rain by cleaning ditches, opening gates and ditching.”

In his county, low-lying areas would be an issue. “It’s really too late to replant anything and there are still many acres of soybeans not planted. We assume at this point no further planting will happen.”