By Mary Hightower
U of A System Division of Agriculture
July 15, 2019

FAYETTEVILLE, Ark. – The 50th anniversary of the Apollo 11 moon landing is a reminder of the scores of technological advances that came out of America’s space program, including cordless appliances and retractable stadium roofs. 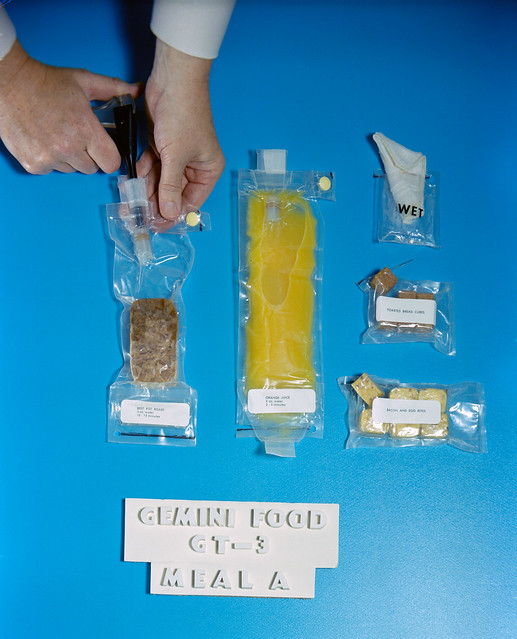 However, there’s one innovation consumers experience nearly every time they eat: a process called HACCP, or Hazard Analysis Critical Control Point. The inspiration for HACCP was simple: a need to ensure astronauts had the safest food possible. Halfway between the earth and moon is no time to have to deal with a food-borne illness.

“Food safety and space travel both contain some level of risk and we endeavor to control that risk to the best of our ability; but it is never zero,” said John Marcy, extension food processing specialist for the University of Arkansas System Division of Agriculture. “Those very first people who went to the moon certainly faced much more uncertainty than the crew of Apollo 13 and their troubles certainly caused later flights to be safer.”

Paul LaChance was hired as flight food and nutrition coordinator at the Manned Spacecraft Center in Houston during the space program’s early days.

“We have to realize that this was the first time in the history of the … United States, that zero pathogens in foods was required,” he said in an oral history interview recorded in 2006. Incorporating the critical control point method “was a breakthrough, in the sense that actual pathogens were being measured and not tolerated.”

In the quest for safe space food for the Gemini astronauts, the program used what was then a tried-and-true method; putting stringent limits on the presence of disease-causing agents in all food slated to go into space. However, so much of the food was destroyed through testing for pathogens, there wasn’t much left to go into space. Previously, food processors didn’t test for pathogens unless there was a case of food-borne illness.

In the Apollo program, all contractors were required to develop models for their products to systematically pinpoint areas of failure and eliminate them. The food contractors were not exempt. Enter Pillsbury and Howard Bauman, one of the company’s research directors and a microbiologist. In looking over the critical points as his company went down the path of space-food manufacturing, Bauman said, “we found critical control points like telephones in the room. They are a good source of bacterial, unless you sterilize the receiver. That’s something you really don’t always think of.” Bauman’s quote comes from the “Societal Impact of Spaceflight,” a publication of the NASA history office.

Applying this logic to food systems was a new idea. The system worked and found its way into the rest of the food supply through Pillsbury, which applied it to its own foods. Other food companies, including fast food chains, saw the system as a way to ensure safe food for their customers.

“We understand our food manufacturing processes and as long as we maintain those in control, we have a safe food supply; that is the comfort afforded us by HACCP management systems,” Marcy said.

For more information about food safety, visit the Division of Agriculture’s Center for Food Safety at https://center-for-food-safety.uark.edu/, part of the Arkansas Agricultural Experiment Station.