LITTLE ROCK – Arkansas’ rice crop, delayed by a wet spring and bludgeoned by high heat, is now facing a triple threat from Tropical Storm Barry, whose remnants are expected to drop heavy rain on the eastern side of the state on Sunday. 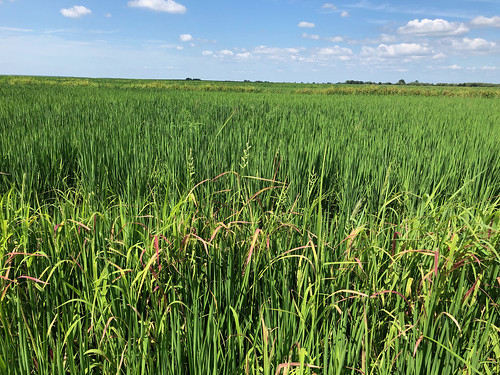 RICE — Sunny skies over rice at the Dabbs family farm in Stuttgart, Arkansas, on July 11, 2019. Tropical system Barry was expected to bring rain and wind to the state July 14 and 15. (U of A System Division of Agriculture photo by Ryan McGeeney).

A forecast map issued by the National Hurricane Center on Thursday showed potential rainfall totals ranging from 4 to 10 inches in eastern Arkansas, with the higher amounts expected closer to the Mississippi River. (see: https://www.nhc.noaa.gov/refresh/graphics_at2+shtml/145531.shtml?rainqpf#contents)

“Barry has the potential to dump inches of rain during flowering and heading – rain which will disrupt pollination,” said Jarrod Hardke, extension rice agronomist for the University of Arkansas System Division of Agriculture. 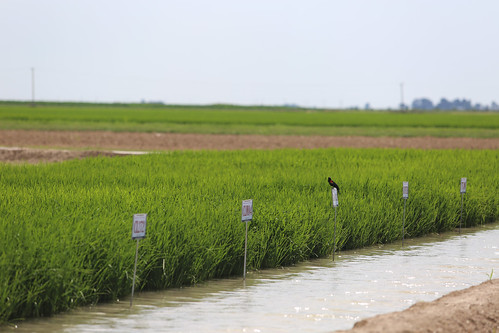 HARD YEAR -- Barry could make a hard year even harder for rice growers if it brings heavy rain and winds. (U of A System Division of Agriculture photo by Mary Hightower) .

“We’re very vulnerable at this point, particularly as the plants begin flowering,” Hardke said. “A little wind is good — we like to have pollen on the move, because it means improved chances for pollination and grain fill. But if we get excessive winds and heavy rains during this period, particularly during the middle of the day, it’s bad news.

“It’s not that common in July, but you can end up blanking out entire panicles from severe wind and rain,” he said.

The rain presents an additional worry.

“All that moisture will further aid disease development such as sheath blight and blast,” Hardke said.

The third worry is whatever strength Barry still might be packing when he sweeps into Arkansas:  “If accompanied by strong winds, the tropical storm can also cause early lodging.”

Lodging is a condition in which the plant’s stalks start to lean or are flattened, which makes the grain difficult to harvest.

“The weather is very much an unknown,” Hardke said. “One of the problems with the sporadic thunderstorms this time of year is that they pop up in the middle of the day, when plants are actively attempting to flower. If a storm hits around 4 p.m., it’s not that big of a deal — most of the flowering for that day is complete. But noon is the worst possible time for a storm to hit rice in this stage.

Aside from storms, growers will also be keeping an eye on nighttime temperatures.

“Once we pass flowering, and get into the grain fill stage, the concern is the night time temperatures getting too high,” Hardke said. “It can lead to chalky rice kernels, rather than translucent. It’s just not as desirable an appearance, although it doesn’t necessarily change how the rice cooks or eats. In extreme cases, it can lead to yield losses.

“This is always a concern this time of year, he said. “But with everything else that’s happened to us this year, I think everyone would agree that we’re all kind of hoping for a pass at some point this season. We’ve gotten hit with about everything possible in one season so far — we’re due to miss one.”