FAYETTEVILLE, Ark. — International agricultural trade is a benefit to the world, but it comes with hidden dangers in the form of tiny hitchhikers that can unleash havoc on a nation’s farms. 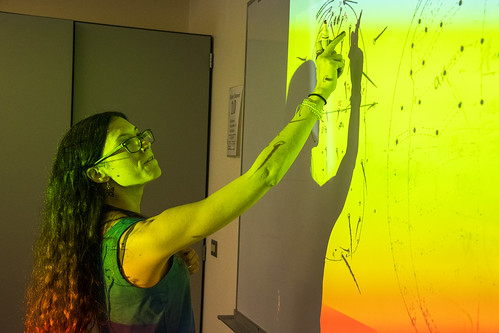 STRUCTURES -- Alexandra Revynthi of the University of Florida identifies structures of a mite. (U of A System Division of Agriculture photo by Fred Miller)

They are found everywhere in the world in an unimaginable diversity of species, many of them harmless and even beneficial in their native habitats, said Ashley Dowling, associate professor of entomology and mite expert for the University of Arkansas System Division of Agriculture and U of A’s Dale Bumpers College of Agricultural, Food and Life Sciences. But many mites feed on plants, including food crops and ornamentals, and can cause serious damage to crops, especially when they invade a new land with no natural predators.

The first line of defense against invasive species, including mites, are agricultural inspectors who search agricultural products entering the U.S. and other countries. It’s important that they know what they’re looking for, Dowling said.

For 68 years, entomologists from American and international institutions have held an annual Acarology Summer Program to train professional agricultural inspectors, researchers, arthropod diagnosticians, and students in the biology and identification of mites. The stand-alone training program, supported primarily by registration fees, was hosted by The Ohio State University for the last 57 years.

Beginning this year, the program was hosted by the Division of Agriculture’s Arkansas Agricultural Experiment Station. Dowling has assumed directorship of the program.

Inspectors from the USDA Animal and Plant Health Inspection Service and its counterparts in other countries spent up to three weeks, June 10-28, immersed in the world of acarology, the study of mites.

This year’s program included a one-week introduction to acarology course followed by a two-week agricultural acarology course. In alternating years, the Acarology Summer Program offers training in mites important to veterinarians and soils.

Participants get a broad knowledge about different families and genera of mites. In the intro course, participants even learn the painstakingly precise skill of dissecting mites.

“Even if you can’t identify a specific species,” Dowling said, “you will know how to find out. Participants will get the background to be able to recognize characteristics of genera and families and to know if what they find is dangerous to their country’s agricultural industries.”

This year, the intro class had seven participants and the two-week agricultural class had 20 participants. Dowling said the countries represented include the U.S., Brazil, Netherlands, Canada, Russia, Chile, Spain and Belgium.

Mites are important to any country that has plants or stored grains, Dowling said.

Spider mites, for example, feed on more than 600 plants, including most important food crops and ornamentals, Dowling said. Some mites also function as vectors to spread diseases that can cause serious harm and are costly to control.

“Mites, because they are small and vigorous, can reproduce rapidly and do severe damage to commercial crops and plants,” Dowling said. He added that they also can threaten animal agriculture.

Not all mites are dangerous, Dowling said. Many are considered beneficial to agriculture and the environment because they feed on harmful mites and insects.

“Some mites are commercially bred and marketed as bio-control against pests, especially in greenhouse production systems,” Dowling said.