CLARKSVILLE, Ark. — Caddo, a blackberry packing a little name and a mouthful of flavor, is a high-quality thornless variety from the University of Arkansas System Division of Agriculture’s fruit breeding program. 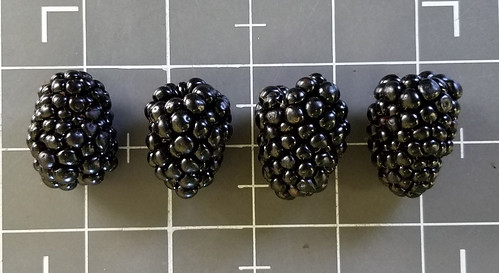 “Caddo is really exciting because it adds to our collection of high-flavor blackberries,” said John Clark, Distinguished Professor of horticulture and fruit breeding for the Arkansas Agricultural Experiment Station, the research arm of the Division of Agriculture. “It has very good fruit flavor and large berries.”

Clark said, “Caddo has very noteworthy and desirable aromatics that enhance its flavor.”

“In recent years, we’ve increased focus on improving the flavor of thornless blackberries in the program,” Clark said. “Caddo is the latest development to come out of this effort.”

Caddo is an early-ripening cultivar, Clark said. Its average first harvest date is June 8 in west central Arkansas, beginning harvest about two days later than Natchez and two days earlier than Osage — two prior blackberry varieties released by the Division of Agriculture.

Caddo shares a breeding parent with Osage, a blackberry released by the division in 2012, Clark said. That male parent was Ark. 2108, which contributed many of Caddo’s superior quality traits. It was crossed with a highly flavored female parent, APF-45, which was released in 2009 as Prime-Ark®45, a primocane-fruiting variety.

Caddo produces oblong fruit with even drupelet fill, Clark said. The berries are larger than Osage and Ouachita, the latter a division variety released in 2003 and the most popular of the Arkansas varieties.

The berries have good firmness that is consistent from year to year in both dry and rainy harvest seasons. Clark said the fruit demonstrated excellent storage and market potential.

“Flavor was consistently retained after seven days of storage,” Clark said, “and in most samples, the aromatic components and berry gloss held for seven days.”

Caddo also had good success in retaining its flavors and appearance up to 14 days past harvest.

“Caddo, with its excellent flavor, plant hardiness and storage potential should be a commercial cultivar with good potential for shipping,” Clark said. “It’s also an excellent option for local market production and home gardens.”

To learn more about the division’s fruit breeding and available cultivars, visit the Commercial Fruits and Nuts webpage:  https://www.uaex.uada.edu/farm-ranch/crops-commercial-horticulture/horticulture/commercial-fruit-production/