By Ryan McGeeney
U of A System Division of Agriculture
@Ryan_McG44

LITTLE ROCK – The first industrywide assessment survey of Arkansas beef producers in more than a decade finds producers are most concerned with who will follow in their footsteps, how their current operations may be able to expand and the cost of equipment, land and a high quality herd bull. 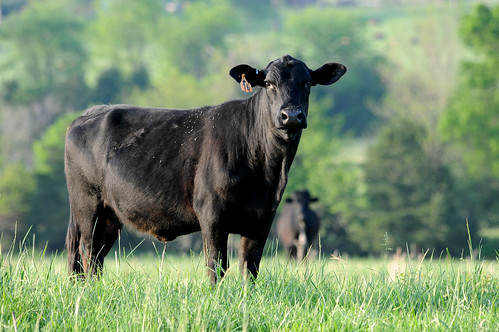 LEGACY -- Industrywide survey reveals Arkansas beef producers concerned about the future of their farms and their industry. (UA System Division of Agriculture photo by Fred Miller)

The 2018 Arkansas Beef Industry Assessment, developed and administered by the University of Arkansas System Division of Agriculture and the Arkansas Beef Council, included responses from more than 330 cattle producers in six industry sectors.

Shane Gadberry, professor of ruminant nutrition for the Division of Agriculture, said the survey was initially developed at a November 2017 summit, where industry leaders and university facilitators identified strengths, limitations, opportunities and threats to beef production in the state. The survey was also based in part on a similar assessment administered in 2005.

The six industry sectors represented at both the summit and in the survey responses included producers involved in both small and large commercial cow-calf operations, purebred and stocker cattle operations, allied support industries and educators.

Gadberry said many of the participants voiced concern over the long-term sustainability of the Arkansas beef industry. The average age of Arkansas cattlemen continues to rise, as fewer young people pursue careers in ranching. More than 60 percent of respondents to the assessment survey reported being 50 years old or older; more than 47 percent reported being older than 60, according to the survey. In 2005, only about 35 percent of survey respondents reported being older than 60.

“Pretty much every industry segment we surveyed, someone was looking at that next generation of producer,” Gadberry said. “Who’s going to continue supporting the beef industry in the future. Some are concerned about young people returning to the farm — some identify it as a threat to the industry. Others identify it as an opportunity to do a better job of marketing the ranching lifestyle to others, and help grow the industry that way.”

“The question of ‘legacy’ gets further complicated when you start looking at the availability and price of land,” Gadberry said. “Even if we have a generation of people who’d like to get into ranching, how are they going to be able to afford it? The land and the cattle?”

Cattle producers in Arkansas — both actual and potential — are often faced with land prices as high as $2,000 an acre. Supporting a single cow requires three to four acres of grazing or haying pasture. Furthermore, it can be difficult to expand existing ranch acreage contiguously.

“The chance to purchase a 120 acre tract of land can be difficult,” Gadberry said. “Today, it’s not uncommon for a producer who’s really expanding his cow herd to be operating in multiple counties. They’re not just buying adjacent properties to what they already own.”

Among the industry’s strengths in Arkansas, producers identified support from the Cooperative Extension Service, high water quality and the availability of quality genetics.

“There’s a lot of discussion about improving the quality of the cattle in the state, improving genetics, etc.,” he said. “There’s actually less emphasis on that in the 2018 assessment, however, compared to 2005. Today, the emphasis is on the idea of marketing.

“Our producers see opportunity in growing demand including international markets,” he said. “They also recognized opportunities such as improving marketability locally through value-added practices, such as preconditioning.”

Gadberry noted that in the broader beef industry, there tends to be a stigma against beef produced in the South and southeastern states, which Arkansas producers have long worked to overcome.

“We know the calves that leave Arkansas for feedlots outside the state aren’t valued as high as those coming from other areas,” he said. “We’ve made a lot of progress in beef carcass quality characteristics. The assessment indicates there’s opportunity to address herd health management and reduce risk of calves getting sick after leaving the farm.”

The 2018 Arkansas Beef Industry Assessment will be available this spring.