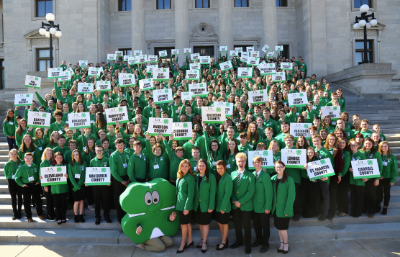 LITTLE ROCK — A sea of green borne by some 700 youth flooded the seat of Arkansas government at Tuesday’s 4-H Day at the Capitol event at which Gov. Asa Hutchinson and other state officials praised the members for their leadership now and potential for the future.

View From the Capitol

Hutchinson and other state officials addressed the mass of 4-H’ers in the Capitol rotunda.

“What a great group of young leaders,” Gov. Hutchinson said during the opening tribute to 4-H. “We are going to have a bright future. To see all of you in the Capitol today is very exciting to me and encourages all of us about the future of this state. Thank you for what you do to support Arkansas agriculture and leadership.”

He told the group that “one of you might be governor someday."

Hutchinson noted that the one thing left out of his introduction was that he was a 4-H alumnus from Benton County — which brought a huge cheer and applause from the crowd. He cited research about how 4-H membership was more likely to lead to better life and health choices as well as 4-H members being more likely to contribute to their communities.

The governor talked about some of the work going on at the Capitol on Tuesday including, “a new highway bill, and a transportation bill that will better fund our highways and repair some of those farm to market roads,” he said.

“You are the voice of agriculture in our state,” Griffin said. “You know agriculture and how important it is to our state.”

“Here's the deal,” Griffin continued, “not every elected official knows what you know. It's really important that y'all come down here to get to know the elected officials.”

“Let everyone in this Capitol know what you stand for,” Griffin said.

Griffin led the crowd of more than 700 kids in a cheer that he wanted heard in both chambers. He counted to three, and everyone yelled, “4-H!”

Arkansas Attorney General Leslie Rutledge said, “The Capitol is green with envy today with all the leaders in this room. I see a whole lot of leadership in this room and it makes me happy.”

Like Gov. Hutchinson, other state officials noted that they or their children grew up in 4-H clubs.

State Sen. Bruce Maloch of Magnolia said, “4-H is for everyone. It’s personal for me. I was a 4-H member. My three children were 4-H members and now I have granddaughters that are 4-H members. I have experienced that learn-by-doing process. It instilled in me life-changing skills.”

“Whatever you do in the future,” Maloch said, “your 4-H experiences will serve you well.”

Arkansas Land Commissioner Tommy Land said, “Both my kids grew up in 4-H. When you grow up on a farm, you do everything from diesel mechanic to large animal vet. 4-H reinforces the things we teach our kids. Things dealing with character. We have a great need for men and women with great character.”

Land praised 4-H volunteers, “I recognize the time that you spend and the finances that you spend. I want you to know we appreciate that.”

“This is a great day,” said Mark Cochran, vice president-agriculture for the University of Arkansas System.“We're so proud of our 4-H kids and volunteers here at the Capitol with us. It’s always amazing to encounter people from our elected officials and regular citizens who have gone through our 4-H program and testify as to what a positive impact it's had on their lives.”

Cochran noted that more than 700 4-H members from 74 of the state's 75 counties registered for 4-H Day at the Capitol. Total participation, including 4-H leaders and volunteers, numbered about 850.

“We're delighted and grateful that Gov. Asa Hutchinson took time out of his busy schedule to make comments and share that he was a 4-H’er,” Cochran said.

Following the opening ceremony, the Arkansas youth made presentations and showed displays in the rotunda about their 4-H projects. Later, they toured the Capitol, its grounds and monuments. Thomas-Scott said the tours helped orient the kids to the history and functions of Arkansas government. In the afternoon, the 4-H’ers attended legislative sessions in the Arkansas House and Senate.

Sara Gardner, Washington County 4-H’er and Arkansas 4-H president, said Arkansas 4-H’ers are blessed with the support of many state legislators who serve as advocates for the organization.

“We are very grateful in Arkansas to have men and women with the state Capitol who are former 4-H’ers and understand the importance of this organization,” Gardner said. “Today is a day to appreciate them and build relationships with them, because 4-H’ers of today are truly the state leaders of tomorrow.”

“Arkansas 4-H Day at the Capitol is an opportunity for 4-Hers to become increasingly civic-minded and appreciative of those who are a voice for us and enable us to have incredible opportunities,” Gardner said.

White County 4-H’er Isabella Davis was surprised to learn that Gov. Hutchinson was a former 4-H member. “I thought that was really cool that he really understands what we’re about,” she said.

Dalton Roberts, Craighead County 4-H’er, referred to watching the state legislature in action from the Senate and House chamber galleries. “Just to see our senators and legislators up here at the Capitol, getting the job done and passing legislation for agriculture all across the state,” he said.

Gardner summed up the 4-H Day at the Capitol experience, “Making the best better is what we, as 4-H’ers, strive to do each day, and we are thankful for those in our State Capitol who share this aspiration.”