LITTLE ROCK – Since the end of the Great Recession in 2010, both Arkansas’ and the national economy have grown; however, the state’s rural areas have “grown only slightly since 2010 and have not even come back to pre-recession levels,” according to Wayne Miller, an author of the “2019 Rural Profile of Arkansas.” 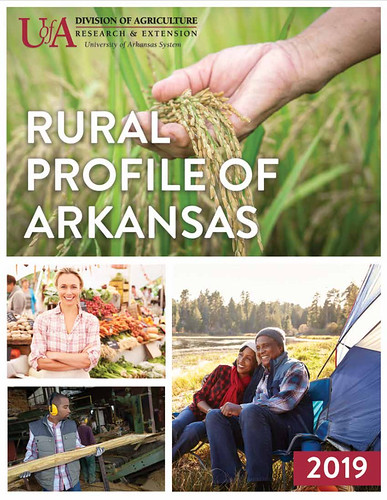 PAINT A PICTURE -- The 2019 Rural Profile of Arkansas booklet is now available from the University of Arkansas System Division of Agriculture.

The Rural Profile of Arkansas has been published every two years by the University of Arkansas System Division of Agriculture since 1993. The 2019 Rural Profile was compiled by Miller, professor and extension community and economic development specialist for the Division of Agriculture and extension program associate Tyler Knapp. Download the profile here: http://bit.ly/ArkRuralProfile19.

“The Rural Profile of Arkansas highlights our role in analyzing and finding solutions in economic and community development for our state,” said Mark Cochran, vice president-agriculture, for the University of Arkansas System Division of Agriculture. “This work is at the very core of our mission to strengthen agriculture, communities, and families by connecting trusted research to workable, practical answers.”

Arkansas economy grew 5.8 percent from 2010-2016, a rate about half the nation’s growth rate of 11.9 percent. Employment in Arkansas’ rural regions  grew less than 1 percent during this period and was 3.2 percent less in 2016 than it was in 2007. It’s a decline that has many outward ripples.

The continuing “outmigration from rural areas of the state to urban areas  … is the result of rural economies declining or stagnant,” he said. “Many businesses in rural areas are closing or downsizing.”

That in turn, means a shrinking tax base for local governments and makes it difficult to generate enough revenue to maintain services and infrastructure.

He said one bright spot is pre-K education for children ages 3-5.

“The rural areas have about the same percentage of children in the age group enrolled as urban areas,” Miller said.

Other trends noted in the Rural Profile of Arkansas:

“That’s the point to have this publication though, is to show that the what’s needed are investments in our primary resource, which is the people of the state,” Miller said. “Investments are needed in education, healthcare, and also investments in infrastructure, to compete in the world economy.”

“A lot has changed in the world economy and how we do business since the first Rural Profile in 1993,” he said. “It’s a much smaller world. It’s a much more connected world and I think the difficulty is we haven’t helped the rural communities keep up with the changes that have occurred within the global economy. It makes it harder for them to compete and leaves them more vulnerable to changes like the Great Recession.”

Miller said Community and Economic Development programs such as Breakthrough Solutions and Stronger Economies Together, presented by the Cooperative Extension Service, and CREATEBridges, a multi-state effort funded in part by private partners, are at work to help rural communities grow and improve the lot of their residents.

These programs help communities better use local resources and they bring with them needed knowledge about the international economy to enable rural Arkansas to generate jobs and income,” he said. “They’re bringing in new ideas on how to compete.”

For example, “we are trying to encourage rural areas to make products instead of commodities. You have a unique product, it’s value-added and can be sold to niche markets,” Miller said. “That way, you can be the price-setter instead of a price taker. This includes all enterprises from farmers and manufacturers to tourism and professional services.”