STUTTGART, Ark. — Extension entomologists are developing a new percentage-based threshold for insect defoliation of rice that can help eliminate unnecessary applications of pesticides. 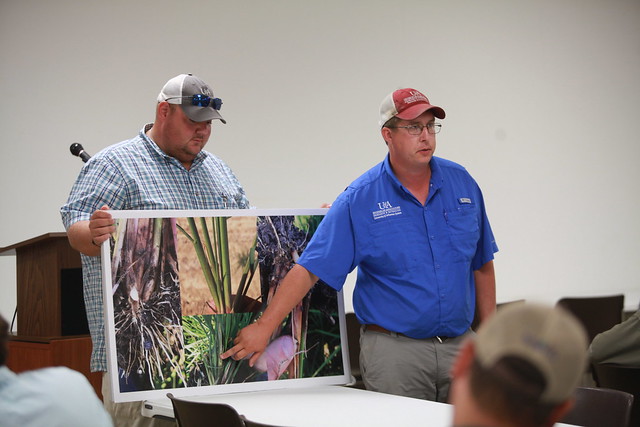 Severe defoliation in rice from a large flight of fall armyworms in 2016 led researchers with the University of Arkansas System Division of Agriculture to develop a new defoliation threshold, said Nick Bateman, assistant professor and crop entomologist.

It is common to see fall armyworms, a defoliating caterpillar pest, in pastures and fields, Bateman said.

Defoliation is the removal of leaves caused by insects feeding on them. it can cause both yield loss and heading delays, Bateman said.

The defoliation threshold that triggered pesticide application in 2016 was adopted from wheat in the mid-1990s and was based on the number of larvae per square foot.

After seeing the defoliation of rice that year, Bateman said, “We knew we needed to go to work.”

Researchers manually defoliated test plots of rice plants to determine at what level of defoliation and during which stage of plant growth significant yield reduction results, Bateman said.

The research determines the economic threshold — the point where a consultant or grower decides they are going to make an application of a pesticide to halt defoliation before significant yield loss occurs, Bateman said.

“What that is going to do is save that grower from the point where he is going to be impacted economically,” Bateman said. “We are also hoping to show how much defoliation rice plants can tolerate.”

If a producer is going to make an application for fall armyworms, researchers recommend spraying a lambda-cyhalothrin. But pesticide applications come at the risk of removing beneficial insects, Bateman said.

“When rice can be taken back 100 percent down to the soil or water line at those early growth stages — two to three-leaf — with no impact on yield, there is no reason for us to make those early applications,” Bateman said.

“From a yield loss standpoint what we see is, unless we are getting over 50 percent defoliation at the late tiller stage, we are not seeing yield loss,” Bateman said.

If the defoliation is over that threshold there can be an almost two-week delay in heading.

This delay can push producers out of their optimal heading window and lead to some quality issues as well as drag out the harvest, Bateman said.

“The delay in heading is almost more concerning than the yield loss,” Bateman said.

The new threshold recommendations have been established for conventional rice varieties, Bateman said. They are also investigating how thresholds may need to be adjusted for hybrid rice.

They are currently working on fact sheets and will be presenting the new thresholds at grower meetings this winter, Bateman said.