YEAREND: Despite late planting for some, cotton outlook bright at end of 2019
skip to main content
News - 2019

YEAREND: Despite late planting for some, cotton outlook bright at end of 2019

By Mary Hightower
U of A System Division of Agriculture
Dec. 16, 2019

LITTLE ROCK – Arkansas cotton growers may remember 2019 as one of their better years, despite a downward revision of expected yields, said Bill Robertson, extension cotton agronomist for the University of Arkansas System Division of Agriculture. 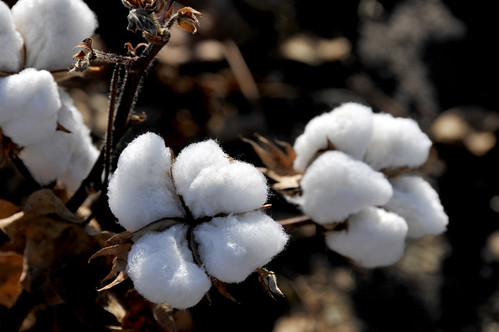 In October, the National Agricultural Statistics Service forecast Arkansas’ average yield at 1157 pounds per acre, but in November revised that downward to 1,102, a figure that stuck into the December 2019 Farm Report.

“Going into November we’d been at our second-best average,” Robertson said, adding that the revision may related to gins running a little behind. Nov. 1 is the target date to harvest cotton, but many growers were still running pickers in mid-November and some were still picking in the second week of December in far northeast Arkansas.

“We still have some gins that aren’t through ginning yet,” he said Dec. 12. “So, there’s not a really good tally yet. Statewide, I think if we don’t set a new record, we’re going to be pretty close.

“If I was to summarize the 2019 season in one word, it would be ‘drainage’,” he said. “When we look at fields that did well, and farmers who did well, it was because those fields had better drainage.”

In 2019, “we really had two different planting seasons,” Robertson said. “We got started in the field in April to the first of May, then it turned wet. Rolling into the Memorial Day weekend, only half our crop was planted.

Those that were planted early, “I’ve had some farmers tell me it was their ‘show-the-banker’ cotton. The plants came up good, looked pretty and rooted well. They were on better-drained fields,” he said.

For those fields that weren’t planted early, when the rain came, “it was too wet to get into the field,” he said. “Fields with cover crops were the first to be planted. They had better internal drainage.”

Drainage was a factor even within a single field. “Ends of fields or parts of fields that didn’t have good draining didn’t grow very well,” Robertson said. “One farmer said he had a 500-pound difference from one end of the field to another. It all had to do with drainage.”

For those who got planted late, “the saving grace was the heat unit accumulation in September. We had more than we did in August. The heat units we got in late fall were really beneficial.”

Robertson said he was told by some Craighead County farmers that they’d grown some of the best cotton they’d ever seen.

“When I visited with cotton merchants, they told me, ‘Bill this crop is so good, it’s better than last year’,” he said. “Our quality is really good.”

Robertson said some of the cotton was so dry and fluffy that big, round modules that typically weigh more than 5,000 pounds didn’t even get to 5,000 pounds.

Robertson said he was upbeat about some of the new varieties that will be commercially available next year. We had a couple of Deltapine varieties that proved popular this year. One variety, DP 164B2XF, represented 35 percent of the state’s cotton acres, a second, DP 1518B2XF, had about 25 percent.

Robertson said he saw some Stoneville, NexGen and Phytogen varieties that came out of the county trials this year that were “really, really good. We have a pretty good selection of new varieties that are going to be really good yielding. I’m excited about the varieties we have to choose from next year.”

Learn more about the variety trials here: https://aaes.uark.edu/variety-testing/. Find insights from Robertson and others, here: http://arkansascrops.com/

To learn more about cotton production, call your county extension office or visit www.uaex.uada.edu. Follow the Cooperative Extension Service on Twitter at @UAEX_edu.