New blackberry from Division of Agriculture achieves pinnacle of flavor

CLARKSVILLE, Ark. — Ponca, a new blackberry variety from the University of Arkansas System Division of Agriculture, offers the pinnacle of flavor from one of the world’s leading public blackberry breeding programs. 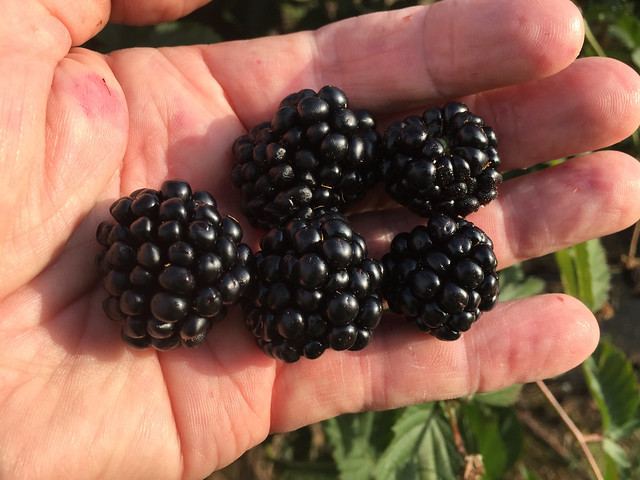 HOW SWEET IT IS — Ponca, the 20th blackberry from the Division of Agriculture fruit breeding program, represents the pinnacle of achievement in flavor development. (Photo courtesy of Dr. John R. Clark)

Ponca is the 20th blackberry from the fruit breeding program of the division’s Arkansas Agricultural Experiment Station, said John R. Clark, fruit breeder and Distinguished Professor of horticulture for the Division of Agriculture and the University of Arkansas’ Dale Bumpers College of Agricultural, Food and Life Sciences.

“This is about as exciting as anything I’ve ever had my hands on,” Clark said. “When I noticed how good Ponca tasted, I thought that if Ponca was someone’s first blackberry, it would change their entire perception of what a blackberry is.

“It’s our highest achievement for a sweet, enjoyable berry,” he said.

When the fruit breeding program was established by Dr. James N. Moore in 1964, Clark said, work on blackberries was aimed at taming a wild fruit. Moore wanted blackberries without thorns, and he began that effort by selecting and breeding for large berry size, plant growth traits, consistent berry production, disease resistance and other desirable agronomic traits.

By the time Moore retired and Clark took over the breeding program, Arkansas blackberries had developed from a wild berry that grew in tangled vines on the ground to cultivated crop plant with erect canes, increasingly reliable fruit production with large berries and improved resistance to common Arkansas plant diseases.

Moore’s and Clark’s collaboration also led to the first erect-caned thornless blackberry plants and the first steps toward something new — primocane-fruiting blackberries that flowered and fruited on first-year canes, extending the fruiting season to as late as frost.

With a solid foundation of domesticated and productive blackberry varieties and breeding lines established, Clark turned his attention toward improving flavor.

Native blackberries tended to be tart because of high acidity, Clark said, and the early varieties from the breeding program also tended to be tart. It was the flavor most Arkansans were accustomed to and Moore preferred the tart flavor.

But Clark wanted a sweeter berry and began breeding for reduced acidity, to reduce tartness, and increased sugars to improve sweetness. He also began to seek flavor traits that are a little more ephemeral — aromatics.

“Sweetness or tartness is the first thing you notice when you bite into a blackberry,” Clark said. “But, as you chew, other fruity flavors begin to emerge. Those are the aromatic qualities.”

Aromatics are a quality of fruit chemistry, Clark said, and they are harder to pin down because they are a product not only of genetics, but also of environment. He has found that Arkansas blackberries grown in other states and other countries often have flavor qualities he doesn’t find at home.

And considering that Division of Agriculture blackberries are grown on every continent but Antarctica, Clark said, that’s a broad range of flavor potentials.

Osage and Caddo blackberries were the first varieties to reflect that greater emphasis on sweetness, Clark said, and Ponca has raised the flavor bar to a new level.

Clark’s opinion of Ponca’s superb flavor is born out by both anecdotal and scientific evidence.

Berry growers, breeders and enthusiasts from across the United States and around the world regularly trek to the Division of Agriculture’s Fruit Research Station north of Clarksville to see what Clark is up to. He relishes leading visitors through the rows of blackberry plants standing on the lush, rolling hills of the station, orating on the heredities, traits and characters of established blackberry varieties and advanced breeding lines.

And tasting. Visitors pluck the plump berries and get a mouthful of the results coming out of the Arkansas breeding program, and learn the names if they have them, or the number designations that identify advanced breeding lines that may be headed toward commercial release.

“I’ve had more people remember A-2538T (Ponca’s breeding line designation) than any other to come out of the program,” Clark said. “They remember that flavor.”

Renee Threlfall, division research scientist in the department of food science, conducted a consumer sensory analysis of Ponca, Caddo, Natchez, Osage, Ouachita and Prime-Ark® Traveler, all blackberries from the Division of Agriculture breeding program. The berries were evaluated by a panel of 81 consumers for shape, size, overall appearance and taste.

Ponca is floricane-fruiting, producing flowers and fruit on second-year canes, Clark said. It is thornless with erect canes. Berries average 6.8 grams, slightly larger than Osage and nearly the same as Ouachita. The berries’ firmness is rated higher than Caddo and Osage and maintains firmness in rainy conditions.

First harvest, Clark said, is in early June at the Fruit Research Station, same as Natchez, two to four days before Caddo and Osage and seven days before Ouachita.

Clark said Ponca can produce a secondary bud crop that begins ripening 14 to 20 days after the first harvest of the primary crop, providing some recovery if cold injury occurs during spring freezes.

Postharvest storage potential has been comparable to Caddo, Ouachita and Osage, Clark said. Red drupelet reversion is low, similar to Osage and less than Natchez. Leakage from the berries was noted to be higher than other cultivars in some years, particularly when the berries are stored more than seven days. But its excellent sweet flavor is retained in storage, he said.

“Ponca plants have exhibited very good health with consistently healthy floricane leaves,” Clark said. “This contributes to its sweet flavor. It has shown to be disease-free, showing no orange rust or anthracnose and very limited cane or leaf rust in all our research trials.”

Clark said winter hardiness has been comparable to Ouachita and has shown very little injury to a low of 1 degree Fahrenheit.

Ponca has an interesting growth habit that offers plant management advantages, Clark said. The primocanes of most blackberry varieties tend to grow taller than the floricanes, he said, and require “tipping” prior to or during harvest. The primocanes require tipping to control growth and create the hedgerow of canes.

Ponca is available to licensed propagators now, Clark said. Non-exclusive licenses are available in the United States. For information, contact Cheryl Nimmo at 479-575-3953, or by email at cnimmo@uark.edu.