CLARKSVILLE, Ark. — Locally brewed craft beers can be even more local when made with Arkansas grown hops.

That was the consensus of 67 craft beer brewers, hops growers and budding hops growers who attended a hops workshop presented by the University of Arkansas System Division of Agriculture at the Fruit Research Station Aug.15. Research and extension faculty reported on the first year of a hops research project to determine the feasibility of hops production in Arkansas. 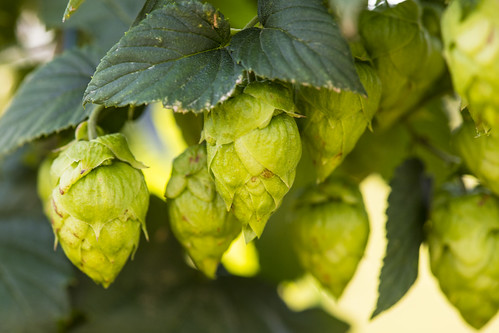 “Most hops production in the U.S. is in northern states,” McWhirt said, “but there’s a lot of interest in southern states.”

Driving the interest, McWhirt said, was explosive growth in craft beer breweries across the country. Craft beer production has nearly doubled since 2014.

Given the growing interest, McWhirt said, the division launched a research program supported by a grant from the Arkansas Department of Agriculture.

Hops are vigorous, climbing, herbaceous plants with twisted stems referred to as bines, McWhirt said. They grow 20-30 feet tall and remain productive for 10-25 years, depending on variety. Most hops have separate male and female plants, though sometimes a plant can produce both male and female flowers on the same plants.

The unpollinated female flower produces a cone, the part of the plant used to make beer. If pollinated, the cones will have seeds inside, which reduces the quality of the cones.

“You don’t want male plants in your hops yard,” McWhirt said. “That way, the cones don’t have seed in them.”

For those considering installing a hops yard, McWhirt recommends asking two questions: “Where am I going to sell the hops, and how am I going to get it harvested?”

Because of their climbing habit and long length, McWhirt said a tall trellis system is needed. The hops yard at the Fruit Research Station was planted in September 2018 on a modified grape trellis, extended to 12 feet in height.

Cone production depends on temperature and day length, McWhirt said. The plants grow vegetatively until June, and flowers begin to set after the summer solstice, when days begin to shorten.

For beginners, McWhirt recommended starting small, with a half acre or even a quarter acre at first. “Learn the system before investing in a larger scale operation,” she said.

Jackie Lee, resident director of the Fruit Research Station, said Arkansas hops producers need to be prepared to manage insects, diseases and weeds. She said mites presented the most trouble in the hops trial. “I think spider mites will be our biggest problem for hops,” she said.

To control broadleaf weeds, Lee said the hops team used a pre-emergent herbicide and then came back four to six weeks later for a second application.

“Eventually, you want to sell these hops or use them to brew beer,” said Renee Threlfall, division food scientist.

Threlfall discussed early work on post-harvest processing of hops. Her research on the hops team focuses on quality of hops after harvest.

After variety selection, growing location and cultivation, Threlfall said, harvesting, drying, processing and storage have significant impacts on the flavor and aromatics of hops.

Harvesting at peak ripeness is key to high quality, Threlfall said. “Use touch, smell and sight to determine when to harvest,” she said.

Threlfall discussed options for drying, from food dehydrators for small-scale operations, to drying racks, to coolers or even shipping containers converted with dehumidifiers.

The goal of drying, Threlfall said, is to reduce the moisture content of the hops from 80 percent to around 8-10 percent. This helps prevent molding and degradation of hops quality, she said.

For storage, Threlfall recommends heavy plastic storage bags, of at least freezer bag weight. She uses a vacuum sealer to remove air before freezing the hops for storage and shipping. It’s also important to label each bag with the crop variety, weight and harvest date of its contents.

The hops team is also working on cost analyses to help those considering growing hops weigh their options to achieve a sustainable and profitable hops crop.

He said craft beer brewers also want hops that can develop unique flavors. “There’s a lot of emphasis on aroma and fruity flavors,” he said. “We want hops that have that explosive flavor and aroma.”

Medina was encouraged by the interest in growing hops in Arkansas. “We would like to have a source of these in Arkansas,” he said.