FAYETTEVILLE, Ark. — When the University of Arkansas Razorbacks take the field against Portland State in Donald W. Reynolds Razorback Stadium Aug. 31, they’ll be hitting the gridiron on new grass. 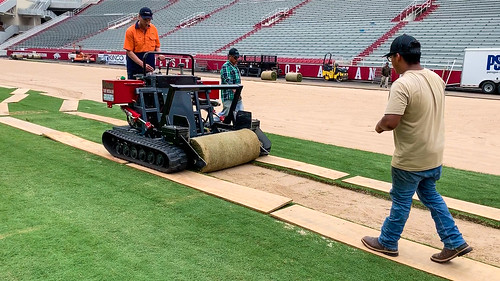 RAZORBACK GRASS -- The University of Arkansas Athletics Department chose a new bermudagrass variety to restore live grass to Razorback Stadium based on a recommendation from Division of Agriculture turfgrass researchers. (Photo courtesy of Tyler Carr)

The athletics department chose a new Bermudagrass variety from Oklahoma that was tested in variety trials conducted by University of Arkansas System Division of Agriculture turfgrass scientists.

The synthetic turf installed in 2014 was replaced this year a new variety of sports turf — real, live grass — within weeks of the Razorbacks’ first game in the stadium. In early 2018, as the synthetic covering neared the end of its lifespan, head football coach Chad Morris expressed his desire to go back to real grass.

In response, Pat Berger, director of sports turf operations, said he put together a brief on the pros and cons of going back to real grass.

“Synthetic surfaces are harder on the players,” Berger said. “Research has shown that playing football on live grass results in fewer injuries to hips and legs. And synthetic surfaces get hotter. Live grass gives off less heat.

“For overall playability, live grass is better,” he said.

When Doug Karcher, professor and turfgrass researcher for the Arkansas Agricultural Experiment Station, heard Athletics was considering replacing the synthetic playing surface with real grass, he called Berger. “I said, ‘as soon as you pull the trigger on that, let me know, because there’s a Bermudagrass you should look at,’” Karcher said.

Karcher and colleague Mike Richardson, professor and turfgrass researcher, and some of their graduate assistants from Dale Bumpers College of Agricultural, Food and Life Sciences, conduct ongoing variety testing research for turfgrasses at the Division of Agriculture’s Arkansas Agricultural Research and Extension Center in Fayetteville. In 2013, they began participating in a nationwide Bermudagrass trial, evaluating about 30 mostly experimental varieties from breeding programs all over the country.

The variety Karcher had in mind for the Razorbacks was OKC1131, a sports turf entry from Oklahoma State University. It was released for commercial use in early 2017 as Tahoma 31.

“Tahoma is a Native American word that means ‘frozen water,’” Karcher said. “It’s a reference to the variety’s cold tolerance.”

From their research, Karcher knew it was well adapted to growing in Arkansas. Northwest Arkansas has both sizzling heat in the summer and freezing cold in winter, and Tahoma 31 tolerates both well, Karcher said.

Also, he said, the University of Tennessee, Knoxville, had tested it under football traffic, and it proved hardy enough to endure the punishment.

“Their data and ours pointed to Tahoma 31 being a good choice for us,” Karcher said.

When the decision came to use real grass in Razorback Stadium, Berger took Karcher’s recommendation seriously. He spoke with the turfgrass researchers at Tennessee, who told him about its durability under football cleats.

Berger was sold. He selected Tahoma 31 for the football field’s new grass.

Really new. As in, no one else has it.

“There are only two places where Tahoma 31 sod is available,” Karcher said, “and it’s not on any other football fields, yet.”

Choosing the turfgrass was the easy part. Getting it on the field was a big operation, and the clock was ticking. The timeframe for installation was tight because the football team needed the field for spring games. That meant changing the surface couldn’t be done immediately after last season ended.

First, the synthetic surface — Berger calls it the “carpet” — had to be taken up, and the base layers under it removed. The good news was that the lowest base under the field — gravel and a layer of sand — remained from when Razorback Stadium last had live grass. That meant preparation for the new sports turf only required about 10 inches of sand to be placed on top of that original base.

Easier said than done. The sand was contracted from Arkola Sand at Alma. Unfortunately, the Arkansas River — source of the sand — was flooding when they needed it.

“Contractors took up the carpet and its base, and then we were stuck for about three weeks because there was no sand,” Berger said.

But the river went down, eventually, and the sand finally came. Berger said they added a new irrigation system and used a special grid called a matrix grass system to stabilize the sand while the grass grew roots to hold it in place.

The new grass came from Winstead Farms at Arlington, Tennessee, because of the two nurseries that had Tahoma 31, Winstead Farms was the one that was growing the grass on sand. Karcher said about 2 inches of sand came with the sod, so it matched the sand base used in the stadium.

The sod came in huge rolls on refrigerated trucks and was laid in early August. Since then, Berger said, the sod has been putting down roots and is getting established, though he’d like to see it move a little faster.

“I have two and a half weeks to make it work,” Berger said on Aug. 14. “I have a big calendar over my desk and I look at it all the time.”

Berger said the lines will be painted on the field about Aug. 19.