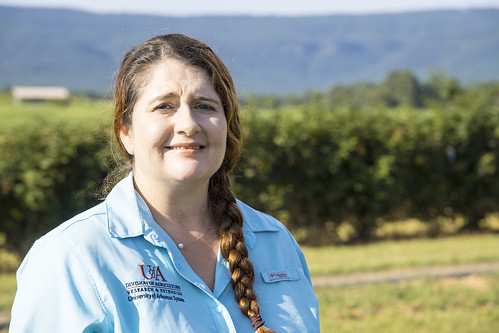 Lee has already been on the job since July, co-directing the station with Dan Chapman, who has served as resident director since 1997 and plans to retire the end of August.

“We are very pleased to have Dr. Jackie Lee take over as resident director at the Fruit Research Station north of Clarksville,” said Mark Cochran, University of Arkansas System vice president for agriculture. “Dr. Lee established a great reputation for her many contributions as an associate professor of horticulture and IPM extension specialist. She brings a wealth of expertise, experience and energy to her new role. She will provide excellent and important leadership to managing this internationally-renowned research station.

“Dr. Lee will also be the first female director of one of our research stations,” Cochran said.

“Jackie is uniquely qualified to take the reign of the Fruit Research Station,” said Jean-François Muellenet, associate vice president-agriculture and director of the Agricultural Experiment Station. “She has ambitious goals for the station and I look forward to working with her to implement her vision.”

A native of Mt. George, Ark., located near Dardenelle in Yell County, Lee earned a bachelor’s degree in biology from Arkansas Tech University, and a master’s degree and Ph.D., both in entomology, from the University of Arkansas.

After completing her doctorate, Lee worked as a research scientist for Dow AgroSciences, working her way up to senior biologist in research and development. After five years, Lee became an extension entomologist and pesticide coordinator for Oklahoma State University, leaving there in 2016 to join the University of Arkansas System Division of Agriculture.

“I spent eight years outside the state and just kind of circled around and came back to where I started,” Lee said.

Having one foot in research and the other in extension has given Lee a unique vision for steering the Fruit Research Station’s future.

“The station’s priority will continue to be supporting fruit researchers, especially the breeding programs,” Lee said.

The Clarksville station has a world-renowned blackberry breeding program — Arkansas blackberries are grown on every continent but Antarctica. It also has nationally and internationally known breeding programs in grapes, peaches and nectarines and blueberries, and a relatively new and growing program for muscadines.

“My vision is to grow the station, adding acres to accommodate new and expanding research programs,” Lee said. “I also want to get more researchers involved, adding or expanding programs in integrated pest management, greenhouse systems and more.”

The station has long hosted fruit production workshops, and Lee wants to expand those educational opportunities, holding regular pruning workshops and other programs.

“I want to make sure the people of Arkansas know where we are and what we offer,” Lee said.