What does Arkansas corn harvest hold in store?
skip to main content
News - 2019

What does Arkansas corn harvest hold in store?

By David Bennett
U of A System Division of Agriculture
Aug. 30, 2019

MARIANNA, Ark. –The Arkansas corn harvest is going to be a drawn out affair this year. 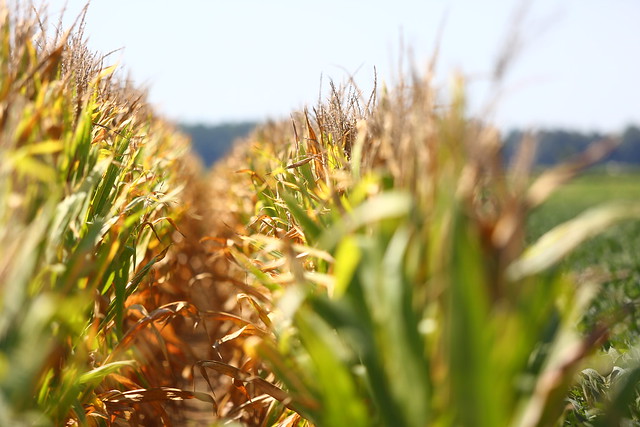 “Think back to the planting season when corn was planted from March through June,” said Jason Kelley, extension wheat and feed grains agronomist for the University of Arkansas System Division of Agriculture. “In a normal year, we’re done planting by the end of April. So, this year’s planting window was twice as wide and unfortunately harvest will likely be much longer than normal.”

In mid-August, growers with grain dryers began harvesting even though “moisture was a bit high. Growers without grain dryers have had to wait for moisture to come down are just beginning harvest,” he said. “To help dry the crop down and facilitate harvest, we need 90 degree temperatures and dry weather for an extended time, but the forecast says temperatures will drop and (the last week of August) we have good chances of rain, which will again delay harvest. Nothing has come easy this season.”

With only approximately 5 to 10 percent of the crop harvested, yield reports have been variable.

“We have some fields that are reporting exceptional yields as high as 250 bushels per acre,” said Kelley. “Unfortunately, others are reporting much lower yields. Fields with poor stands and/or poor drainage will likely have disappointing yields. Our seven-year state average yield is near 180 bushels per acre. With all of our late-planted corn, reaching that average level may be a challenge this year.”

How is the dryland crop with all the rain through the growing season?

“With the rains, you’ll likely be happy with a dryland crop. In Arkansas, over the last decade, dryland acres usually comprise between five and 10 percent of the total crop. Obviously, in dry years, the dryland acres don’t make much of a crop. This year, with timely rains there is some dryland corn that will have surprisingly high yields.”

At the same time, Kelley said, some of the better irrigated ground had delayed planting due to wet conditions and ultimately will lower yields compared to a normal year.

“If you have late-planted corn, a lot of things must go right to achieve maximum yields. Planting date studies we have conducted show, roughly, that yields begin to decline in fields planted after May 1.

“This year, we planted approximately a third of our crop after May 1. Foliar disease is also typically a bigger problem in late-planted corn – although southern rust has been lower than normal despite above average rainfall.”

Kelley noted this summer hasn’t been extremely hot and that may help with the late-planted crop as hot temperatures during June and July usually lower corn yields.

“The May and June corn may not be ready to harvest until October. Late-season rains and windstorms are always a concern for lodging. Anytime harvest is dragged out there’s more potential for something to go wrong.”

One good thing this year: because of the ample rains, irrigation costs are much less than usual. “Many farmers irrigated two or three times compared to a normal year when they may irrigate around six times.”

Kelley was at the Lonn Mann Cotton Research Station in Marianna on Aug. 22, harvesting grain sorghum.

“We don’t have a lot of grain sorghum acres – maybe 5,000 acres in the state. That’s a precipitous drop, because three or four years ago, the state was close to 450,000 acres,” he said.  “The price for grain sorghum and fears of things like the sugarcane aphids are a big factor in that. A lot of the grain sorghum was planted dryland this year and where it’s been taken care of it looks very good with the ample summer rainfall.”