LITTLE ROCK – There have been 23 reports of animals testing positive for rabies, according to a year-to-date map released by the Arkansas Department of Health. 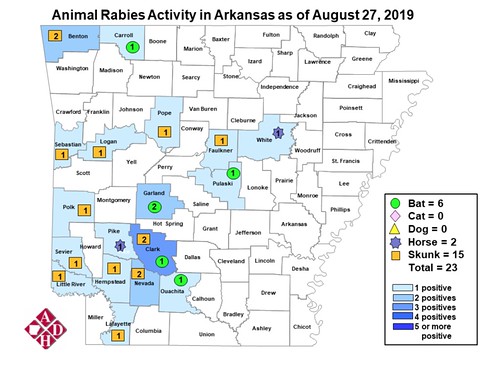 “Skunks and bats are the main reservoirs for rabies in our state,” said Heidi Ward, extension veterinarian for the University of Arkansas System Division of Agriculture.

“We have had two horses positive for rabies this year,” she said, which is very unusual. “Last year, we had a positive cow.”

One of the horses was in White County, the other in Pike.

On the plus side, “so far, this has been a good year with low numbers,” she said. “Not long ago, we had over 100 cases by this time of year.”

“The weather has a huge impact” on the numbers of reported rabid animals, Ward said. “Wild animals are seen around populated areas more frequently during times of extreme heat and/or drought, presumably to seek out water sources.”

Rabies can be transmitted from animals to humans through a bite and the saliva of an infected animal getting into the wound. It can also be transmitted if the virus-bearing saliva gets into mucous membranes of the eyes, nose and mouth. The virus works its way through the body’s nerves toward the brain. It is fatal when left untreated.

“This is a disease that can be prevented in people and domestic animals by a vaccine,” Ward said. “If someone sustains a bite from a bat or a skunk, be sure to clean the wound and see your doctor immediately. People should stay away from bats and skunks at all times, but especially if the animals appear sick or disoriented.”

Rabies kills more than 60,000 people worldwide every year, mostly in Asia and Africa.

For more information about this disease, see the fact sheet “Rabies” at https://www.uaex.uada.edu/publications/pdf/FSA-8018.pdf.