By Ryan McGeeney
U of A System Division of Agriculture
Aug. 23, 2019

FAYETTEVILLE, Ark. – The International Association of Food Protection recognized Steven C. Ricke, professor of food science for the University of Arkansas System Division of Agriculture, with the 2019 Fellow Award on July 21. 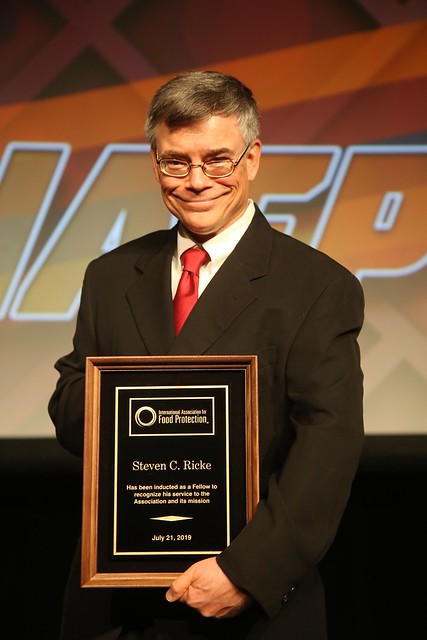 Ricke is the Donald “Buddy” Wray Endowed Chair in Food Safety and Director of the Division of Agriculture’s Center for Food Safety. He is also a faculty member of the food science department and Cellular and Molecular Graduate program at the University of Arkansas.

Ricke’s research program is primarily focused on Salmonella,with projects spanning more than 25 years, emphasizing studies on growth, survival and pathogenesis of the pathogen during food animal production and processing.

Ricke credited his fellow — and future — researchers for propelling him throughout his accomplished career.

“I am deeply honored by this recognition from an organization that I have been a long standing member of since I first became a faculty member over 25 years ago,” Ricke said. “I owe all of my accomplishments to the highly talented and motivated students and postdocs who joined my program over the years. None of this is possible without them and I consider their success in my program and in their subsequent careers the accomplishment I am most proud of.

“I am also grateful to the many industry and academic members of the Arkansas Association for Food Protection, a branch of IAFP which I have been associated with the past decade since its inception,” he said. “Their hard work and dedication to making the AAFP annual meeting a rousing success every year is deeply appreciated.”

Ricke has been active in IAFP since 1993, publishing 26 research and review articles in IAFP scientific journals and delivering 28 research presentations at national IAFP meetings. He has presented three invited talks at IAFP symposia, and served on the editorial board of the Journal of Food Protection. He served as co-founder and former president of the Arkansas Association of Food Protection, and was named an AAFP Fellow in 2015.

Ricke has published 387 peer-reviewed journal articles in 174 publications in the last decade alone, said Jeyamkondan Subbiah, head of the department of food science at the Dale Bumpers College of Agricultural, Food and Life Sciences at the University of Arkansas.

“His scholarly research is phenomenal,” Subbiah said. “The most impressive achievement is his effective training and mentoring of his students and post-doctoral fellows, who have gone to high level positions — 23 faculty members around the globe, four in government, 13 in the food industry and 11 others — and have multiplied across the globe.”

Subbiah said Ricke and his team had raised more than $27 million from federal funding agencies, commodity groups and the food industry since 2006 to support scientific research.

“Dr. Ricke has been an extremely productive researcher over the past 25 years, and his research on Salmonella has had a significant impact on advancing the science to better control this important food pathogen,” Muellenet said. “This is a very well deserved honor and a recognition of Steve’s international reputation.”