By Mary Hightower
U of A System Division of Agriculture
Aug. 13, 2019

LITTLE ROCK – Arkansas’ soybean acreage has dropped to its lowest point since 1960, according to the National Agricultural Statistics Service crops resurvey figures released Monday.
When NASS released its June 30 acreage report, the organization said it would resurvey soybean and cotton crops in Arkansas, as a wet spring and flooding delayed planting or forced replanting. (See: http://bit.ly/ArkAcreage19) 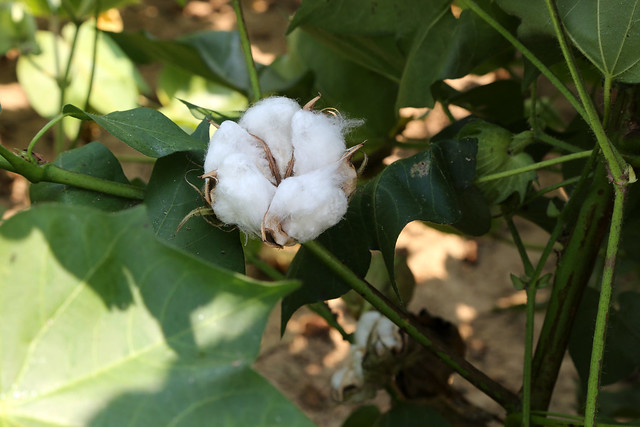 “The standout stat in this is soybean acres,” said Scott Stiles, extension economist for the University of Arkansas System Division of Agriculture. “If my eyes don't deceive me, that would be the lowest soybean harvested acreage since 1960 – which clocked in at 2.44 million acres.

“NASS conducted its survey for the June Acreage report around June 1,” he said. “At that time, Arkansas' cotton acreage was estimated at 91 percent planted. Soybeans were estimated to be just 54 percent planted, versus the five-year average of 79 percent.”

Jeremy Ross, extension soybean agronomist for the Division of Agriculture, said he was surprised at the new NASS number.

“I thought we might be slightly below 3 million acres, but not 300,000 acres from the previous estimate,” he said. “I believe that the acreage could go up some because additional acreage of soybean was planted after the survey deadline.”

Ross said he saw farmers planting beans during the first week of August as he drove across the state.

“The bigger surprise is the state average yield at 51 bushels per acre,” Ross said, adding that he was expecting the state average yield to be somewhere in the mid 40s. “Depending on the weather conditions for the remainder of the season, we could have some good yields, but over half of your soybean crop was planted after the first of June.

“I’m hoping the remainder of the growing season has moderate weather conditions and we don’t have an early frost,” he said.

Cotton
Stiles said that the 610,000-acre figure for 2019 would be the fourth year of increasing cotton acres, and the highest since 2011 — a substantial leap over the 480,000 acres harvested last year.

By comparison, the Boll Weevil Eradication Program showed 587,868 cotton acres enrolled in Arkansas as of July 30.

“Cotton picked up some acres as corn planting was delayed further and further,” Stiles said.

Bill Robertson, extension cotton agronomist for the Division of Agriculture, said, “It’s hard to argue now, but at one time at the end of May, we figured we were lucky to break 500,000 acres.”

Robertson also offered this prediction: “Give us $5 corn and cotton will crash.”

Other crops
“In my opinion, the NASS corn, cotton, and soybean acres align very closely with the Farm Service Agency’s certified acreage report, also released on Monday,” Stiles said. “I think we may see some further adjustments in rice acreage – perhaps some increase in medium grain acres and some reduction in long grain.

“FSA will continue to provide monthly updates of certified acreage through January,” he said. “However, what was released today by FSA likely won't change a great deal over the coming months, and a 2 percent increase in FSA planted acres from August to January is normal.”

Jarrod Hardke, extension rice agronomist for the Division of Agriculture, said the total rice acres in the NASS report were very close to expectations. Like Stiles, he expects to see a slight rise in future reports.

Jason Kelley, extension wheat and feed grains agronomist for the Division of Agriculture, said there were “no real big surprises on corn compared to earlier reports. The 780,000 acres is a  slight reduction from earlier report, and the 180 bushels per acre state average yield. It would be on par with the seven-year state average yield. As future reports come out, they will likely provide a better picture on yields.”

There was no change in the long or medium grain rice numbers from the June acreage report, which put rice at 1.27 million acres, versus 1.42 million acres in 2018. Of that total, 1.125 million acres are long grain. Medium occupies 150,000 acres.