By Fred Miller
U of A System Division of Agriculture
April 26, 2019 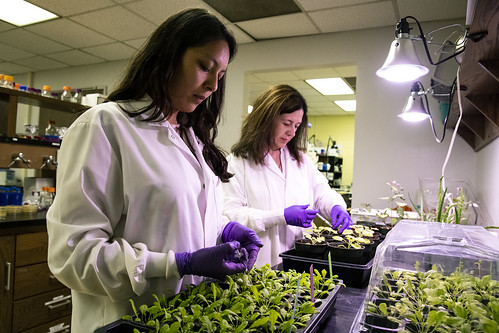 “The research that will be pursued in Dr. Rojas’ Career Award is a great example of the important and innovative research our faculty are conducting across the university,” said Jim Coleman, provost and executive vice chancellor for academic affairs.

“Additionally, receiving such a competitive award reflects the high level of respect her peers have for the impact of her previous work and the potential importance and the quality of the proposed research project,” Coleman said.

Rojas, assistant professor of plant pathology for the University of Arkansas System Division of Agriculture and the U of A’s Dale Bumpers College of Agricultural, Food and Life Sciences, studies the molecular and cellular interactions between bacterial pathogens and plants to dissect how bacterial pathogens cause disease and how plants fight those pathogens.

Rojas plans to integrate her research program with her teaching by recruiting undergraduate students to help her probe how the myriad proteins activated in both plants and bacteria contribute to either infection or defense.

Rojas said plants can detect when a pathogen is trying to infect them and they respond by activating multiple defenses to restrict pathogen proliferation and prevent tissue damage. Among those defenses are the fortification of the cell walls against the intrusion of the pathogen and release of antimicrobials to fight back.

“This is very clever,” Rojas said, “because the cell wall is the first point of contact by the pathogen.”

The goals are simple — the pathogen needs to get into the plant in order to reproduce and the plant needs to keep it out to remain healthy.

“It’s like they know what they’re doing,” Rojas said.

The pawns in this biological game of chess are the proteins that take offensive or defensive actions. There are perhaps hundreds of specialized proteins that throw themselves against the cellular bulwarks.

“It’s a scaffolding of proteins that build up in combinations to do a job on both sides,” Rojas said.

In her research for the Arkansas Agricultural Experiment Station and the University of Arkansas, Rojas uses the model plant Arabidopsis thaliana, a commonly used plant because its genetics are well defined. She can genetically modify plants to generate new versions of proteins tagged with fluorescent markers to see inside living cells and explore how these proteins respond to pathogens.

Rojas said her work is basic science and, therefore, does not have immediate practical application. However, “poking and probing at this basic level leads to discoveries that provide us a better base of knowledge,” Rojas said.

That foundation of knowledge is used by other scientists to develop new technologies to protect America’s and the world’s food supply. Rojas said. “Truly understanding how cells work is worth the effort.”

But it’s a massive effort. “We have found a bunch of proteins and we need to figure out what they do,” Rojas said. “We need an army of researchers.”

That’s where the education side of Rojas’ Career Award plan connects.

The students would have to read the research literature, develop hypotheses and design experiments to test them.

“I hope to identify talented and motivated students to join in the research and discovery,” Rojas said.

Undergraduate students will have the opportunity to contribute to important research that will have an impact on the future of agricultural production of food and fiber, Rojas said. Her hope is that some of them will choose a career in science.

“Through research and teaching, I can pass on a legacy to a future generation of researchers,” Rojas said.