With 2019’s rough weather behind them, Arkansas Flower and Garden Show board members begin thinking about 2020: A Garden Odyssey
skip to main content
News - 2019

With 2019’s rough weather behind them, Arkansas Flower and Garden Show board members begin thinking about 2020: A Garden Odyssey

By Ryan McGeeney
U of A System Division of Agriculture
April 5, 2019

LITTLE ROCK – After nearly three decades, the Arkansas Flower and Garden Show has seen its share of of highs and lows. And while the freezing rain of early March dealt both attendees and organizers a tough hand in 2019, it hasn’t deterred board members from looking forward to what’s expected to be a landmark year for the show in 2020. 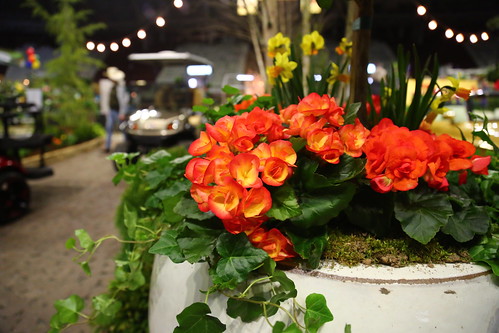 “We’ve taken a look at our survey responses from the 2019 show, and are prepared to make changes and improvements in 2020,” said Mary Beth Rogers, executive director for the Arkansas Flower and Garden Show.

2019 was the show’s second consecutive year at the Arkansas State Fairgrounds. While the location offers vast amounts of free parking, as well as logistical advantages for vendors, some attendees found travel between the four buildings that house different aspects of the show difficult or confusing.

“In 2020, we’ll be bringing back a fleet of volunteer-driven golf carts to shuttle attendees to their chosen destinations,” Rogers said. “That was very popular when we tried it in 2018, and we’re happy to do it again.”

Rogers said she would like to concentrate on increasing the show’s “wow factor,” and continuing to distinguish the Arkansas Flower and Garden Show — the largest of its kind in the state — from other, similar shows.

“We’ve had seven of the most interesting, beautiful living garden displays at the shows for several years in a row, and I’d like to build on that however we can,” she said. “But of course, we don’t want the show to essentially look the same from year to year.”

The 2019 show featured 19 new vendors, among the dozens who participated. Rogers said the board is as interested in meeting the needs of vendors, old and new, as it is in making the show a must-see event every year.

“The fairgrounds offers us a lot as a location, but we’re still hoping make things even more appealing,” she said. “We’re hoping to bring in a selection of independent food trucks in 2020, and we’re considering bringing back the Sunday tea party, with brunch in the gardens, something the show has done in the past.”

The Arkansas Flower and Garden Show, which is a non-profit entity, uses the vast majority of its profits to fund Greening of Arkansas community beautification grants, as well as scholarship for college students studying horticulture in Arkansas. To learn more about the show and its efforts, visit www.argardenshow.org.