By Ryan McGeeney
U of A System Division of Agriculture
Oct. 6, 2017

HELENA, Ark. – As the dry weather that dominated September and the first days of October speeds the Arkansas soybean harvest along, growers’ yields face a bottleneck as grain elevators and barges struggle with low water levels on the Mississippi River. 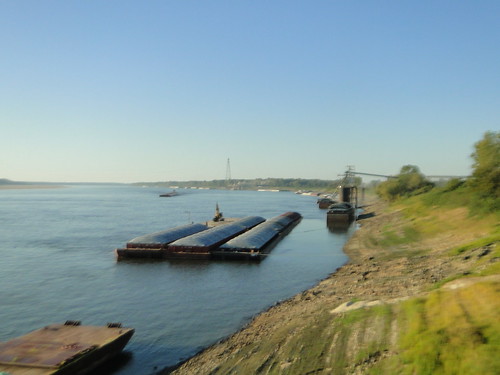 “Over the last day or two, I’ve heard reports that some of the elevators on the rivers are having to shut down,” Ross said Wednesday. “Barge traffic has slowed down because of the low water. Operators aren’t able to load them as heavily before pushing them down the river.”

As of Friday morning, the Mississippi River measured at -6.4 feet at Memphis, according to data from the National Weather Service, more than 11 feet below what is considered the river’s “low stage” at that location.

Robert Goodson, agricultural agent for the Phillips County Cooperative Extension Service office, said the bottleneck has forced many growers to put grain either into private storage, or temporary storage provided by the grain elevators.

“Usually, the elevator operators will store it for four or five days at no cost — basically, you’ve got about that much time to sell it,” Goodson said. He said a significant amount of grain has accumulated along the banks of the river in Helena.

“Right now, we’ve got about three corn piles, about 3 million bushels, stacked on the ground out there,” he said. “Three million bushels at $3 — that’s a pretty good chunk of money.”

The low river levels seem an almost inevitable side effect of the dry weather that helped the Arkansas soybean harvest speed toward its conclusion. According to an Oct. 2 report from the U.S. Department of Agriculture’s National Agricultural Statistics Service, 47 percent of Arkansas soybean acreage had been harvested as of Oct. 1, 9 percent ahead of the state’s five-year average for that point in time.

Ross said soybean growers faced major pest pressure this season from the redbanded stink bug, an insect native to tropical and subtropical regions. A mild winter in 2016-2017 allowed the insect to overwinter in relatively northern regions, including the bootheel area of Missouri, giving the pests a head start this spring. (Read more about the redbanded stinkbug’s incursions into Arkansas here.)

Ross said the insect’s destructive behavior, as well as its resilience against pesticides, will likely have some impact on growers’ bottom lines.

“When they feed, they secrete and enzyme that degrades the seed,” Ross said. “Farmers are getting docked because of damaged seed. On the other side, there’s the extra cost of trying to control them. People have had to spray as many as three to four times for these things. Late in the season, a lot of these guys have exhausted their money, with everything else that’s gone on in the season.”

Despite some flooding in August and September that resulted in some soybean acres remaining submerged for more than a week, Ross said the state’s overall production will likely be above average.

“Overall, it’s been a really good year,” he said. “I think we’re probably going to set a new state record for production, with the yields I’ve been hearing about so far.”