By Ryan McGeeney
U of A System Division of Agriculture
March 24, 2017

LITTLE ROCK — Entomologists with the University of Arkansas System Division of Agriculture said this week that the mild winter of 2016-2017 will likely mean Arkansas producers — especially those in the state's southernmost counties — will face renewed pressure in soybeans from two pests that only recently appeared in Arkansas. 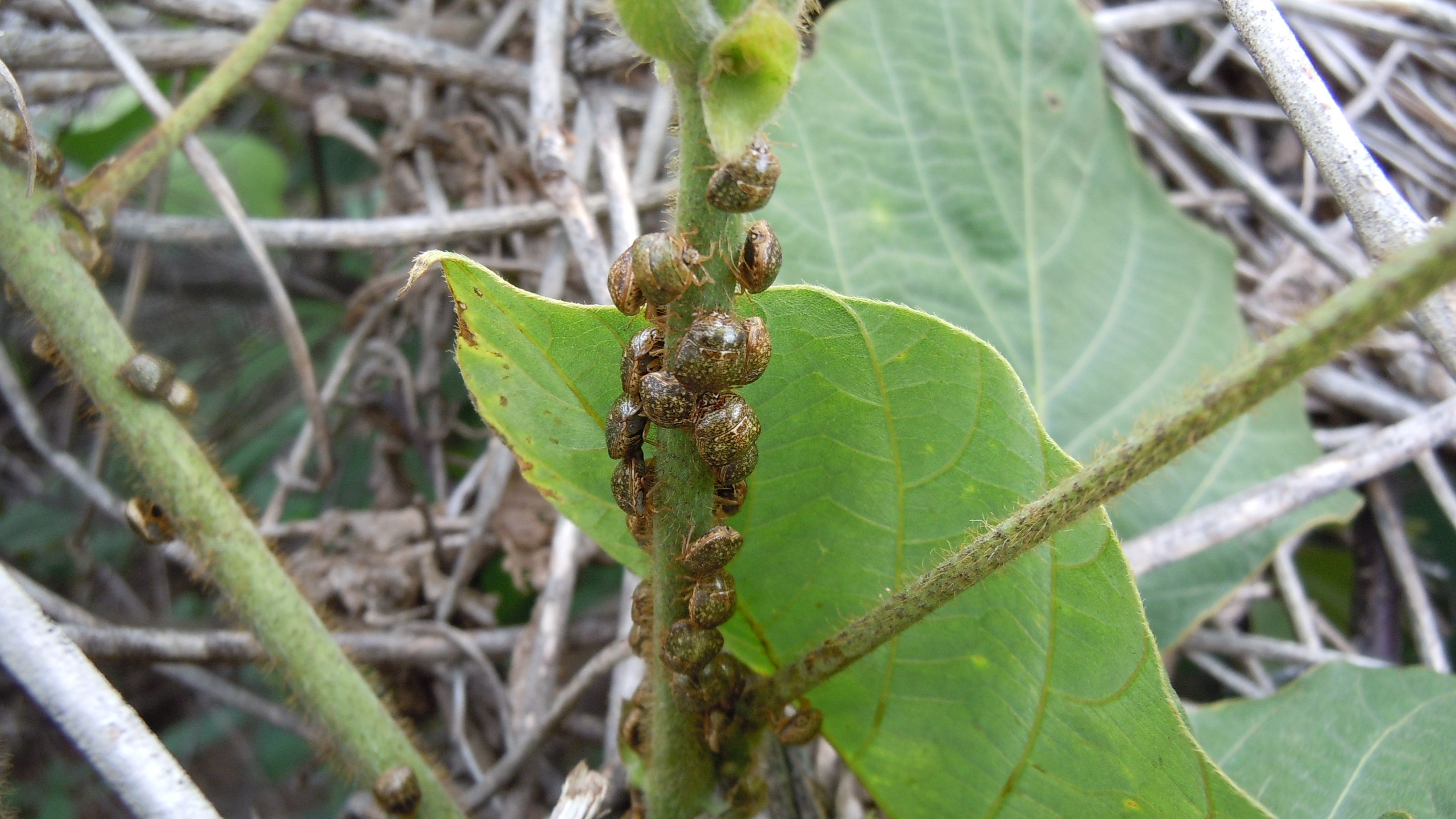 BUGGED -- Kudzu bugs have been detected in at least seven counties throughout Arkansas; row crop experts suspect they may begin to damage soybean crops in 2016. Image courtesy of Nick Seiter.

Gus Lorenz, extension entomologist for the Division of Agriculture, said kudzu bugs, which reached damaging levels in Arkansas for the first time in 2016 in one small area in Phillips County, are expected to show an increased presence in the state this year. Similarly, redbanded stinkbugs, which appeared in the southern tier of Arkansas counties several years ago but were confirmed as far north as Marianna in 2016, are expected to be a much bigger problem in 2017.

“Overall, we had a pretty mild winter this year, and we expect that both kudzu bugs and redbanded stink bugs overwintered extremely well,” Lorenz said. “We probably didn’t get good winter mortality for those insects, which means they’re going to enjoy a geographical advantage this summer.”

Redbanded stink bugs, which are tropical or sub-tropical in origin, have created problems for growers in the southern portions of states including Texas, Louisiana, Mississippi and others for years, Lorenz said. As the growing season progresses and warm temperatures move northward, the insects follow. While Arkansas growers are no stranger to several other species of stink bugs, the redbanded variety was only first confirmed in Arkansas a few years ago. But hard winters set back the insects’ northern march, and Arkansas growers were essentially free of them until last year.

Like other stink bugs, the redbanded stink bug uses piercing-sucking mouthparts to puncture the pods and feed on the seeds of soybean plants. However, controlling the pests can require growers to use tank mixes of insecticides for the best control, and often requires more frequent applications than when dealing with stink bug species more common to Arkansas.

Nick Seiter, extension entomologist for the Division of Agriculture in Monticello, said the redbanded stink bug represents a much greater threat to Arkansas soybeans than the kudzu bug in terms of potential yield loss.

“They do the same kind of damage as brown and green stink bugs — they just do more of it,” Seiter said. “They’re more damaging, they’re a little harder to kill than our other stinkbug species, and they’re very mobile, so they’re more apt to reenter fields after they’ve been controlled.”

Gus Wilson, staff chair for the Cooperative Extension Service office in Chicot County — located in the state’s southeastern corner — said feedback from producers in his county indicated a distinct concern regarding the redbanded stink bugs in the area.

“Their presence here last year just made pesticide costs go up,” Wilson said. “We saw it more heavily in the southern half of the county than the northern half. Of course, we’ll do more scouting this year. Since it’s been such a mild winter, the assumption is that they’re going to give us more problems.”

Lorenz said one of the favored wild hosts for rebanded stink bugs is crimson clover, which can currently be seen blooming all over the state, often near roadsides. He said he and Seiter will begin scouting crimson clover patches throughout the state in April to determine “how far north they have survived.”