By Ryan McGeeney
U of A System Division of Agriculture
Jan. 13, 2017

CARLISLE, Ark. — The first of the University of Arkansas System Division of Agriculture’s annual series of production meetings began this week, as agronomists and other experts visited farmers and industry consultants across Arkansas to give their assessments of both the year that was — and the year that will be — for the state’s largest industry. 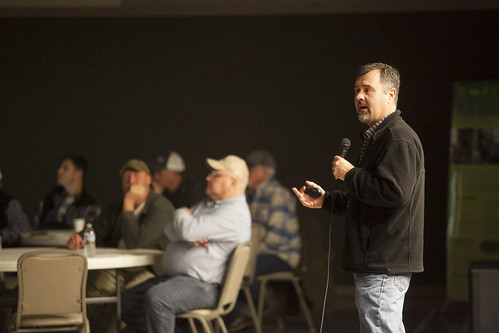 Tuesday, Division of Agriculture experts addressed a crowd of about 80 in Carlisle, speaking about corn, soybean and rice production, as well as disease and weed control.

Jason Kelley, extension wheat and feed grains agronomist for the Division of Agriculture, spoke to Carlisle crowd primarily about corn — about 760,000 acres of which was harvested in Arkansas in 2016, a significant increase from the previous year.

Kelley said that regardless of which crops were being grown, remaining profitable in 2016 was one of the biggest challenges faced by producers across the state.

“Within each crop there were specific problems such as too much heat, too much or too little rain, wind damage that all negatively impacted yields,” Kelley said. “Any time lower-than-anticipated yields occur along with low grain prices, this creates problems. The one positive was that some of our input costs such as fertilizer, which is one of the largest input costs, was cheaper than in previous years.”

Gus Lorenz, extension entomologist for the Division of Agriculture, said that although crops across the state faced insect pressure throughout the growing season, many growers seemed to be ignoring the available research on thresholds — the point at which spraying an insecticide becomes profitable, rather than overkill — and ultimately wasting money on unnecessary applications.

“We’ve got to quit doing applications the moment we see the first bug,” Lorenz told the crowd. “At the very least, we’ve got to get our money back out of it.”

Bob Scott, extension weed scientist for the Division of Agriculture, spoke about the other side of the pest control coin: weeds, and the accelerating threat of PPO-resistant Palmer amaranth, commonly known as pigweed, in soybeans.

“In some fields, we are now one herbicide away from not being able to control pigweed in soybeans,” Scott said. He attributed to growing problem to over-reliance on a limited number of modes of action, and encouraged growers to rotate crops and consider other approaches to controlling weeds.

Regardless of cost-saving measures, 2016 was a difficult year for many Arkansas growers. Loy Kee, a Prairie County grower who said he farmed about 750 acres each of soybeans and rice in 2016, said he often had no choice but to trim corners where he could.

“You’ve still got to make a crop, and there’s only certain things you can cut,” Kee said. “It’s the same story, whoever you talk too. Very few people I know didn’t have a complaint about yield. I was fortunate to even have a bean crop — for some folks, even that fell off.”

“The primary challenge, across all crops, will be to remain profitable with depressed grain prices,” Kelley said after the production meeting. “Most producers have cut as much as practical out of the production budgets so there is not much to trim these days.  We have to make the best yield with the least amount of inputs, which is a difficult task.”

Looking toward 2017, Kee said he was hopeful that a new incoming U.S. President might spell good news for agriculture.

“We’ll see what President Trump can do for us,” he said. “And hope commodity prices change.”

Between now and the end of March, Division of Agriculture staff are scheduled to conduct more than 20 production meetings across the state. An updated schedule can be found athttp://www.uaex.uada.edu/farm-ranch/crops-commercial-horticulture/ag-tech-calendar.aspx.