By Ryan McGeeney
U of A System Division of Agriculture
April 29, 2016

LITTLE ROCK — Kudzu bugs, silently building their numbers since 2014, are now poised to be a threat to the state’s soybean crop. 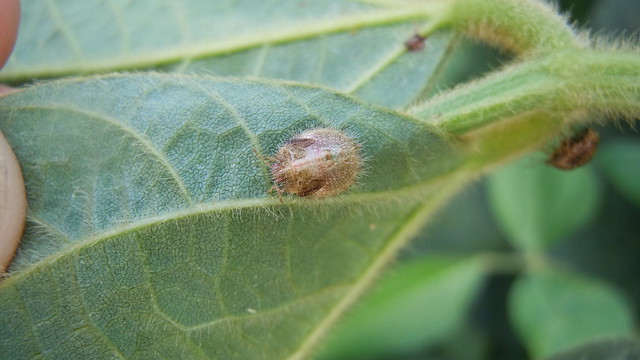 Gus Lorenz, extension entomologist for the University of Arkansas System Division of Agriculture, said he and his staff have received reports of the pests from northeastern Arkansas, including Poinsett, Mississippi and Crittenden counties. Lorenz said the insects were found during pest sweeps of test plots at the Division of Agriculture’s Lon Mann Cotton Research Station in Marianna in recent days.

Since their initial detection, the pests have primarily remained in kudzu, although they were found in soybeans in non-damaging numbers in 2015. Lorenz said that in 2016, however, the bugs will likely pose a threat to the crop.

“We’re expecting to see damaging levels this year,” Lorenz said. “Last year, they never rose to the treatment threshold, but this year, we’re seeing them a lot more frequently, and they’re increasingly moving from kudzu to soybeans as they seek a new host.”

Adult kudzu bugs are olive green to brown with a box-like shape, similar to a ladybug. Newly hatched nymphs are orange, about the size of a pinhead, and stay close to the eggs, while older nymphs are green, oval-shaped and hairy.

Adult kudzu bugs are olive green to brown with a shape similar to a ladybug. Newly hatched nymphs are orange, about the size of a pinhead, and stay close to the eggs, while older nymphs are green, oval-shaped and hairy.

The kudzu bug feeds on plant sap, which it sucks from the stems of kudzu, soybeans and other related plants. Kudzu and soybeans are the most important hosts, although they will also develop on closely related legumes such as edamame and black-eyed pea. Adults often congregate on wisteria and some edible beans, but the survival of nymphs is low on these plants. Peanut, alfalfa and clover are not hosts.

Large numbers of immature kudzu bugs can cause yield losses in soybeans, and adults can be a nuisance if they enter homes in the fall in search of a place to spend the winter.

If you treat them as soon as you find a single nymph in an entire field, you’ll just have to go out and treat them again,” Lorenz said. “When you treat with pyrethoids, you open the door for other pests, because you’re also killing all the beneficial insects. With this particular bug, you just want to wait.”

A native of Asia, Kudzu bugs were first discovered in the United States in 2009. In 2014, the bugs were found in Crittenden County and in 2015, had spread to six other counties in Arkansas: Mississippi, Lee, Ashley. St. Francis, Phillips and Poinsett. (See: http://www.uaex.uada.edu/media-resources/news/september2014/09-08-2014-Ark-Kudzu-Bugs.aspx)