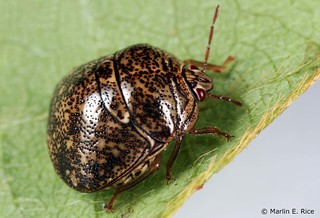 BUGGED -- This tiny kudzu bug has caused big problems for soybean growers across the South. It may just be a matter of time before this pest shows up in Arkansas. (Image courtesy Marlin E. Rice, Pioneer Seed.) Credit mandatory.

MARION, Ark. -- Kudzu bugs, a fast-moving, invasive pest of soybeans, has been confirmed in Arkansas, but the ones found in Crittenden County probably arrived too late to do any damage to the state’s bean crop, Nick Seiter, extension entomologist for the University of Arkansas System Division of Agriculture, said Monday.

Kudzu bugs, a native of Asia, were first found in a handful of counties in Georgia in 2009. Since then, their range exploded to span the South. Last December, Jeremy Greene, professor of entomology at Clemson, told those at the Tri-State Soybean Forum in Dumas that the bugs’ presence in Arkansas was not a matter of “if,” but “when.”

The bugs found by Seiter and Crittenden County Extension Agent Russ Parker were “late enough in the year that they’re unlikely to cause any economic damage,” Seiter said adding that these were relatively new arrivals, having been in Arkansas “at least six weeks, maybe a little longer than that.”

What should growers do? “For now, they don’t need to do anything but be vigilant,” he said.

Kudzu bugs are small, about one-sixth to one-quarter of an inch in length, and are olive green with brown speckles. They chew on, but don’t kill kudzu, and have become a pest by overwintering in homes and other buildings.

Seiter has been working with agents in counties along the Mississippi River to keep an eye out for the kudzu bug and another anticipated invasive, the brown marmorated stinkbug. There’s been no sign of the stinkbug so far.

Finding the kudzu bug just across the river from Memphis, Tennessee, is no surprise.

“Vehicle traffic is a big way they move to the west,” Seiter said. Eighteen-wheelers make good bug movers. “The kudzu bugs really like these vertical, shiny white, yellow and bright surfaces,” he said. “These semis are great places for kudzu bugs to fly and hide out.”

Parker said the insects were found in two kudzu patches near Marion, about five miles apart from one another.

“The patches are about two miles north of I-40 and 2-3 miles, as the crow flies, from the Mississippi River,” he said. “They could’ve come in on the railroad.

“We knew it was inevitable. They had to pick Crittenden County to come into,” he said, tongue-in-cheek.