FORT SMITH, Ark. – Fall armyworms, with their voracious appetite for grass, are giving commercial hay growers and homeowners a rough time this year, county extension agents for the University of Arkansas System Division of Agriculture said.

“Worse than I have ever seen in the 10 years I have been working,” said Lance Kirkpatrick, Sebastian County extension staff. “Homeowners are experiencing major problems.” 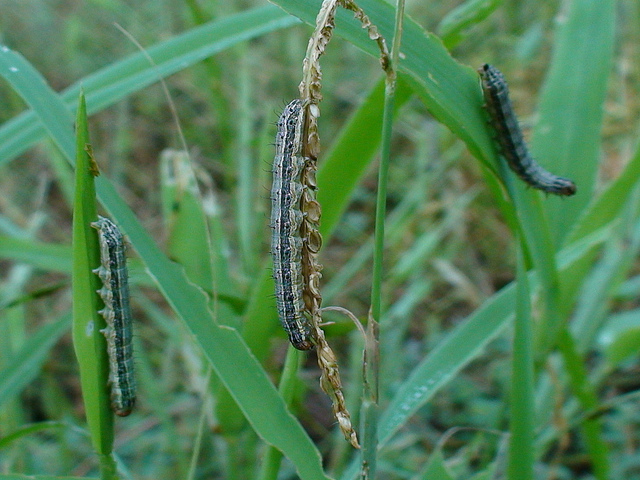 Fall armyworms, appear in late summer or early fall. As their name implies, they show up army-like groups and mow through pastures and lawns. The grass grows back, but does so slowly.

Jesse Bocksnick, Perry County extension agent for the Division of Agriculture said commercial hay growers had been the hardest hit in his county.

“Perry County has been catching it for a month-and-a-half. It’s pretty bad,” he said. “They came early and have stayed late.

“Some of them have sprayed four times for armyworms,” he said. “The places where producers had their hay under irrigation had it worst — when the weather got dry, their grass was the only place still growing” and highly attractive to the hungry caterpillars.

Newly hatched fall armyworms are light green or cream-colored with a dark head and measure about one-sixteenth of an inch long. As they grow, they darken in color and the heads have a light “Y”-shaped mark down the front. In addition, the next-to-last abdominal segment has four small dark dots. A full-grown fall armyworm is about 1.5 inches long.

Information about managing fall armyworms can also be found:http://www.uaex.uada.edu/counties/prairie/fall%20armyworm%20sheet%202015.pdf