Here is an update from Horticulture graduate student Morgan Gramlich on her study of value-added products from farmer's markets!

The purpose of this study was to track farmers market trends (produce availability, number of vendors selling a given produce item, and produce price) to determine the potential for producing value-added foods (jam, jelly, salsa, etc.) from farmers market surplus. Our goal was to reduce food waste and create value-added products that produce vendors or farmers markets could sell to increase revenue. The data collected was used to determine what produce was likely in surplus at a farmers market and when during the market season the surplus produce would be available at the lowest cost. The farmers market used for this project was The Original Rogers Farmers Market located in Rogers, Arkansas. Recommendations for potential value-added food products were made through the interpretation of data collected from this market.

The Original Rogers Farmers Market had about 20 vendors from Arkansas and Oklahoma, and 4-8 of these vendors sold produce during any given week. At this market, produce vendors were encouraged by the market manager to maintain their prices consistent with the weekly market average.  Data was collected on market days (Wednesdays and Saturdays) for fourteen weeks (June 2-September 5) during the 2018 market season. A visual evaluation of produce availability and price for selected produce items was collected during every market. The number of times produce vendors had items for sale (estimate of availability) and the price of those items throughout the season was evaluated. Availability was calculated as number of vendors selling a given item (%) multiplied by the number of markets out of the total (%) in which the item was available.  Data for the market season was used to determine what value-added products would be the lowest cost to develop given produce availability, number of vendors selling the item (estimated volume), and produce price.

Seasonal trends for the top five most available produce at the farmers market were evaluated. Then this data was used to determine what weeks had the highest number of produce vendors with the specific item, and what weeks had the lowest prices for those items.

The percent of produce vendors at The Original Rogers Farmers Market selling the five most available produce items by week were evaluated (Fig. 1). The peak for tomatoes was from July 18-August 8 when more than 80% of vendors had tomatoes. All of the vendors (100%) had tomatoes on July 18th and August 1st, 4th, and 8th. There were many weeks where most vendors had squash and zucchini. All of the vendors (100%) had squash and zucchini on June 6th, 9th, and 30th and July 7th, 14th and 18th.  From June 23-July 18 more than 85% of vendors had squash and zucchini at every market. All of the vendor had cucumbers on July 18th and had onions on June 6th and 9th and August 29th. From June 20-July 7, 60-70% of vendors at the market had cucumbers; and 65-100% had cucumbers August 8-September 5. 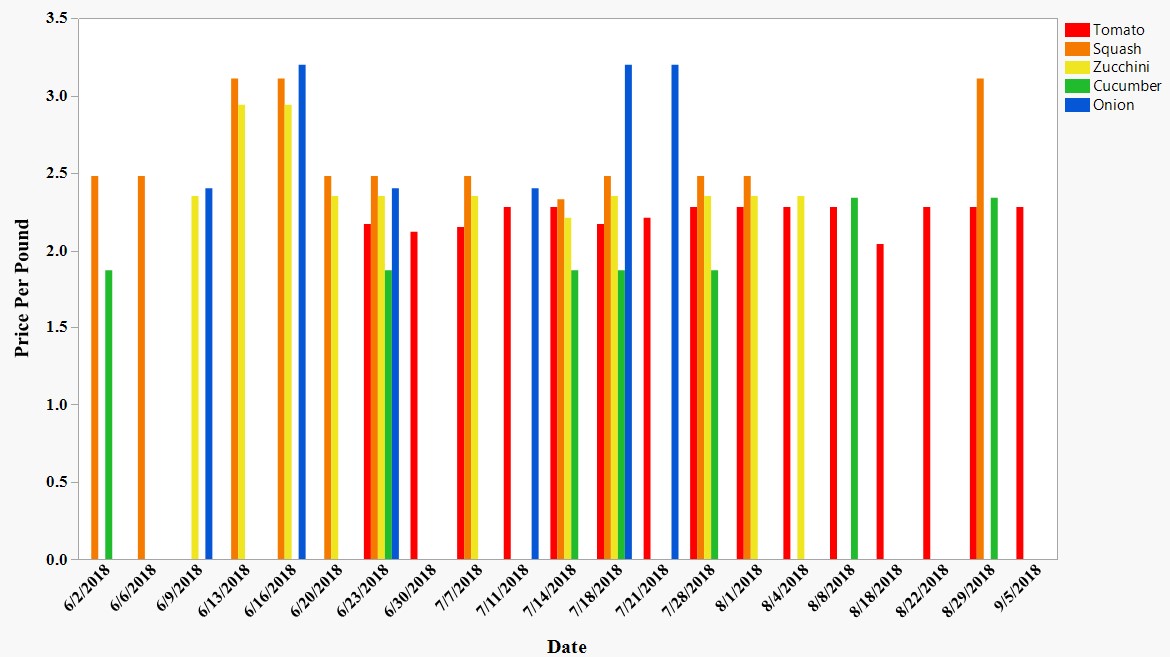 Recommendations Based on Evaluation

The data showed that tomato, squash, zucchini, cucumber, and onion were the most commonly sold produce items at The Original Rogers Farmers Market and sold by the greatest number of vendors. These produce items were most likely in surplus at the farmers market and available for value-added food production.

It is recommended to develop products that contain large quantities of these produce items because of the significant discount produce vendors were willing to provide when they had surplus. Examples of economically feasible value-added products that could be produced from these items include tomato sauce, salsa, squash/zucchini flour, or pickles.

For more information on this project, please visit:

This project was funded by a Specialty Crop Block Grant from the Arkansas Agriculture Department, USDA (AM170100XXXXG030).