Amanda McWhirt shares her report on the Veteran's Day (Nov. 11th-12th, 2019) cold snap and the potential damage to fruit crops in Arkansas.

On Tuesday November 12th, 2019 many across Arkansas woke up to temperatures 40-50°F cooler than the previous day. 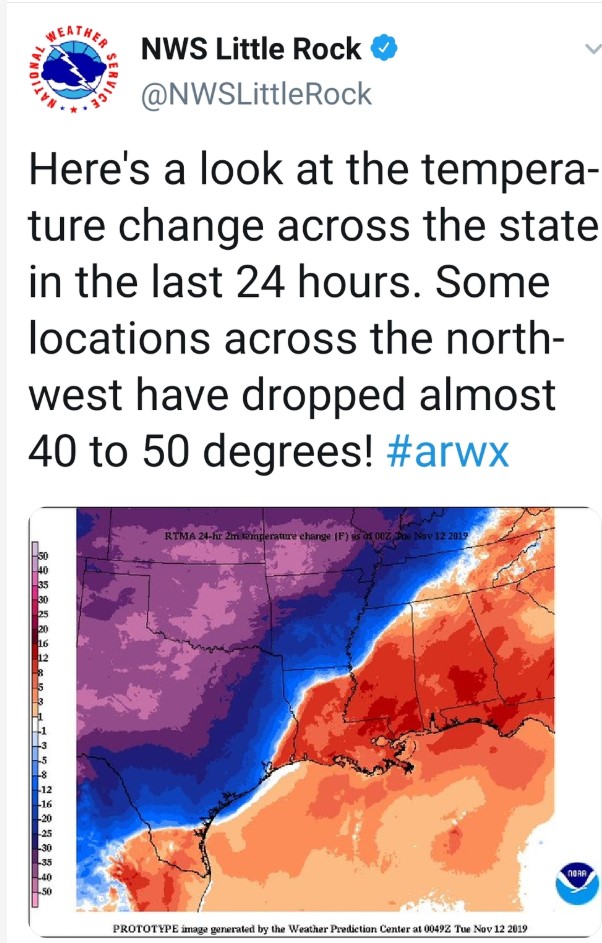 Twitter Post from the National Weather Service on Tuesday Nov 12th, 2019 stating that the state had massive temperature drops of over 40 degrees. 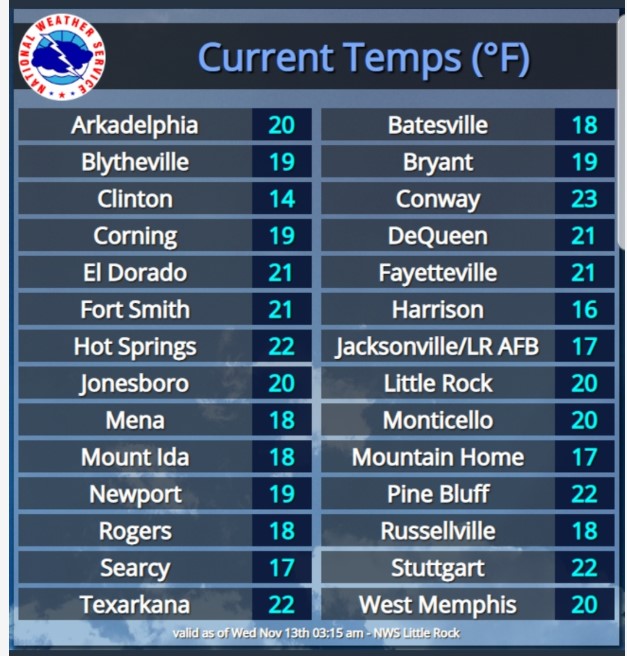 In some areas of the state the Veterans day freeze was the first major cold event many places experienced. This means that many plants may not have acclimated yet and may have been damaged even though the temperatures were above that which plants can normally withstand during dormancy. 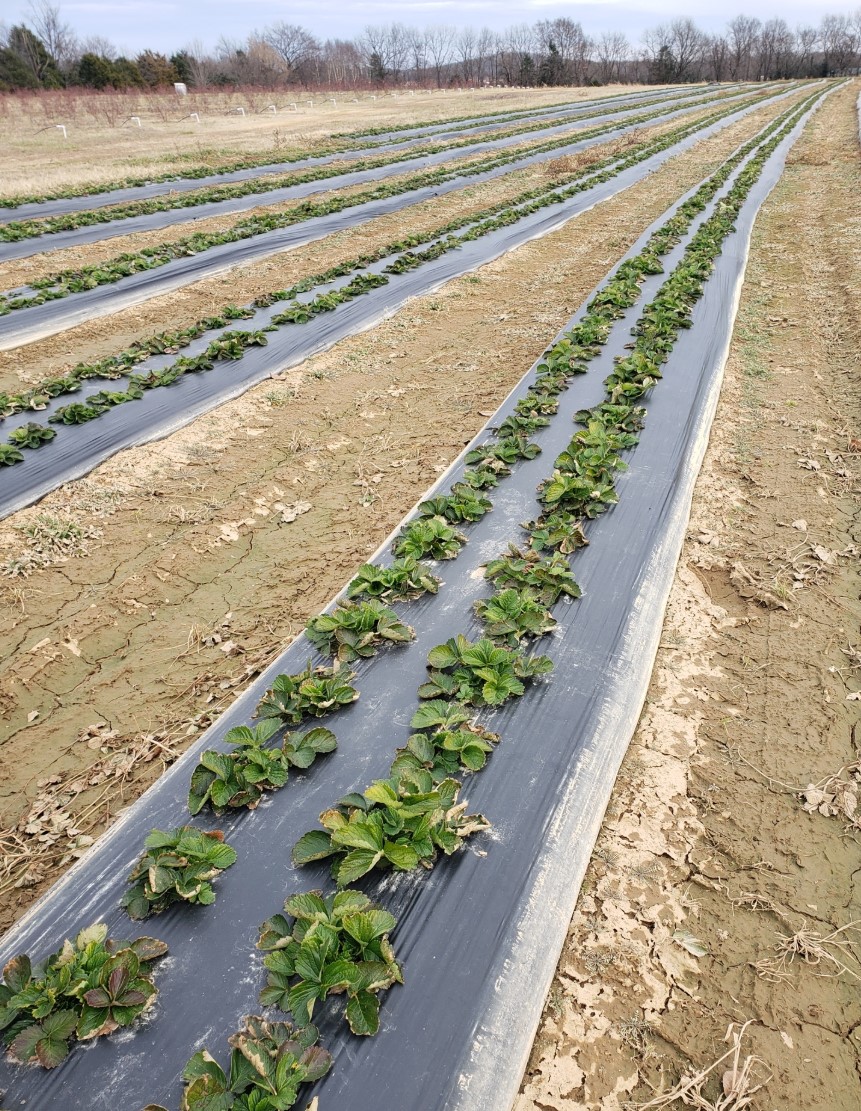 Strawberry field left un-covered, some leaf burn can be observed

Potential for damage to strawberry crops

The small fruit crop most likely to have experienced damage is newly planted strawberries. Strawberry crowns that are fully acclimated will experience damage at temperatures around 10°F or below. Leaves can be damaged around 22° F or below. Most strawberries had only been planted in late September or early October. The Northwest corner of the state had an earlier freeze that likely helped plants begin the cold acclamation process but other parts of the state had not had much cold weather yet.

The early occurrence of the cold weather also meant not all growers had their row covers ready or could only cover parts of their fields. Additionally, initial forecasts of rain occurring around the event meant there was a risk of applying a row cover and having it freeze to the plants which provides no protection and can severely damage the plants.

Starting a week after the deep freeze occurred and continuing through last week we cut strawberry crowns at four locations in AR to assess if any damage occurred. Below are my observations for each location: 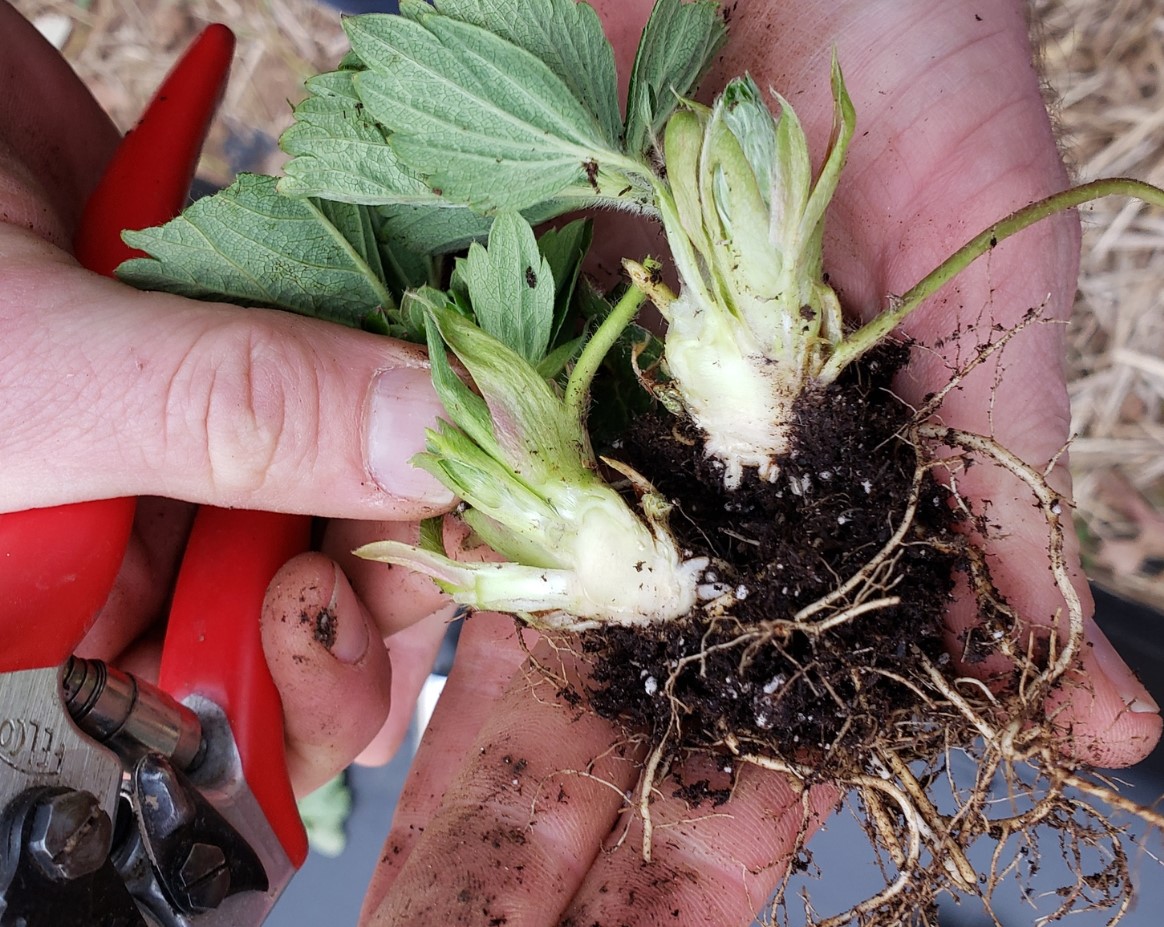 What does it mean that we are seeing damage in strawberry plants now? 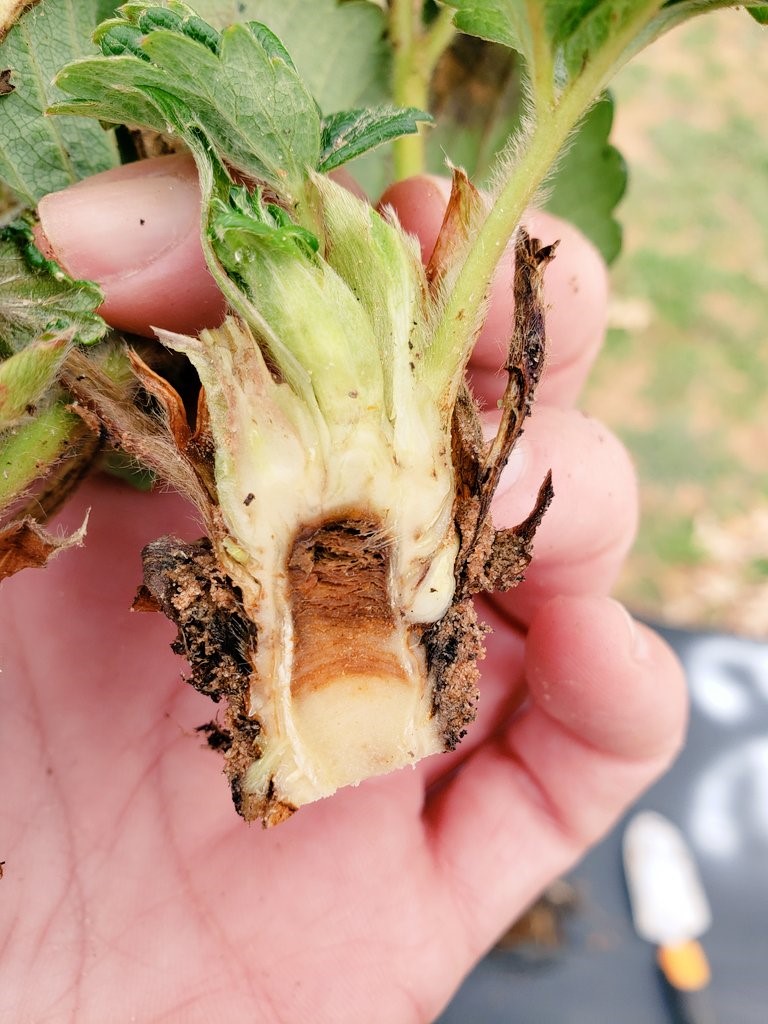 Strawberry crown with major pith darkening due to cold damage. The lower cambium and pith is still white which may mean the plant will recover and survive, but will have a significant yield reduction. (Hope, AR)

Most likely some yield loss will occur, but the severity is difficult to predict.

Strawberries in November should be doing the important work of building crowns and initiating floral buds in the crown for the next spring. Damage to the crown therefore means a likely reduction in the crown growth, floral bud initiation and ultimately yield.

Much of this depends on where in crown the damage is observed and the severity of damage.

Alternatively, damage to the crown can be more severe if the vascular tissue (cambium) AKA the plumbing for the plant is damaged. In the pictures below the cambium can be seen as the two clear white lines on either side of the crown. If this part of the crown is damaged the effect is more likely to result in severe reductions in yield and even plant death.

Crowns with minimal levels of damage to the pith will likely recover and still produce a crop.

We will have to wait and see what happens this coming spring 2020. 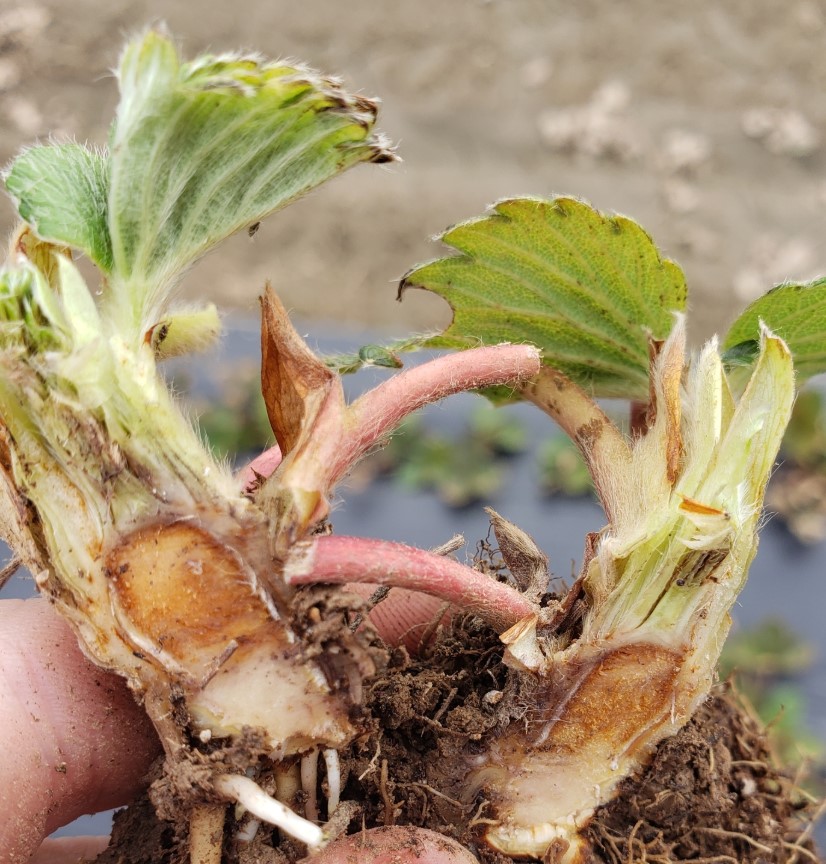 Strawberry crown with considerable pith darkening due to cold damage. The damage appears to extend beyond the cambium. This plant is likely to experience yield reduction. (Fayetteville, AR)

Strong and healthy plants tend to be more resilient and able to withstand cold temperatures. Much of this goes back to planting on time. Late planted crops didn’t get much time to grow off before the freeze event and will likely produce reduced yields compared to crops planted on-time.

Have row covers ready early in the fall and be aware of differences in cold susceptibility between varieties and locations in the field.

From the current survey it appears that Ruby June and Fronteras were more susceptible to cold injury during this freeze than some of the other varieties we looked at. This may be due to many other factors, but it is something we will continue to investigate. We will be doing cold damage assessments soon in our variety trial that was not able to be covered. We will report if we see any differences in susceptibility to cold injury among the 9 varieties we have planted.

I also looked at the buds of peaches, blueberries and blackberries and did not see major damage to buds. It is likely that we may not see the full extent of the damage from this cold event on many woody plants until the spring. Bark splitting is likely to occur on thin barked plants. Dr. Jim Robbins explains some of this here.