Center pivots offer the ability to irrigate fields that have surface slopes that make it impossible or impractical to irrigate with surface methods. They also offer more water management options than surface irrigation. The need for good surface drainage still exists with pivot irrigation and should not be overlooked.

Pivots are best suited for large square-, rectangular- or circular-shaped fields free of obstacles such as trees, fences, roads, power poles, etc. Field ditches are also a concern if the pivot towers must be able to cross them. Pivots can cover a range of acreage depending on the allowable length, but the common 1/4-mile system will cover approximately 130 acres of a 160-acre square field. It is also possible to tow a pivot from one field to another. It is usually best for a system not to be towed between more than two points during the season.

The biggest challenge with center pivots is the initial cost. However, it does offer some advantages that can justify the initial cost, especially when surface irrigation is not possible and the cost is spread over an expected service life of at least 15 years.

The concept of border irrigation is to flush a large volume of water over a relatively flat field surface in a short period of time. Borders are raised beds or levees constructed in the direction of the field's slope. The idea is to release water into the area between the borders at the high end of the field. The borders guide the water down the slope as a shallow sheet that spreads out uniformly between the borders. Most of the border irrigation in Arkansas has been used for soybean irrigation.

Border irrigation is best suited for precision graded fields that have slope in only one direction.

The crop should be flat planted in the direction of the field slope or possibly at a slight angle to the slope. Planting across the slope tends to restrict the water flow, especially on fields with less than 0.1 ft. fall per 100 feet. Fields with slope in two directions are not as well suited to border irrigation, but it may still be possible if the borders spacing is relatively narrow.

Border irrigation will not work on all fields and is not necessarily a better method where the crop is already grown on good beds and furrow irrigated. However, if a grower wants to move toward flat planting and reduced tillage on these fields, then border irrigation may be more appealing than flood.

Furrow irrigation can be a very effective irrigation method.  One of the biggest requirements for furrow irrigation is that the field must have a positive and continuous row grade.  This usually requires precision land grading, which can be rather expensive.  However, the grading results in positive field drainage that greatly enhances production.  The row grade should be a minimum of 0.1 percent and no more than 0.5 percent; row grades between 0.15 and 0.3 percent are especially desirable.

Furrow irrigation by necessity requires that there be some amount of tail water runoff from the end of the rows.  All the middles will not water out at the same rate, especially those that are wheel middles.  Also, cracking soils can make furrow irrigation management more challenging.  However, irrigating on the appropriate schedule will reduce the problems associated with too much cracking. 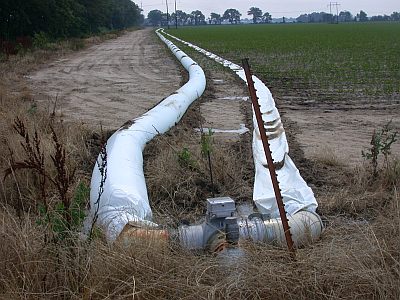 "Surge irrigation is a combination of computerized and mechanized methods used to improve the uniformity of water entering the soil down a row in a furrow irrigation system.  Water is introduced to one area of the irrigated field for a certain or period of time duration, then switched to a different irrigated area, then returned to the original area.  Surge valves automatically switch the irrigation water between lateral lines, on a timed sequence.  Switching back and forth is continued until the entire length of the furrow is watered."

"By pulsing, or surging, the water advances down the furrow faster than it would with the constant flow in a conventional furrow irrigation system, thus improving the uniformity of application of water throughout each irrigated furrow.  By decreasing the time needed to advance to the end of the furrow, deep percolation is reduced.  This is particularly true in coarse-textured soils.  Irrigators have reported the surge systems averaged between 20 percent and 30 percent reduction in water use per irrigation, depending on soil type and system flow rate."

Surge Valve Profile
This animation demonstrates how a surge valve can be used to improve furrow irrigation efficiency.
Watch the video

Flood irrigation with levees should really be thought of as flush irrigation. The challenge is to get the water across the field as quickly as possible. It is also important that irrigation is started before the crop experiences drought. If plants are drought stressed and then subjected to an extended wet soil condition, plant development can be delayed and some plants may die.

Levees are often broken in several places or completely knocked down to get the water into the next bay. Rebuilding the levee in time for the next irrigation is often difficult because the levee area tends to stay wet. Some growers install gates or spills in the levees to avoid irrigation delays due to rebuilding the levees between irrigations. When possible, it is recommended that gates or spills are also installed in the outside levee. This provides better drainage of a field in a situation where a rain occurs during or soon after the irrigation.

It is recommended that water not be allowed to stand on any area for longer than two days. This can be difficult on big, flat fields. Some growers are able to divide these type fields into two smaller fields when they start irrigating so they can better manage the water. If this isn't practical, then providing multiple water inlets to the field can be helpful. Multiple inlets help avoid running water too long at the top of the field in order to get water to the bottom of the field. One multiple inlet method is to water the upper half of the field from the pump discharge or riser and then run irrigation pipe or tubing from the discharge down the field to water the lower half. A canal or flume ditch alongside the field can also be used for multiple inlets. The water can be directed from the ditch through cuts or spills into individual bays down the length of the field.

Subsurface drip irrigation (SDI) is one of several types of micro-irrigation.  It is defined as "efficiently applying water directly to the root zone of plants by means of applicators operated under low pressure and placed below the surface of the ground."

"Water drips from openings (emitters) located at regular intervals along the pipe.  The pipe/tubing may be porous to allow further water seepage.  Less water is used in drip irrigation than with conventional methods."