Floods are one of the most common hazards in the United States, and one of the most destructive. Trees and water are interconnected. Floods are part of the natural cycle in many of the most fertile forested areas of the country. Some trees even rely on occasional flooding to flourish and grow.  In return, trees mitigate some of the damaging power of moving flood waters.

So what does flooding mean for the woodland owner?

How a flood affects your forest depends on many factors. One factor is the composition of your woodland. Trees such as bald cypress, tupelo, and green ash that are adapted to occasional floods are more resilient when waters rise. Trees with thicker bark fare better, as well, because the bark protects the tree from injury.  Another factor is the nature of the flood. The flood's duration, depth, and time of year are each important. 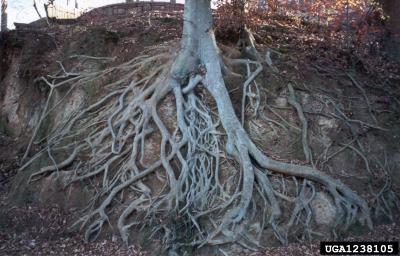 Root damage - If the flood waters are fast-moving, they can undermine root systems by washing away the soil around them. Undermined trees are more likely to fall, and exposed roots are more susceptible to drying out, freezing or disease.

Injury - Debris in fast-moving waters can wound trees, leaving them open to disease and decay.

Suffocation - Sluggish waters, deposited mud, sediment  and waterlogged soils deplete oxygen and suffocate trees. The higher the water line, the greater the damage. A tree's chance of surviving goes down if it's completely submerged during the growing season.

New growth - Flooding isn't always a bad thing for a forest. Floods can clear weaker trees and competing plants from the forest floor, bring in seeds, and stimulate growth of seedlings and surviving trees.

Flood injury symptoms include the following:

1) Yellowing or browning and wilting leaves,
2) Premature fall color and defoliation,
3) Twig and branch dieback,
4) Sprouting from the base of the tree, and
5) Tree death with severe flooding injury.

These symptoms may occur during or after flooding. Some trees may decline for several years and ultimately die after flooding injury while others may slowly recover.

The response to flooding depends upon the season, water depth, flood duration, water speed, and the age, health, and species of the tree. 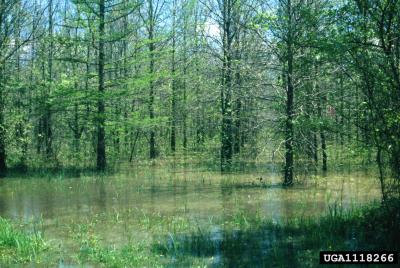 Season of flooding - The most potentially damaging flood time is late spring, just after the leaves have fully expanded. At this stage of growth, food reserves are low and the stress from flooding injury may kill a tree. After spring, flood tolerance increases with the season. During the winter or early spring, before tree growth begins, most deciduous trees can tolerate several weeks of flooding.

Flood intolerant trees can be injured by saturated soil conditions. Trees that are tolerant or somewhat tolerant of flooding usually are injured only if water covers the ground during the growing season or for extended periods during the winter. Almost all trees are injured if water covers the leaves. If only the lower branches are submerged, these may die while the remainder of the tree survives.

Water speed - When water stand, tree roots deplete the oxygen quickly.  Flowing water continues to supply some oxygen for the roots, so that flooding impacts are less severe.

Tree species - Not all tree species react the same way to flooding. Some species, those typically found along rivers, can survive saturated soils and flooding for a time, although growth will suffer.

An individual tree's tolerance depends on its age and health. Older and healthier trees can withstand a longer duration of flooding than younger or weak trees.

Damage - After the flood waters have receded, inspect the tree for mechanical injury. During the flood, tree trunks or branches may have been damaged by floating debris. Prune broken branches to reduce the chance of disease infection. With a sharp knife, carefully remove broken or torn bark.  Do not apply pruning paint to the pruning wounds or exposed trunk wood. Pruning paint will not speed the recovery and can increase, not reduce, the chance of infection. The only exception to this rule is American elm. This tree should receive a very light coating of paint on wounds to reduce the possibility of elm bark beetle infestation.

Sediment - If the flood has deposited sediment around the tree, remove this material and restore the original grade as far out as possible. Even three inches of new soil can smother intolerant tree roots. This must be done carefully. Some flood tolerant trees survive by quickly growing roots into the new layer of soil. If the tree has already grown roots into the new soil, do not try to restore the original grade. This activity may kill the tree.

Pests - It may take several years for a mature tree to recover from a single year of flooding. During this recovery time, the tree is stressed and vulnerable to attacks from insects and diseases. Inspect your tree several times during the growing season and identify and control any pest problems. In addition, speed the recovery of the tree by fertilizing them. Apply fertilizer in mid-fall at a rate not exceeding I pound of nitrogen per 1000 square feet of ground area. Higher rates of nitrogen fertilizer may further weaken the stressed tree.

Trees differ in their ability to tolerate flooding.  Flood tolerance ratings of some of the trees common to our area are listed in the table below.

There isn't much an individual can do to prevent flooding.  When rain is heavy and drainage is slow, flooding will occur.  There are a few things landowners can do to minimize damage from flooding:

Whether you're dealing with flood damage or preparing for the possibility of a flood, professional assistance can make your life easier. Some of the places you can go for assistance with your flood planning or recovery include: