The Cooperative Extension Service offers a host of educational programs and services.  If you do not see what you are looking for below, please contact our county Extension Office for assistance.

The Community, Professional & Economic Development unit has launched a community survey to assess major challenges facing communities and how they are responding to the COVID-19 pandemic. While assessing community needs is crucial, the survey also seeks to capture stories of resiliency - like organizing mutual networks, hand-sewing masks, and planning caravan birthday parties - to illustrate all the ways communities are demonstrating unity and cultivating support.Take the Survey by Clicking Here

Whether you have a large farm or a small home garden, the Miller County Extension Staff can assist you with your concerns. We offer a wide variety of education programs from beef and forage production to row crops to vegetable gardening and lawn care. Contact Jennifer Caraway, Miller County Extension Agriculture Agent for more research-based information on agriculture and home horticulture programs. 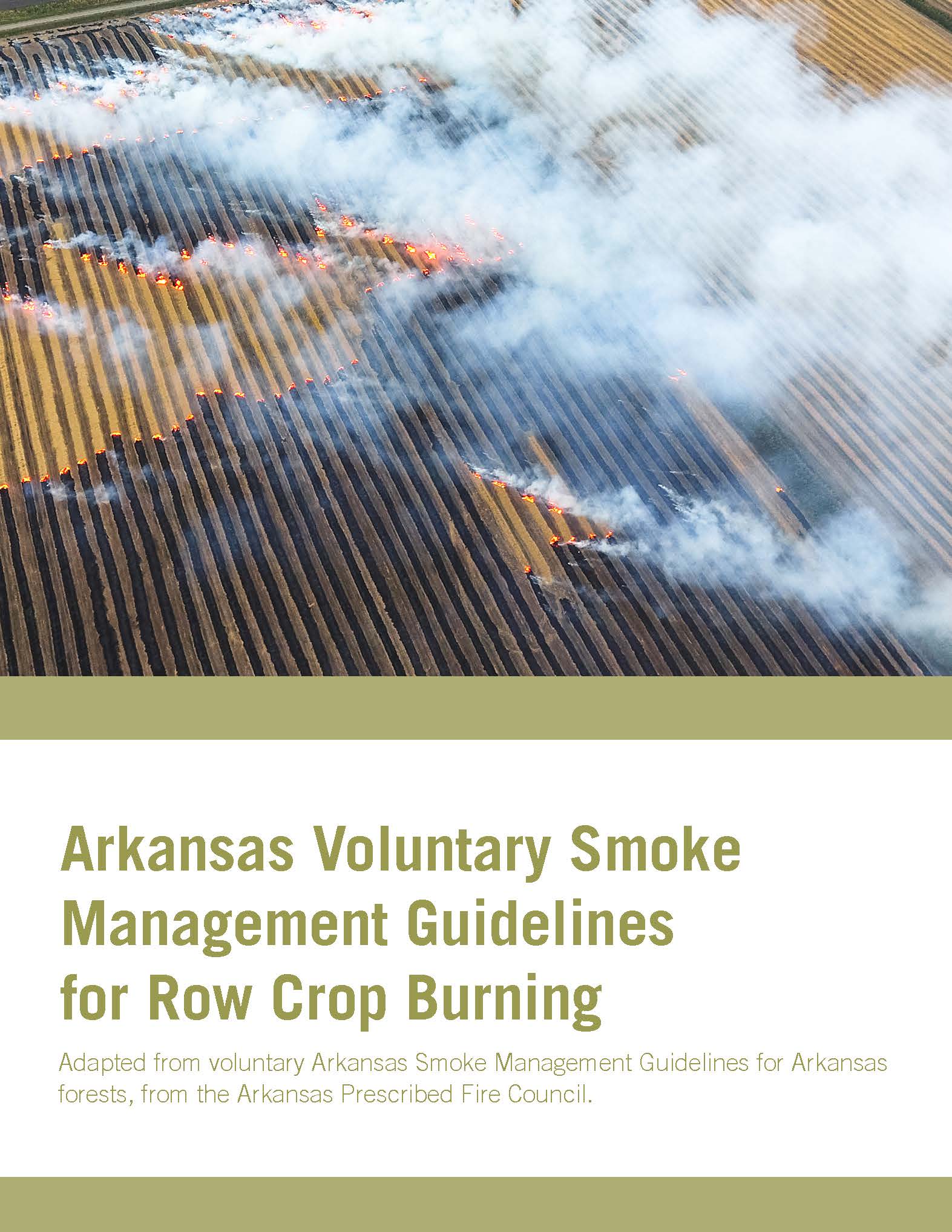 The Miller County Master Gardeners are accepting applications for their 2021 Fall Basic Training On-Line Training. Courses run from October 15 through December 15, 2021. Deadline for applying is September 27, 2021 (no applications will be accepted after that date). Please remit your training fee of $100 along with the application.

GET YOUR MG APPLICATION HERE 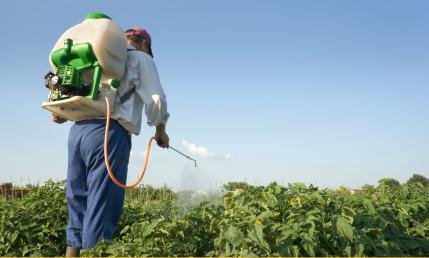 We are excited to announce that the online recertification program for private applicators is up and running. You can access it here: www.uaex.uada.edu/pat

This online training provides another opportunity for private applicators to get recertified. The online training is not designed for people that need to get their license for the first time – they still need to see us for that.

The online program has 5 different required modules with embedded questions in each that must be answered correctly in order to proceed. You cannot fast forward through the training or skip slides, but you can back-up to review information for the embedded questions. It should take a little over 2 hours to complete.

We have done our best to make the program interesting, informative, and the process self-explanatory for the user.  It is based on the platform we have used for the dicamba training the past two years, so it should work fairly smoothly.

The cost of the training is $20 and you pay online.

If you are in need of a new chemical license, click below to see what is available in our county as well as other counties within the state of Arkansas. There is also a waiting list section; if we get enough interest in a training, one may be held in our county. 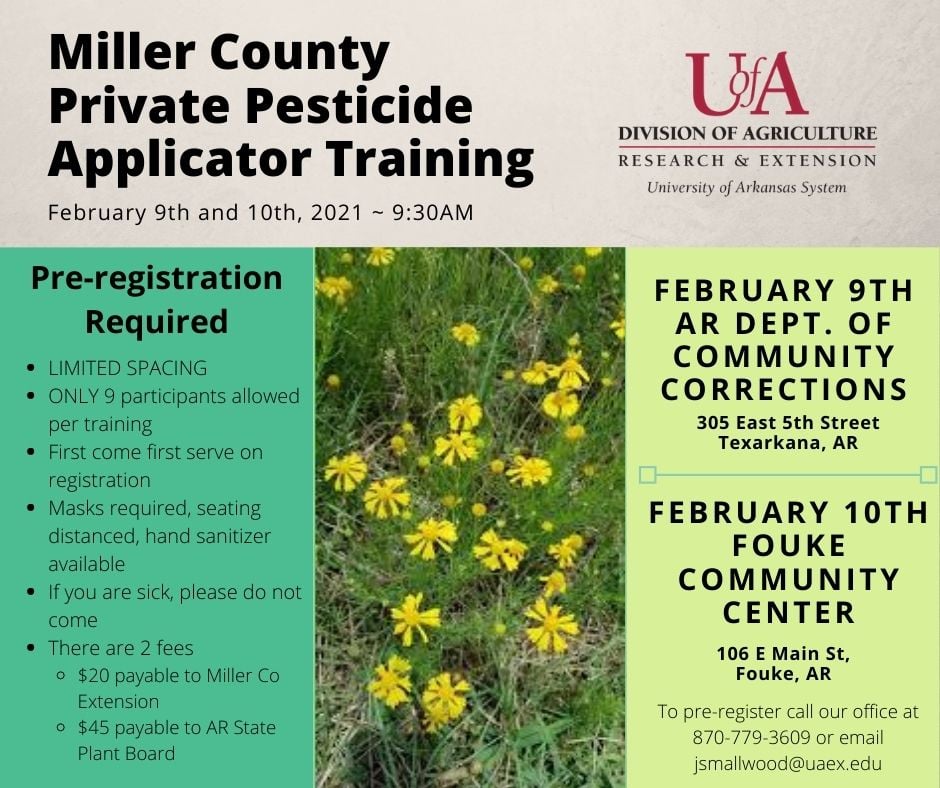 PAT DURING COVID19 -- We will be social distancing and wearing masks during this pesticide applicator training, Tuesday, February 9, 2021, from 9:30 AM-Noon. A second training will be Wednesday, February 10, 2021. Pre-registration is required due to distancing requirements so call to register at 870-779-3609 or email jsmallwood@uada.edu. Cost is $20 for the training + $45 for licensing for the full 5 years. 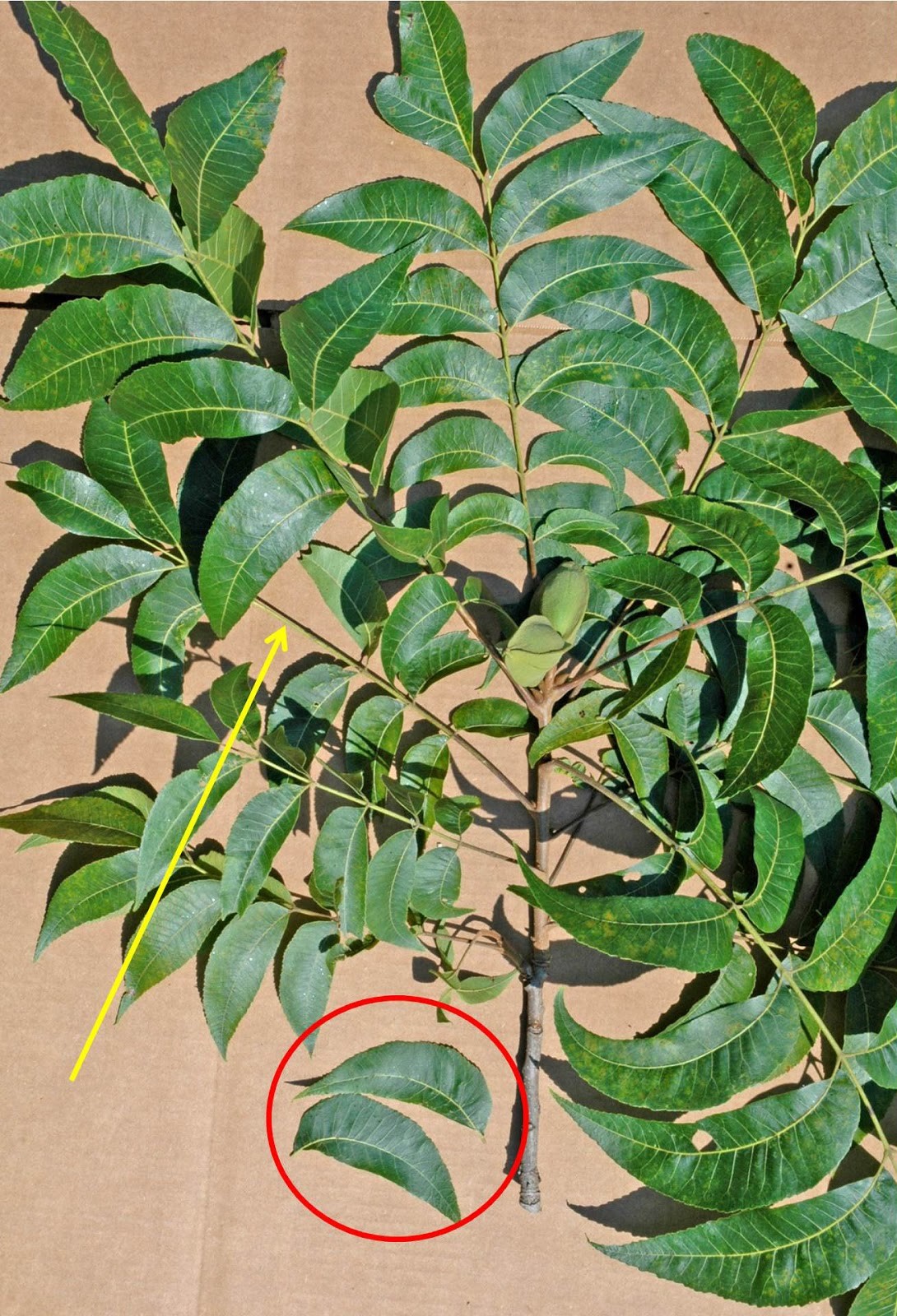 Now is the time to pull plant tissue nutrient samples for pecans. These results are important for growers to determine fertility rates for next year and to identify if any deficiencies may be developing.

See PowerPoint with photos on how to pull the samples. Last year we were able to get over 24 pecan growers to submit samples. These samples help us compare this year's results to see how things have changed.

The time to submit samples is now.

Click HERE for information on how to submit pecan tissue.

The new Arkansas Farm Animal Veterinarian Directory is now available.  This directory is based on a veterinary survey conducted in March. To any veterinarians that did not turn in their survey and would like to be included, please contact Heidi Ward, DVM, PhD, Assistant Professor and Veterinarian with the University of Arkansas System Division of Agriculture (501-671-2162) directly.  Paper copies will be available at the Arkansas Cattlemen's Association Convention at the end of August for producers.

Skunks and bats are the main reservoirs for rabies in our state. We have had two horses positive for rabies this year.  Last year, we had a positive cow. View the map below and click the What is Rabies? to read more about rabies. 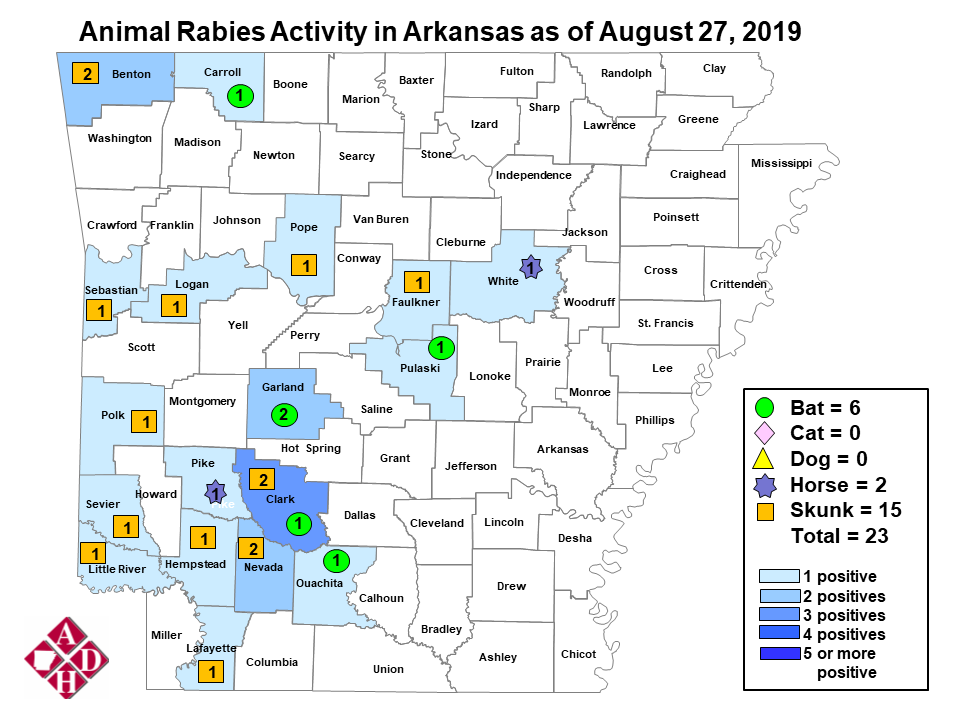 What is Rabies?
Cotton Yield Calculator

From canning to nutrition to food safety, all of these topics, and many more, are addressed through the family and consumer science educational programs. Contact Carla Due, Miller County Staff Chair/Family & Consumer Sciences Agent for more information.

With our social distancing, many will spend time cleaning out their pantries and refrigerators. This research-based chart helps you know the life span of various types of pantry and food items we keep in our kitchens.

Ever wondered how much turkey to buy? How soon do I need to thaw it in the refrigerator? What about my prestuffed frozen bird? All your research based answers are here! 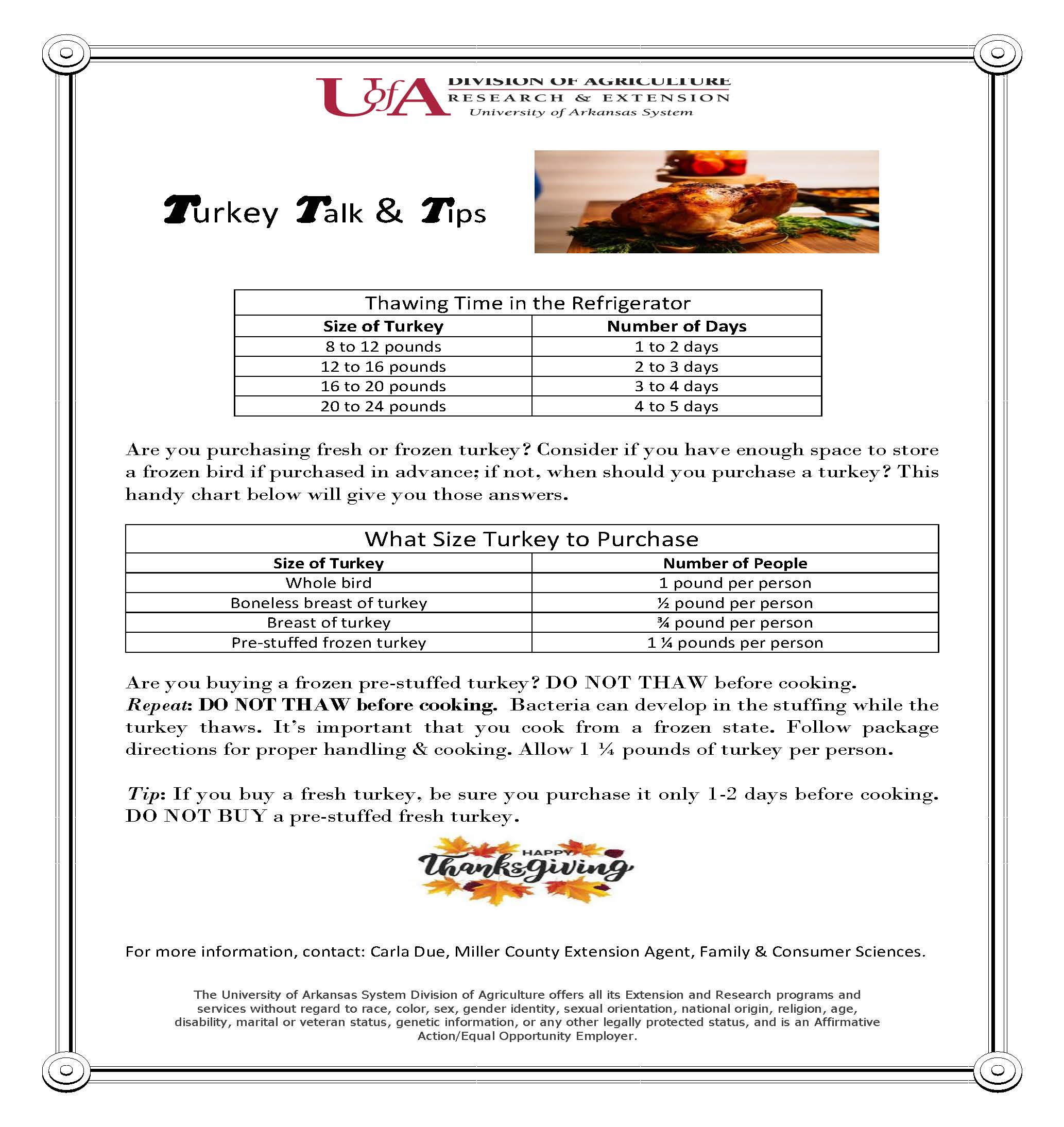 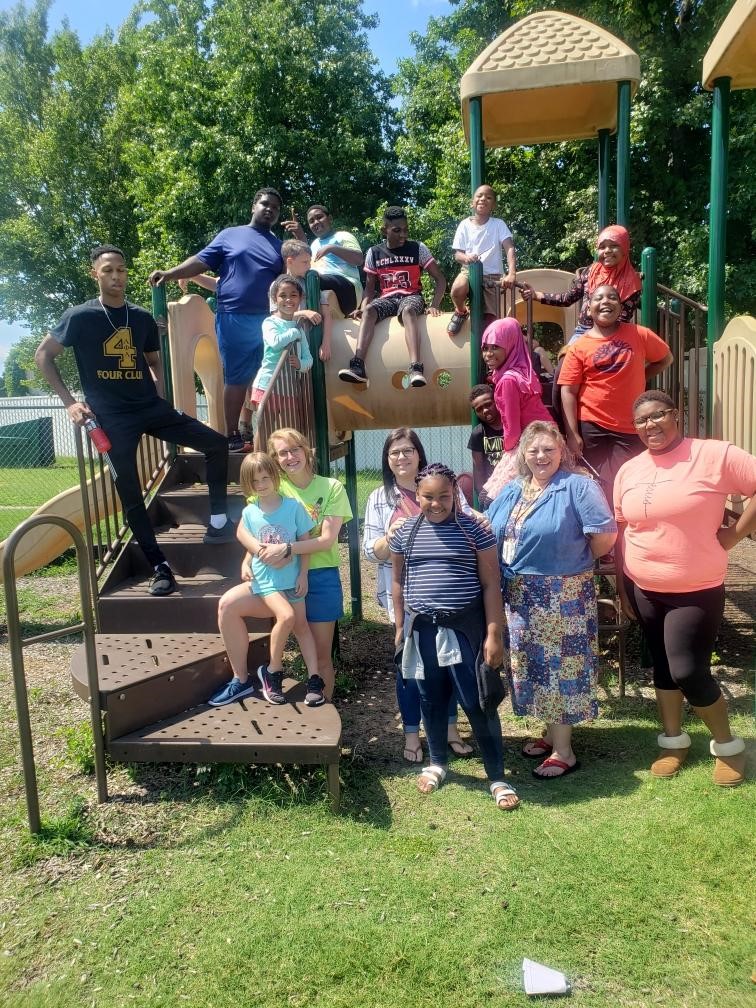 Hempstead County new EFNEP (Expanded Foods & Nutrition Education Program) Program Assistant, Amy McClane shadows Miller County Program Assistant, Casey Battles, while teaching her Kids in the Kitchen Protein lesson and Yoga for Kids. Amy stated, "I learned so much and had a great time. The training collaboration among counties is wonderful. Miller County Extension Office was very welcoming and supportive. My training will soon be complete, and I look forward to applying the newly acquired skills to good use for the benefit of my community members." Learn more about the EFNEP Program by calling 870-779-3609 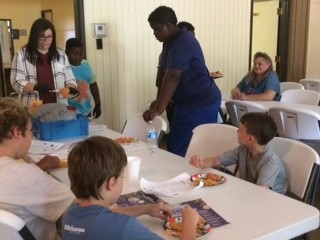 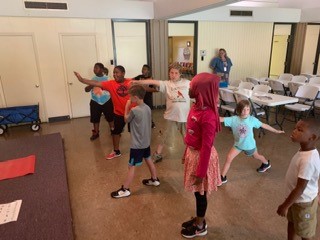 4-H is a fun and educational program where kids "learn by doing." It is a great opportunity for youth to acquire knowledge and skills, and develop healthy lifestyles that will be beneficial for the rest of their lives. In Miller County it takes the form of community clubs, project clubs, and in-school clubs.

Anyone age 9-19 can join 4-H or we have Cloverbud activities for youth ages 5-18. So come join the fun. There are many project areas and we can find one just for you! Be sure to let Hanan know if there is anything you need help with.

The faces of 4-Hers are as diverse as the activities in which they take part. Some of the exciting programs our members are experiencing firsthand include:

New and exciting things are happening in 2021! The Arkansas Cattlemen's Association is sponsoring a Cattlemen's Choice Replacement Heifer Pen Show to be held in conjunction with the 2021 Arkansas State Fair. Click below for information regarding the pen show. It is completely different and separate from the Commercial Heifer show. It is not replacing the Commercial Heifer show, simply a new, additional show.

The 63rd Annual Arkansas Dairy Foods Contest will be Thursday, June 4, 2020 in Little Rock. This annual event is sponsored during June Dairy Month by Arkansas Farm Bureau and the Arkansas Dairy Cooperative Association.

The contest is divided into two categories: Main Dish and Party Ideas. Each county may enter one recipe in each of the two categories.

Students enrolled in 4-H aged 9-19 or in the 4th through 12th grades as of Jan. 01, 2020, and living in Arkansas may enter. Home-schooled students may also enter. Entries must be approved by the county dairy committee or by the county Extension agent.

Each contestant must agree to participate in the state cook-off if his or her recipe is selected for the semifinals.

Rules and Regulations for Dairy Contest 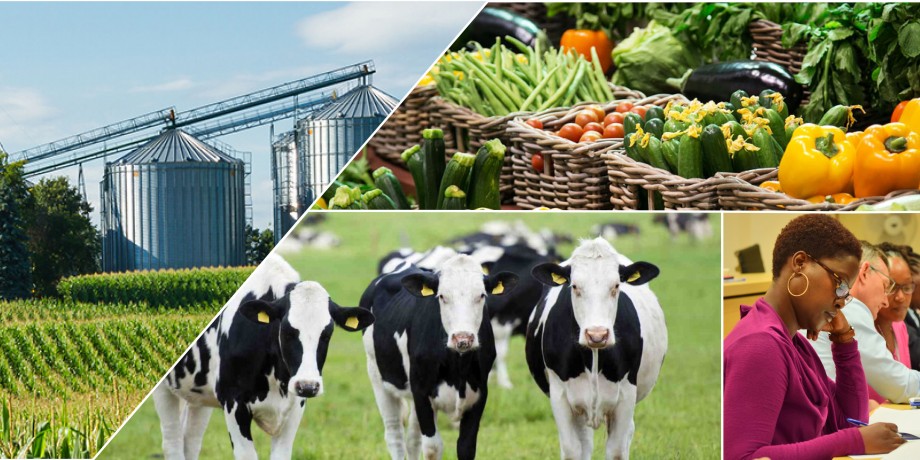 The Miller County Cooperative Extension Office is pleased to announce our 2nd Southwest Arkansas Agri Academy. The Academy is an innovative, week-long youth leadership program for area students interested in learning more about the expansive agricultural industry in the four states area.

The Southwest Arkansas Agri Academy will be held June 1-5, 2020 and will feature tours of area agribusinesses from the various facets of agriculture and natural resources that influence the regional economy. Academy attendees will also work on personal leadership development throughout the week.

The camp is open to students who will be enrolled in high school during the Fall 2019 semester. Students who are interested in attending must fill out an application by Monday, April 15 to be considered. The cost of the camp is $75.00.

Register or find out more by clicking below.

The Scott Foundation 4-H Scholarship is a one-time scholarship available to graduating seniors who are active 4-H members in good standing with Miller County 4-H. Completed applications should be turned in to the county Extension office by 4:30 p.m. on Wednesday, April 1.

April 11 - UA Block and Bridle Cattle for a Cause - AJCA, Fayetteville