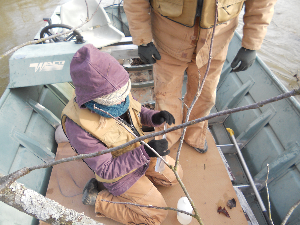 Jennifer and Doug scouting the Sulphur River for buffalo gnats

Every winter Doug Petty, former Miller County Ag Agent, and I scout the Sulfur River multiple times to obtain counts on the amount of buffalo gnat larvae that we see and the potential for an outbreak.

In the past few weeks Doug and I have seen more Buffalo Gnat larvae than we have seen in 5 years of scouting. We took our findings to the local Buffalo Gnat Committee here in Texarkana. The Committee agreed we were at treatment levels and treating the river with a natural insecticide called Bacillus thuringiensus var israelensis (Bti) was deemed necessary. Bti is typically allowed in organic farming as an insecticide because Bti is a natural, non-pathogenic bacterium that is found naturally in the soil. Bti has also been found to be safe to all higher animals tested and is non-toxic to humans.

Unfortunately, due to excessive flooding and waters backed up in Bowie County, the U.S. Corp of Engineers were unable to lower the river. Without the river being lowered, we cannot treat.

Swarms of southern buffalo gnats tend to kill animals in one of several different ways. There can be death due to blood loss — exsanguination. There can be death from a large number of flies blocking the air passageway — essentially, suffocation. But if you look at a lot of the literature, it suggests that most of the deaths will be due to toxemia. Basically, the animal reacting to the saliva, the anticoagulants in the salivary glands of the gnats.

When you have massive attacks from the southern buffalo gnat, the deaths are likely caused by acute toxemia or anaphylactic shock. It’s not a pathogen — it’s just the toxins in the salivary glands.

Humans as well as domestic animals may be viciously attacked. The eyes, ears, nostrils, wrists, and all exposed parts of the body of man are subject to attack. The extreme pain, itching, and the resultant local swellings, together with occasional severe complications, indicate the presence of an active allergin. In some individuals, the face, arms, and other exposed parts may be greatly swollen as a result of the bites; in others, effects other than blood loss may scarcely be noticeable. Livestock and poultry are sometimes killed by large numbers of black flies.

What are Buffalo Gnats?

Black flies are tiny, blood-sucking flies in the insect family Simuliidae and are often called buffalo gnats or turkey gnats. Contrary to their name, black flies may be gray, tan, or even greenish. They breed in fast moving water of streams and rivers. They are tremendous pests of humans, domestic animals, and wildlife every spring.

Darkness/Shelter – Animals may be stabled during the day

Repellents – Fly repellents including permethrin applied to the chest, belly, and ears are somewhat effective

Bring Inside - Bring pets indoors during the day

Fans – Strong air currents are not favored by gnats.

Sprays – Treat under shrubs, trees, and underbrush in evenings while gnats are at rest.

wipe on (picaridin) and others can be used on the skin.

Clothing – Do not wear light blue. Wear layers of light clothing closed at collar and wrists.


The Arkansas Cooperative Extension Service is an equal opportunity/equal access/affirmative action institution. If you require a reasonable accommodation to participate or need materials in another format, please contact your County Extension office (or other appropriate office) as soon as possible. Dial 711 for Arkansas Relay.