Self Sufficient U Blog

Have you seen the predicted temperatures in the South for this week? Ridiculous. Woe unto of any of us working outside in it. We haven’t seen this many days of potentially triple-digit temps in south Arkansas for several years. I’m not ready. The high temps and humidity aren’t safe for us, but did you know they can also cause some changes in our garden?

My first thought when I saw the forecast was, “there goes the tomatoes setting,” and it gave me the idea for this blog. There is more than one reason tomatoes can stop setting fruit. Let’s talk about them.

When day temperatures rise above 95 degrees and night temperatures are upwards of 72 degrees, our larger fruited tomatoes will not set. This is the most common reason tomatoes stop producing. Humidity conditions above 70% can also make pollen too sticky to be moved around by the wind. Since tomatoes are largely self-pollinated, having complete flowers with both male and female parts, wind alone is usually sufficient to shake the pollen to the female parts and cause pollination. We in the South understand that high humidity = sticky.

We don’t like to move when we’re sticky. Neither does pollen.  According to the National Weather Service, the nighttime lows will be 73 degrees or higher from Wednesday through next Monday, with the daytime highs ranging from 96-101 degrees and the humidity will hit higher than 70% most days. That will definitely cause blossom drop.

What can you do to prevent blossom drop?

Keep your plants healthy and watered, and when the temperatures fall back below face-of-the-sun temperatures, your tomatoes should start producing again.

High temperatures can also affect production of some of our peppers, especially bell peppers. The hotter peppers tend to tolerate the hotter temperatures better.  Interestingly enough, smaller tomatoes like cherry tomatoes have a wider range of temperatures in which they will continue to produce, so you probably won’t see a break in production with them.

As a side note, temperatures below 55 degrees will also cause blossom drop, but that is not the situation we are facing this week. That’s a problem for tomatoes that are planted early in the spring. 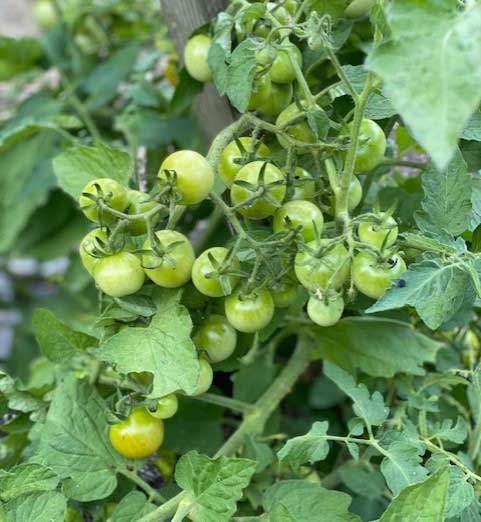 Nearly every year, I get at least one call from someone describing their tomato plants as the most big and beautiful they’ve ever had, but they don’t have any tomatoes on them. My first question is, “How much have your fertilized?” Over-fertilization can be just as bad as under-fertilization. With these cases, too much nitrogen fertilizer causes excessive vegetative growth which inhibits the plant from entering reproductive mode, reducing the number of flowers formed.

How can you prevent issues with nitrogen?

We always recommend a soil test every 3 years to see exactly where your soil is and how to fertilize. You will want to fertilize before you plant and then not again until the first fruit sets. After that you can sidedress with 1.5 tablespoons of a complete fertilizer (10-20-20, 13-13-13, etc.), worked into the soil every 2 weeks. Sandy soils will need to be fertilized more frequently than heavier clay soils.

I would say we haven’t had a dry summer in Clark County for at least 5 years. It may have gotten a little dry in August a few times, but overall, it’s has been oddly rainy here in the summers lately. This last week and looking at the forecast makes me think that this year may be different. It’s gotten dry in the garden pretty quick. Dry soils stress our vegetables and can cause blossom drop.

How can we prevent dry garden soil?

Keep your garden irrigated with at least 1 inch of water per week. During periods of extremely hot weather, more water may be needed. Try to irrigate at the soil level with either drip irrigation or soaker hoses. If you have sprinklers, use them first thing in the morning to allow the leaves time to dry out before nighttime to reduce disease pressure.

If you garden in containers or raised beds, you will definitely need to water more than once a week during dry spells. Stick your finger and inch or two into the soil, and if it is dry, irrigate. Avoid letting the plants start to wilt.

Tomatoes are one of the most popular things to grow in the garden. Sometimes they don’t produce like we would like. High temperatures are the most common reason this time of year, and we can’t do anything about that but keep them healthy until the temperatures cool back down. Other reasons like over-fertilization and dry soils can be prevented, and as long as we’re vigilant, we should be able to keep our tomatoes producing for most of the summer.

UADA has lots of information on growing tomatoes successfully check out the Growing Tomatoes in Arkansas page and our Tomato Home Gardening Series Fact Sheet.