Into the night: Shedding light on nocturnal pollinatorse
skip to main content
News - 2021

Into the night: Shedding light on nocturnal pollinators

FAYETTEVILLE, Ark. — For millions of years, there has been a night shift at work pollinating flowering plants and fruit trees. But only recently have they started to get a little credit for their contributions to agriculture. 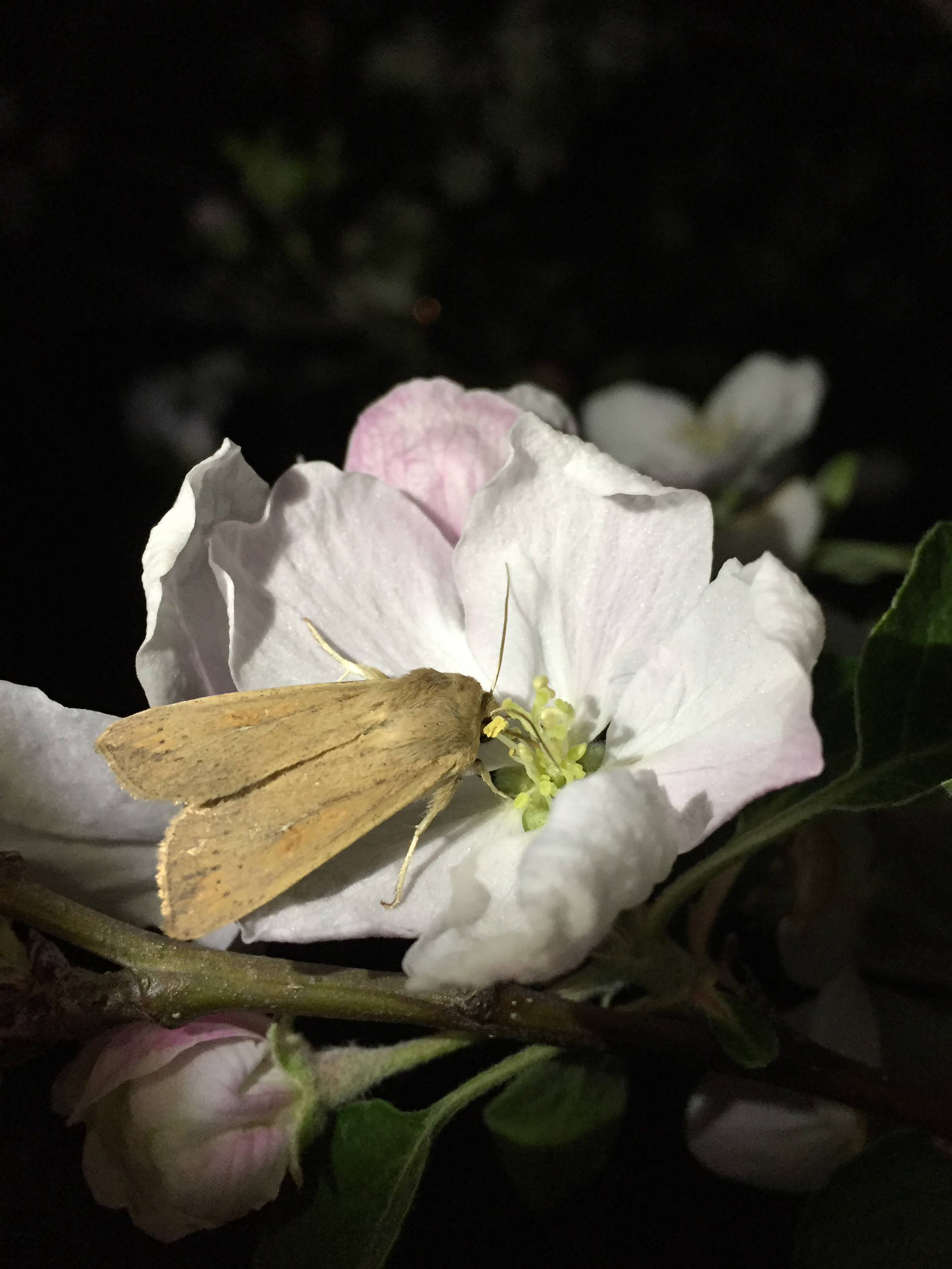 NIGHT SHIFT — Mythimna unipuncta, also known as the armyworm moth, does as much pollination at night time as bees during the day. (Photo courtesy of Dr. Stephen Robertson)

Moths may not provide a sweet treat like their daytime counterparts, the honeybees, but pollination research on apples conducted by Arkansas Agricultural Experiment Station researchers shows nocturnal pollinators are equally as important to nature’s system with flowering plants.

Highlighted in July by the Journal of Economic Entomology and the Entomological Society of America, the three-year study led by Stephen Robertson, former University of Arkansas graduate assistant in the department of entomology and plant pathology, found nocturnal pollinators like moths are just as capable of pollinating apple trees at night as are bees during the day.

“They are the unsung heroes of pollination,” Robertson said. “If you look at the diversity and the sheer numbers of moths out there, the other pollinators pale in comparison. So, you’re talking about a massive group of animals that probably contribute not just to fruit crops or crops in general … but to pollination overall they may just be the most important pollinators as a group.”

The night shift could be at work on many other food crops as well, he said. Robertson’s study is among the first to examine nocturnal pollination in agriculture and the first recorded study on night pollinators for apples. Robertson said apples were chosen because they are one of the top three food crops in the United States.

The entomologist noted in his dissertation that the world’s food growers are shifting to more food crops that require pollination, including soybeans. His study sheds valuable light on the night flyers as being more beneficial to production stability than previously recognized.

Ashley Dowling, professor of entomology for the Arkansas Agricultural Experiment Station, which is the research arm of the University of Arkansas System Division of Agriculture, said the night pollinator study is important because it shows how much is really going on behind the veil of night. It could also help save declining numbers of night pollinators, much like efforts are being made to save honeybees, “a non-native insect in the U.S.” that has become the predominant pollinator in agriculture, Dowling added.

“As a reaction to the loss of honeybees across the country, strategies to ‘help’ the honeybees have been implemented, such as using pesticides on certain crops in the evenings when honeybees are not visiting flowers,” Dowling wrote. “This may protect the honeybees, but now it is the night pollinators coming into direct contact with pesticides.”

Dowling concludes that more research on nocturnal pollinators is needed to determine which crops most benefit from night pollination “so management practices can be implemented based upon pollination science rather than an all-out effort to save honeybees.”

Robertson’s suggestion to farmers is to follow Integrated Pest Management practices that consider an economic threshold on the use of insecticides.

Project partners in the apple nocturnal pollinator study included Neelendra Joshi, associate professor of entomology for the experiment station, and Erica Westerman, assistant professor in the U of A’s department of biological research. Robertson and his colleagues showed that nocturnal pollinators, particularly moths, could handle the load of pollinating apple trees just as well as daytime pollinators like bees.

Right place at the right time

In the spring of 2016 when Robertson was working on a study to make insect traps more efficient, he made an important observation.

“I started to catch more moths during the period of fruit bloom and thought ‘OK this is weird,’” Robertson said.

He started to examine things more closely at night. He checked out blueberries and blackberries where moths also congregated. Being in the right place at the right time to make an enlightened observation can be everything in a scientific project, Robertson said about how he “stumbled onto it.”

Then a friend told him of a peach tree at a Fayetteville wildlife refuge attracting moths. The presence of thousands of moths on the peach tree gave him the idea to look further into the night movements of nocturnal pollinators.

“It was a cool moment, and when I talk about it, it’s hard to convey, but if you saw the tree itself covered in moths and … then you see it, and you’re like ‘How has this been not studied? How has this been left out?’”

Evidence that moths are not given much credit as pollinators can be seen in a June 2021 U.S. Environmental Protection Agency website posting with the headline “Pollinator Health Concerns.” Of all the pollinators mentioned by the EPA — from wild bees and ants to wasps, lizards, birds, bats, and butterflies — moths are excluded.

Robertson points out in his study that there have been several mentions of the importance of nocturnal moths as pollinators in scientific literature since the mid-1980s, but the overall lack of studies on their impact on crop production has generated a bias in understanding.

Robertson credits a study led by Romina Rader at the University of New England as a backup. Rader and her fellow researchers found that non-bee insects positively contribute to crop pollination. The Rader study published in January 2016 showed that non-bee pollinator services equaled those provided by bees. Although the non-bees were less effective than bees on per-flower visits, they made more visits to compensate. Non-bee pollinators mentioned by Rader included “flies, beetles, moths, butterflies, wasps, ants, birds and bats, among others.”

On closer inspection, the attributes of moths as pollinators start to add up. One of the pivotal moments for Robertson came in 2019 with the release of a study led by Akito Kawahara at the University of Florida showing the tight co-evolution of moths and angiosperms, or flowering plants.

“I’d already thought maybe there’s something else going on here but once that paper came out it solidified it for me,” Robertson said of the Kawahara study. “The relationship is tight. It’s been around for millions of years. We’re talking hundreds of millions of years, so it’s extremely important.”

Moths are highly specialized insects for pollination. Some nocturnal moths even have a specific relationship with some plants that depend on them for reproduction. Robertson said the classic example of this is between Darwin’s star orchid and the hawkmoth. Other plants are attractive to daytime pollinators, but receive the best inputs from nocturnal moths, he adds.

Adding to their value as pollinators, moths migrate, and their hairy bodies can carry pollen up to 1,000 miles, about the distance from Florida to New York City. This aids in gene flow for angiosperms, Robertson noted. Meanwhile, bees usually stick to a 6-mile radius.

Robertson said more studies are needed on nocturnal pollinators to get a better grasp of their abilities. The research he would like to see done includes investigating moth behaviors on all fruit crops.

“It’s a wide-open door,” Robertson said. “Because of the impact of apples, I think this kicks the door wide open. I suspect everything that has been done on diurnal pollinators can be done with nocturnal pollinators, so we’re talking a massive branch of unstudied, unsung heroes.”

A small amount of research had been conducted on night pollinators before this, but not on a major food crop plant like apples. Previous studies Robertson noted were on cloudberry, a relative of blackberry and raspberry, and lowbush blueberry. Neither are typically found at your local grocery store. Nocturnal pollination studies have also been done on a plant grown for biofuel, Jatropha curcas, and Aquilaria crassna, which is grown for fragrant resins. Others included those on four gourd and cucumber species in Asia, Robertson said.