LITTLE ROCK — Whenever you think you’ve seen it all, you can always rely on Mother Nature to remind you: You’re not even close. Especially in Arkansas, which hosts not only its own native oddities, but is increasingly visited by strangeness from afar. 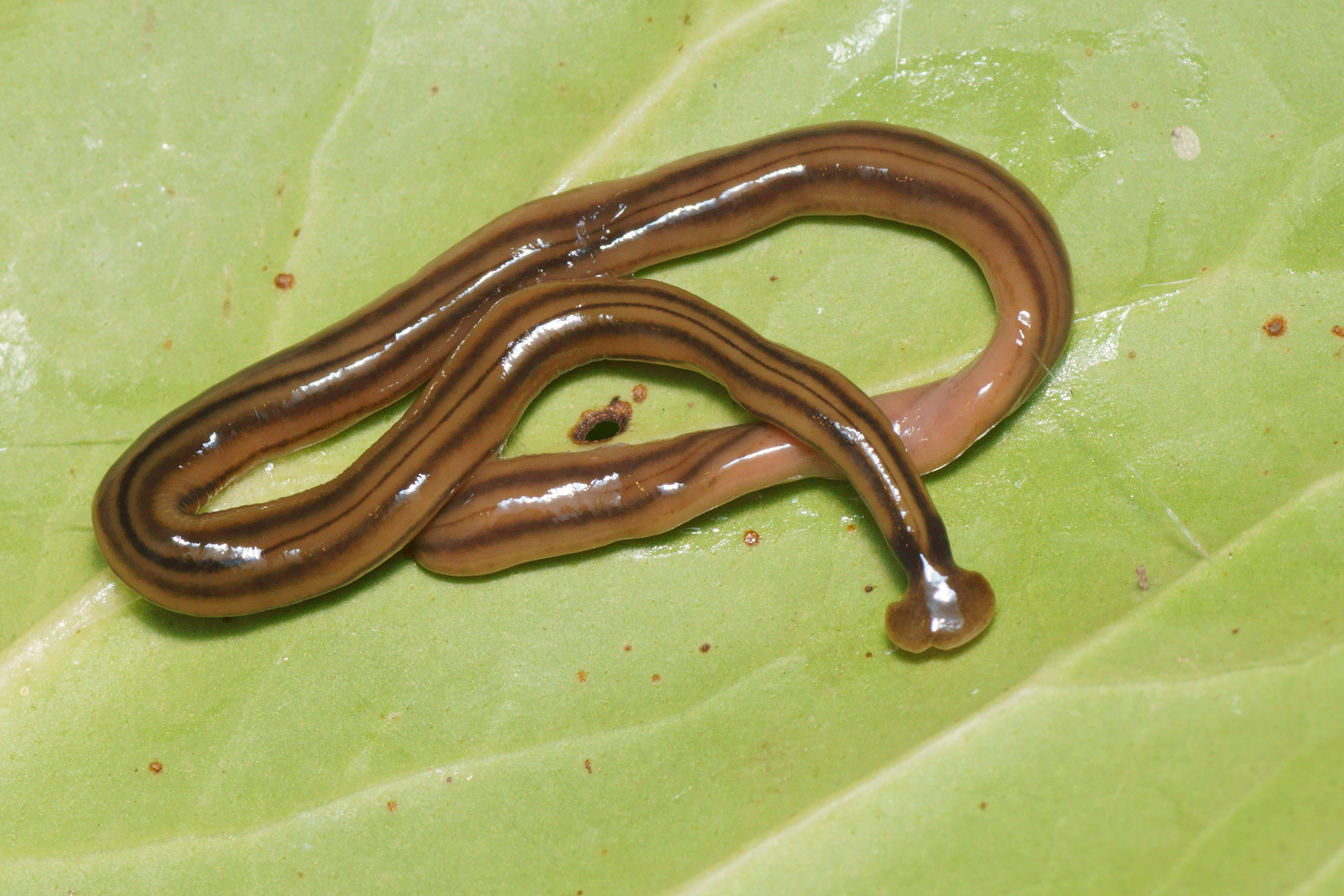 IN THE GARDEN — Hammerhead worms, an invasive species of terrestrial flatworms, have been confirmed in at least 10 counties in Arkansas. While gardeners who discover them should not hesitate to kill them, experts with the Division of Agriculture caution against cutting them with a trowel — the worms can reproduce by fragmentation, and this will only double your problems. (Image courtesy Jean-Lou Justine​, Leigh Winsor, Delphine Gey, Pierre Gros, and Jessica Thévenot.)

This brings us to hammerhead worms — a complex of species in several genera known as planarians, or terrestrial flatworms. Though native to tropical and subtropical Southeast Asia, hammerhead worms have become invasive worldwide, and have been reported in Arkansas for at least a decade.

Jon Zawislak, extension apiarist for the University of Arkansas System Division of Agriculture, said hammerhead worms tend to prefer climates like those found in Arkansas.

“The worms are thought to have been accidentally transported in soil through the global horticultural trade,” Zawislak said. “These flatworms prefer warm climates and feel right at home in the southeastern United States.”

Because they require moist conditions, the worms are uncommon in the drier western deserts and mountain regions but can thrive in greenhouses anywhere that maintain the right conditions, Zawislak added.

Multiple species have been introduced into North America since at least 1901, but data on their distribution is spotty in many places. One species, known as Bipalium kewense, or the Shovel‐Headed Garden Worm, has been observed in 10 different counties in Arkansas. Several similar‐looking species have also been found in neighboring states, including Bipalium adventitium, B. pennsylvanicum, Bipalium vagum and Diversibipalium multilineatum.

Reports of these invasive worms to country agents have become increasingly more common in the last year.

“Gardeners have become aware of these worms because of photos and stories on social media and are now more alert and concerned about their presence here,” Zawislak said.

So the questions become: What do these non‐native worms do? And what should homeowners do about them?

The most visually distinctive characteristic of these worms is their broad, spade‐shaped head. Bipalium kewense has a long flattened body that typically grows to eight to 12 inches, and sometimes even longer. They are light-colored, with one to five dark, thin dorsal stripes. These worms are carnivorous and will prey on insect larvae, slugs, snails, and various earthworm species.

Hammerhead worms are also known to cannibalize each other. They can store food reserves in their bodies and survive several weeks without eating.

Many species of hammerhead worms contain a potent neurotoxin called tetrodotoxin, which they use to immobilize their prey and defend against predators. This is the same toxin found in pufferfish and a few other animals. When they secrete this substance, it can irritate your skin if handled, and will sicken pets if eaten. As a precaution, gardeners should never handle these worms without gloves.

While generally found in warmer climates, hammerhead worms can survive cold conditions by seeking shelter. They tend to avoid the light and are typically be found resting in cool, damp locations during the day, while they prefer to move and feed at night. They may be spotted under rocks, logs or thick vegetation.

Hammerhead worms are hermaphrodites and can mate with any member of their species, but more often reproduce asexually by fragmentation.

“Like many other planarians, if cut into pieces, these creatures can regenerate each part into a whole fully‐developed worm within a couple of weeks,” Zawislak said. “If injured, they can quickly regenerate damaged tissue. These worms regularly break off pieces of their tails as they move along, leaving a bit behind to become a new worm. This ability likely contributes to their success in colonizing new habitats.”

On the home front

Hammerhead worms are considered highly invasive, Zawislak said, and a potential threat to local earthworm populations, as well as gastropods such as slugs and snails.

“Many earthworms have been introduced to North America from Europe and other places, and are beneficial to our gardens and lawns because they aerate the soil, decompose and recycle nutrients, serve as food for birds and other animals and are handy fish bait,” Zawislak said. “But these earthworms have been present here for so long, they have integrated into our ecology, and may disrupt its balance if they are removed now.”

Because of their cryptic habits, ability to reproduce by fragmenting and their lack of natural enemies in North America, hammerhead worms will likely prove impossible to control.

“They disperse slowly on their own but are probably spread by people more rapidly than we are aware,” Zawislak said. “Worms can be transported with potted plant nursery stock, in truckloads of topsoil or by construction earthmoving equipment. There’s no economically feasible method to monitor, control or eradicate these invasive worms.

“Hammerhead worms do have the potential to upset the ecosystem by preying on beneficial worms as well as slugs and snails,” he said. “But since they are also cannibalistic, they may prove to be their own worst enemies.”

Hand-to-hand: What to do if you find one.

Zawislak said that if a gardener spots a hammerhead worm, he or she shouldn’t hesitate to kill it.

“But you don’t want to chop it in half with your garden trowel,” he said. “Using gloves, place it into a plastic bag or other container with salt and vinegar, then freeze it overnight before disposing of it.”

Arkansans can report any suspected invasive species to the Arkansas Department of Agriculture's Cooperative Agriculture Pest Survey office at https://www.agriculture.arkansas.gov/plant-industries/regulatory-section/ag-pest-survey-program/.

Zawislak said that while researchers are aware that hammerhead worms are present in Arkansas, residents have yet to record many sightings. https://www.inaturalist.org/ is a citizen science project attempting to catalog all living things. Arkansans can upload observations and be among the first to help track the spread of this invasive worm.

To see their current known distribution, or to learn more, visit https://www.inaturalist.org/taxa/64221-Bipalium-kewense. Visitors to the site can also look up any other known plant, animal, bird, fish, insect or fungi.