LITTLE ROCK — Despite a year featuring record flooding events, heavy insect pressure and a near brush with a recent hurricane, Arkansas rice is moving toward a harvest that may see near-record yields on par with the last several years. 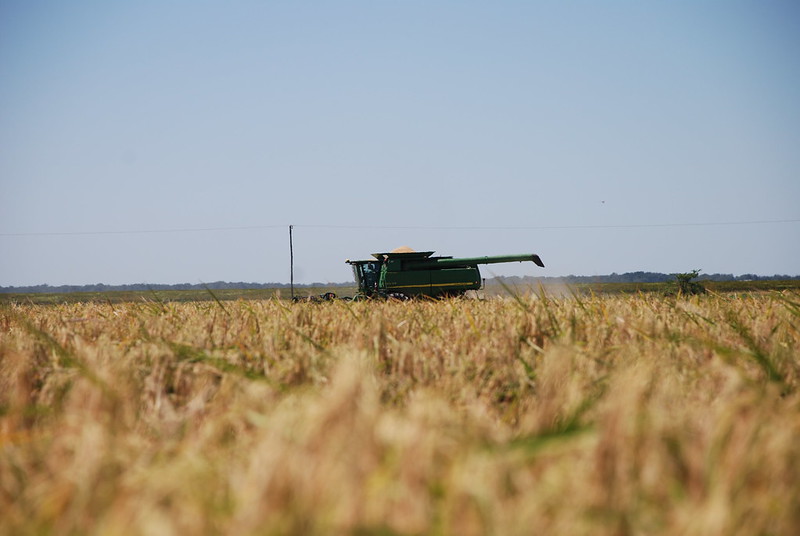 ONE STEP AT A TIME — Despite a year featuring record flooding events, heavy insect pressure and a near brush with a recent hurricane, Arkansas rice is moving toward a harvest that may see near-record yields on par with the last several years. (Division of Agriculture photo.)

Jarrod Hardke, extension rice agronomist for the University of Arkansas System Division of Agriculture, said the general level of expectation is high among experts watching the 2021 crop.

“Once we got into the full swing of summer, the crop really seemed to come together,” Hardke said.

“Average yields for the past four consecutive years have been very high — not records, but very close to the record set in 2013 and tied in 2014,” he said. “This year’s crop looks as though it’s going to be in that ballpark of the last several years.”

“Despite some of the battles we’ve fought, we’re expecting a very good crop,” he said.

Flooding
The most notable flooding event in the state this year has been the record rainfall in southeastern Arkansas in early June, during which the Rohwer outpost of the Arkansas Agricultural Experiment Station — the research arm of the Division of Agriculture — recorded nearly 20 inches of rainfall in 48 hours. Other areas in eastern and southeastern Arkansas received up to 16 inches of rainfall from the same event.

While the event was devastating for growers in the area, most rice growers throughout the state suffered relatively little damage from the event, Hardke said. He estimated that about 30,000 acres of rice had been lost to the event, out of about 1.24 million rice acres planted in Arkansas this year.

Pests
Arkansas rice growers faced unusually high populations of both fall armyworms — which also bedeviled pastures, soybean and grain sorghum fields — and stink bugs. Entomologists with the Division of Agriculture sought and received emergency-use exemptions from the Arkansas State Plant Board and the U.S. Environmental Protection Agency for specific pesticide applications to battle the infestations in July and August.

Hardke said there will likely be some degree of impact on overall yield from the fall armyworms, although it’s impossible to accurately predict the degree of that impact at this point. He said the planting date of any given acre will figure critically into how it will have been affected.

“The armyworm infestation was very widespread,” Hardke said. “Once we were able to get the crisis exemption, giving us an effective product to use against armyworms, our situation improved. But there’s absolutely going to be some yield impact from the defoliation that was occurring.”

Hardke said growers saw much more persistent pest pressure from stinkbugs in 2021 than in previous years, but that the impact from that pest will be felt less in the overall yield than in the quality of the rice.

“Stinkbugs may or may not mean lower yield, but it will likely mean higher peck damage to the rice,” he said. “If that exceeds a certain level, it can become a major economic hit for growers and the industry.”

Ida
Until last year, the idea of an actual, meteorologically defined tropical storm passing through Arkansas seemed far-fetched. But then, there was the year that was 2020. In late August, Tropical Storm Laura brought 40 mph winds and heavy rains through the state, flattening soybeans, rice and other crops that were approaching harvest.

Meteorologists, growers and many others anticipated similar severe wind and rain damage from Ida, which escalated from a tropical storm to a category 4 hurricane before making landfall in Louisiana on Aug. 29.

While the storm did cause severe damage and dozens of fatalities in Louisiana as well on the northeastern seaboard, Arkansas saw virtually no impacts.

“In the parts of the state with the highest concentration of rice acres, we saw essentially nothing, unless you happened to catch a pop-up shower,” Hardke said. “It just didn’t really amount to much.

“There are soybeans out there still being irrigated, and those guys certainly would’ve been content to get a couple of inches of rain, and maybe knock out a round of irrigation,” he said.

If anything, Ida may have benefited Arkansas rice growers in a way, breaking the cycle of high heat and oppressive humidity, Hardke said.

“A lot of rice that was mature but not quite finished out to the point that we can really proceed with harvest,” he said. “We’ve still got nice, warm days, but a lower dew point will help finish out the maturity.

“The extended forecast of warm temperatures and dry air is a huge positive at the moment,” he said. “We may see a pretty big lurch forward with the harvest.”