LONOKE COUNTY, Ark. — Arkansas growers have seen a little — or a lot — of everything this year, including record low temperatures and snowfall in February and a record rainfall event in June. Nevertheless, many row crop farmers in the center of the state are enjoying a strong harvest season. 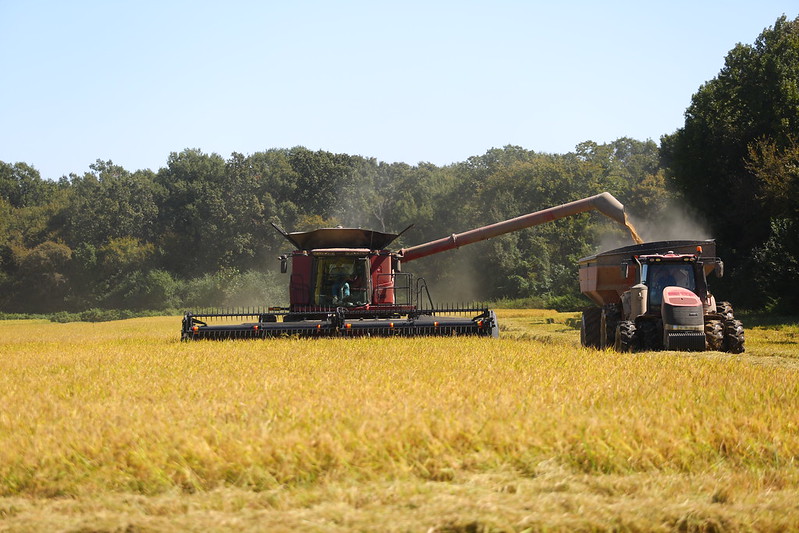 FIELDS OF GOLD — Arkansas growers have seen a little — or a lot — of everything this year, including record low temperatures and snowfall in February and a record rainfall event in June. Nevertheless, many row crop farmers in the center of the state are enjoying a strong harvest season. (Division of Agriculture photo.)

With 100 percent of the state’s rice matured, and upwards of 90 percent harvested as of this week, Keith Perkins, Lonoke County agricultural extension agent for the University of Arkansas System Division of Agriculture, said the last of the summer’s heat had provided a relatively easy transition into fall.

“We had a challenging season,” Perkins said. “It was a hard time getting the crop planted. We ended up having to plant some late rice, late beans. But we’ve had a good harvest season — we’ve been relatively dry this whole time.”

Central Arkansas growers may have avoided the worst of the state’s wild weather, but other pressures were certainly brought to bear, including the same insect pressure — fall armyworms in particular — that bedeviled much of the state.

“Our biggest challenge was the number of times we sprayed cotton for bugs,” Fletcher said. “It was about once a week for four to five weeks.”

In addition to cotton, Fletcher also farms corn, soybeans, wheat and rice, the last of which he planted entirely in irrigated rows, a gradually increasing trend throughout Arkansas.

“This year, we did all row rice,” Fletcher said. “The yields were exceptional, and the ease of harvest without levies was exceptional. We will absolutely continue to do it this way.

“Unless something changes, there won’t be another levee on this farm,” he said.

Row rice does incur some additional input costs in fertilizer and herbicide, Fletcher said. But he found that those costs are more than offset by the reduction in time and labor typically associated with shaping fields to support the levees and drainage used for flood-controlled rice production.

Little early planting
Jarrod Hardke, extension rice agronomist for the Division of Agriculture, said that relatively few rice acres were planted early this year, and that periodic rains through much of the spring meant that overall planting progress was a battle of patience.

“The 2021 season was a year once again characterized by making planting progress in small windows between rains,” Hardke said. “The large flooding event in early June wreaked havoc on all crops — even rice — particularly in the southeast and Grand Prairie regions.

“We lost rice acres and where rice survived, we still had tremendous levee damage to repair,” he said. “The middle of the season turned less eventful and was rather smooth except for some higher-than-preferred nighttime temps.”

Hardke said that despite these setbacks, Arkansas still enjoys the potential for a state yield record, which growers have been within a bushel of for several consecutive years. Milling yields, however, have been below average, he said, cutting into growers’ profits on those yields.

The high heat did increase reliance on irrigation for many central Arkansas growers. Clay Parker, a graduate from the University of Arkansas who is now in his second full year of post-collegiate farming on his family’s property, said making it through the worst of the summer heat was one of his biggest challenges this year.

“We had some times that it got real dry over the summer,” Parker said. “We had to do a whole lot of watering really fast, just because things were getting scalded. But overall, we’ve had a really good year so far.”

Off-farm challenges
Parker said that beyond weather and pest pressure, his biggest challenges were related to material and labor shortages, as the pace of international shipping and electronics and parts production — much of it correlated to bottlenecks caused by the ongoing  COVID-19 pandemic — led to occasional slow-downs on his operation as he waited for tractor parts to arrive.

“We’ve got several combines, but it seems like we’ve had only one running as often as we’ve had all three running,” Parker said. “That’s been a frustration, but that’s just part of it. A lot of that is just waiting on parts, which I know is something everyone’s having to deal with this year.”

Parker also faces another question common to farming above a certain scale, deciding at what point to bring on additional labor.

“We’ve got good guys to run equipment, but sometimes we just get stretched too thin,” he said. “And nobody wants to do the grunt work. I’m not saying I shouldn’t have to, it’s just not always efficient for me to be doing it.  We’ve got to have skilled labor.”