LITTLE ROCK — This year’s 4-H Biggest Pumpkin and Watermelon Contest entries were a little on the lighter side but still managed to survive a growing season beset with rain, flooding and even drought. 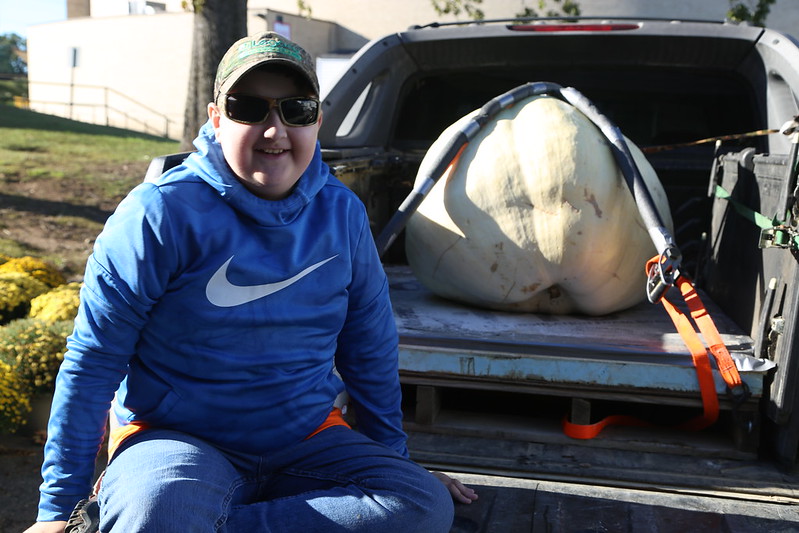 RETURNING CHAMPION — Twelve-year-old Mark "Buster" Passmore of Greene County waits for a forklift to hoist his pumpkin onto a scale at the 4-H Giant Pumpkin Contest on Oct. 16. Buster won first place — his third win at the state level. (Division of Agriculture photo.)

This was Passmore’s third win at the state level. In 2019, he delivered a 491-pound pumpkin, and last year he won with a 334-pound pumpkin.

4-H members contended with rain and flooding that delayed their planting, which cut short the growing time for their pumpkins and watermelons. Others lost plants to mildew and blossom rot. Those, whose plants survived the tough summer, hauled their choice picks to the Arkansas State Fair on Oct. 16 for the official weigh-in.

For the contest, participants grew the same varieties: Carolina Cross watermelons and Atlantic Giant pumpkins. Pumpkins had to be planted between May 14 and Oct. 16 Watermelons were planted May 14-Oct. 16. Passmore said he was more than two weeks late planting his pumpkin due to weather.

“I didn’t think I was going to have a pumpkin this year,” he said.

Pumpkins thrive in consistent growing conditions, and this year’s growing season was anything but consistent.

“If you get a little rot in the stem or on the belly, the pumpkin is done unless you have a second one on the vine,” Greene County extension agent Dave Freeze said. “Most growers, though, pulled smaller fruits off the vine to allow their choice pick to get all the nutrients.”

“They certainly had a lot of challenges this year, but that is part of learning about horticulture,” said Priscella Thomas-Scott, 4-H events coordinator for the University of Arkansas System Division of Agriculture. “We’re proud of all of them who persisted and learned.”