After a strong start to peanut harvest, rainfall taps brakes

LITTLE ROCK — In a year of stops and starts, the Arkansas peanut harvest is not immune. 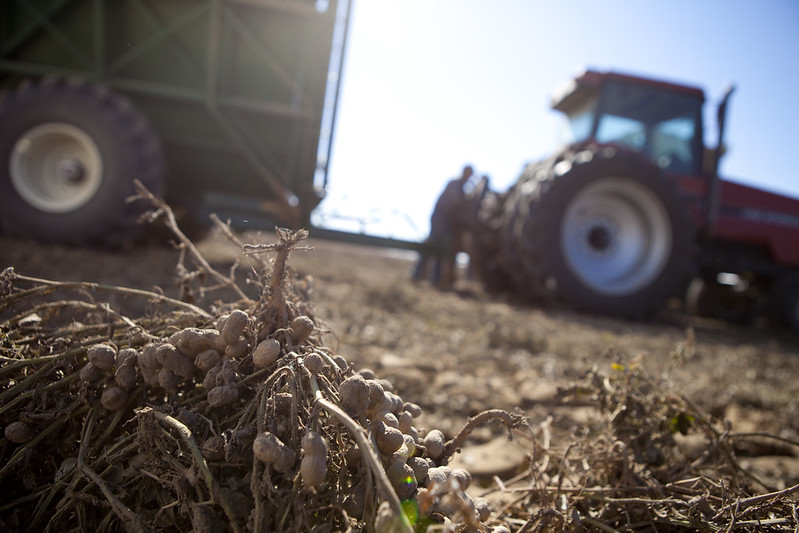 HALFWAY THERE — Growers reported that nearly half of Arkansas' peanuts — about 40,000 acres' worth — had been dug from the ground as of last week. The remainder of the harvest process may be slowed by rain, however. (Division of Agriculture photo.)

The harvesting process for peanuts is, at a minimum, a two-step process — the legumes must first be unearthed, then allowed to dry above ground before being harvested. According to the U.S. Department of Agriculture’s National Agricultural Statistics Service, about 45 percent of the state’s planted peanuts had been dug as of Oct. 3. About 15 percent of the total crop had been harvested. Both numbers put the 2021 crop’s progress in line with the five-year average.

Andy Vangilder, agriculture and natural resources extension educator for the University of Arkansas System Division of Agriculture, said that the actual progress of any given farmer is hit-or-miss, depending on how much rainfall he or she saw this past weekend.

“We’ve got some peanuts harvested, but we’ve also come to a screeching halt, because many areas got three to four inches of rain over the weekend, and some scattered showers throughout this week,” Vangilder said. “Obviously, when it’s muddy, we can’t dig — the soil needs to dry out before we can dig again.

“Nobody’s ready to make a prediction on yield yet, but everyone I’ve talked to said things are looking pretty good for them,” he said.

Vangilder said peanuts are vulnerable to weather conditions in the period between digging and harvesting, when they are completely exposed to the elements.

Conditions in Craighead County, one of the state’s larger peanut-producing counties, seemed to stand in for much of Arkansas’ Delta region.

“(It’s) still early in the harvest to get a feel for yield potential,” Chris Grimes, Craighead County extension agricultural agent, said. “Several acres have been dug and they were just getting into harvest when the rain event shut them down.”

Like most of the state’s crops, peanuts were late into the ground this year, due to extended spring rains and cool temperatures. But the summer growing season went well, with very little disease pressure on the crop overall. Even armyworms, which attacked several Arkansas row crops in massive numbers this year, left peanuts relatively unscathed.

Although a USDA report in late June pegged Arkansas peanut acreage at about 40,000 acres, a slight increase over 2020’s 39,000 planted peanut acres, Vangilder said acreage is actually down slightly in the final analysis, as commodity prices for other row crops have rallied. And while the establishment of additional buying points and shelling facilities in northeastern Arkansas and southeastern Missouri may ostensibly make peanut production more attractive, it’s unclear if such facilities will induce growers to shift more acreage toward peanuts.

“Peanuts still offer the same benefits as a rotation crop, and all that,” Vangilder said. “The thing we’re seeing right now is that commodity prices in all the other crops are up — good prices on corn, soybeans and so on. So these past few years, peanuts had been one of the most profitable crops there was, and you can grow them on ground that’s normally less productive.

“If those other commodity prices remain high, I just don’t know if we’re going to see that many more people get into peanuts,” he said. “But nobody knows what’s going to happen.”