May’s dark parade of rain has provided frustration aplenty for Arkansas farmers trying to get a crop in the ground, however, “this past week could’ve been much worse,” said Jarrod Hardke, extension rice agronomist for the University of Arkansas System Division of Agriculture.

CONWAY, Ark. — May’s dark parade of rain has provided frustration aplenty for Arkansas farmers trying to get a crop in the ground, however, “this past week could’ve been much worse,” said Jarrod Hardke, extension rice agronomist for the University of Arkansas System Division of Agriculture.

“The rain we received back on Tuesday (May 11), combined with the then forecast for this past weekend and this week, looked dire,” he said Monday. “However, Tuesday’s rain event was not as heavy as thought, and it brought a constant north wind that dried up areas that haven’t been dry since early last fall. 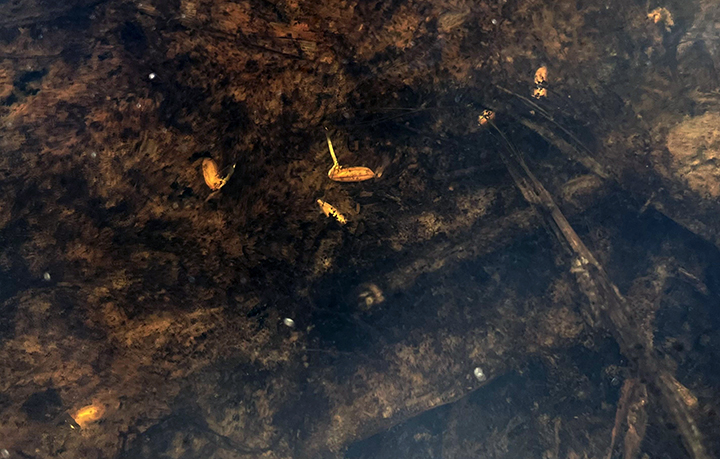 GERMINATION — A rice grain germinates under water in Faulkner County. Image taken May 10, 2021. Planting plans have had to change thanks to a rain-laden forecast at the end of May 2021. (U of A System Division of Agriculture photo by Kevn Lawson)

“Progress started back on Thursday (May 13) and ran hard all the way into Sunday night, with a few still working ahead of rains this morning,” he said. “Tremendous progress was made on rice in some areas given this opportunity.”

“A lot of headway had been made in a short amount of time before today's rain,” he said Monday. “NASS says we slammed 26 percent of the cotton crop in the ground since the last report. That was mainly done from Friday to Sunday with some long hours reported.

The National Weather Service at Little Rock had at least a 40 percent chance of rain in the forecast for its warning area through Thursday night. Rain that fell Sunday and Monday brought flooding to parts of Perry, Faulkner and Saline counties.

The Fourche La Fave River in Perry County was up, thanks to rains over the last few weeks.

The river was expected to crest at 25.3 feet on Tuesday, “meaning more agricultural ground will go under. This river backs up due to the Arkansas River swelling which causes backflow onto these producers’ crop land,” said Zach Gardner, Perry County extension staff chair for the Division of Agriculture.

“About half of my rice has been planted and this rain is going to further delay rice planting, more than likely resulting in water seeded rice and late bean plantings like the past couple years,” he said. “My row crop producers are working as much ground between the rain showers. The bad thing that hit us was the river flood claiming about 400 acres of soybeans.”

Kevin Lawson, Faulkner County extension staff chair, said the forecast had his phone lighting up with questions from farmers.

“Friday, Saturday, and Sunday I received several calls from producers asking recommendations on herbicides for grain sorghum that was just planted, seeding rates for broadcasting rice, herbicides for broadcast rice, pre-emerge herbicides on corn, and corn fertility,” he said Monday. “I could tell they were really working hard this weekend to get as much planted as possible.”

“When Cadron Creek flooded, it backed up into these rice fields, so the producer held the water and flew in the seed,” Lawson said. “It was a good thing he did because with this current rain it would have never gotten dry enough to dry seed.”

“I had a few producers that were thinking about planting soybeans but decide to hold off until after the rain,” he said. “We still have some acres of silage corn to be planted but this will probably do it for corn that is planted for grain.”

Andy Vangilder, extension agriculture and natural resources educator for the Division of Agriculture, said “we had some peanuts planted early but a lot of peanuts went in the ground this past week under some better conditions.

“We still have a few acres to plant depending on where you are and how much rain you got but we definitely got a good amount of acres planted during that good weather period,” he said.

Hardke said “with things tapering off through Wednesday, it looks as though we’ll get another run into the weekend and the early part of next week.

“Believe it or not, things were drying out so much over the weekend that some rice actually needed a rain, and other ground that was worked was dried out to the point to need a rain before planting,” he said. “Low lying fields and areas still may not get in soon or at all, but jumps were made in places that had little progress to date. And still others are now making major crop plan changes with their remaining acres to get as much planted as possible at the next opportunity, with whatever commodity they may have a chance to roll with.”

“This planting season has been a series of hurry-and-wait events,” said Jeremy Ross, extension soybean agronomist for the Division of Agriculture. “The times when we have had good field conditions, our producers have worked day and night to get things done. I think the forecast for the remainder of this week is much better than what the meteorologists were predicting during the weekend.”

Soybean growers are beginning to see the end of their planting window and risk yield reductions the later the seed hits the ground.

“Every day we delay planting, we are losing soybean yield,” Ross said. “For soybean planted on May 15, we have lost 6 percent of the maximum yield in southern Arkansas and 1 percent in northern Arkansas.”

“If we can get some favorable weather in the next two weeks, we can still have very good yield potential,” Ross said.

Jason Kelley, extension wheat and feed grains agronomist for the Division of Agriculture, said corn was moving in the same directions as the other commodities.

“It’s hurry up while it is dry enough to plant before the next rain comes,” he said “We are 95 percent planted and finally caught up with the five-year average pace.

“Planting is likely finished as most corn acres that did not get planted will likely switch over to soybeans at this point,” he said. “Overall, we are looking good, and most were wanting a little rain on corn this week to activate fertilizer and herbicide that had been applied ahead of the forecasted rain.”