Arkansas’ livestock producers are moving cattle to higher ground as an unsettled weather pattern threatens to bring up to six inches of rain to parts of western Arkansas.

MALVERN, Ark. — Arkansas’ livestock producers are moving cattle to higher ground as an unsettled weather pattern threatens to bring up to six inches of rain to parts of western Arkansas.

Between 2-4 inches of rain had fallen Monday in sections west and south of Little Rock, with the heaviest rainfall falling in parts of Saline, Perry and Garland counties, according to the National Weather Service at Little Rock.

Rachel Bearden, Hot Spring County extension staff chair for the University of Arkansas System Division of Agriculture, said on Monday ranchers in her county had spent the previous days preparing for the heavy rain. 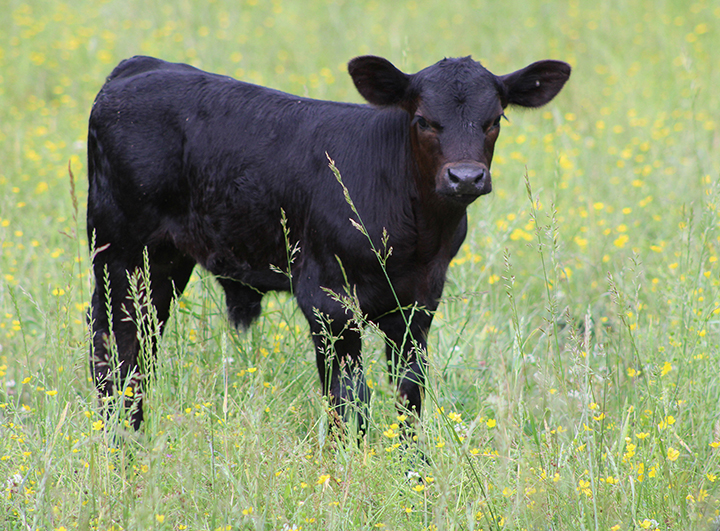 CALF — With a high probability for flash flooding, ranchers in western and SW Arkansas have to be vigilant that calves don't get lost. Taken May 17, 2021. (U of A System Division of Agriculture photo by Rachel Bearden)

“On farms in Hot Spring County along the Ouachita River, many producers have been moving cattle to higher ground, so they aren't in the flood plain,” she said. “When the forecast calls for several days in a row, the threat of high water is always a concern.

“For spring calving herds, this could mean being extra careful that all younger calves are accounted for, and not hid out somewhere, where water could rise and cut them off from the herd,” she said.

Shane Gadberry, professor-ruminant nutrition for the Division of Agriculture, said among cattle, “mineral consumption often picks up this time of year and it's important to not let that mineral feeder run empty.

“Foot rot can be wet condition problem and trace minerals are important for both immunity and hoof health,” he said.

The wet weather will have multiple effects on pastures and especially forage that’s due for haymaking.

“I've been seeing a lot of producers getting their hay equipment ready,” Gadberry said. “We see a lot of fescue and ryegrass being harvested in May. Both forages are headed right now and any delay in harvest will result in a drop in quality.

“For areas that get really soaked, there may be an extra delay just waiting for the ground to dry out to get harvest equipment over the fields without rutting up the fields,” he said.

Zach Gardner, Perry County extension staff chair for the Division of Agriculture, said growers in his county confirmed what Gadberry was describing.

“I have talked around a little and so far, the one thing that kind of sticks out is the problem with harvesting cool season forage such as ryegrass and fescue,” he said. “The weather is inhibiting harvest longer than should be, resulting in lesser quality winter forage being harvested for hay.”

With a delay in haymaking and slow emergence of bermudagrass, “hay is still being fed on some farms to help alleviate this early season grazing pressure,” Gardner said.

Gadberry said winter grass weeds like cheat and little barley helped fill the transition from hay to pasture in April, “but those weeds are starting to go to seed. Cows generally quit eating those grass weeds once they get mature.”

There is one upside to the rain.

“Now is also a good time to be thinking about internal and external parasite control,” Gadberry said. “We're seeing those pesky horn flies on the backs of cattle.

“Use a rainy day to put together a herd health product list and get supplies ordered so they'll be in the cabinet when you're ready for them in the coming months,” he said.