Win some, lose some, but active Arkansas gins see net gain of one, NASS says
skip to main content
News - 2021

Win some, lose some, but active Arkansas gins see net gain of one, NASS says

JONESBORO, Ark. — Arkansas gained one more cotton gin, raising the number of active gins to 30 in 2020, compared to 29 in 2019, according to numbers from the National Agricultural Statistics Service.

The increase coincided with a year that saw Arkansas’ second-highest yield, at 1,179 pounds of lint per acre. 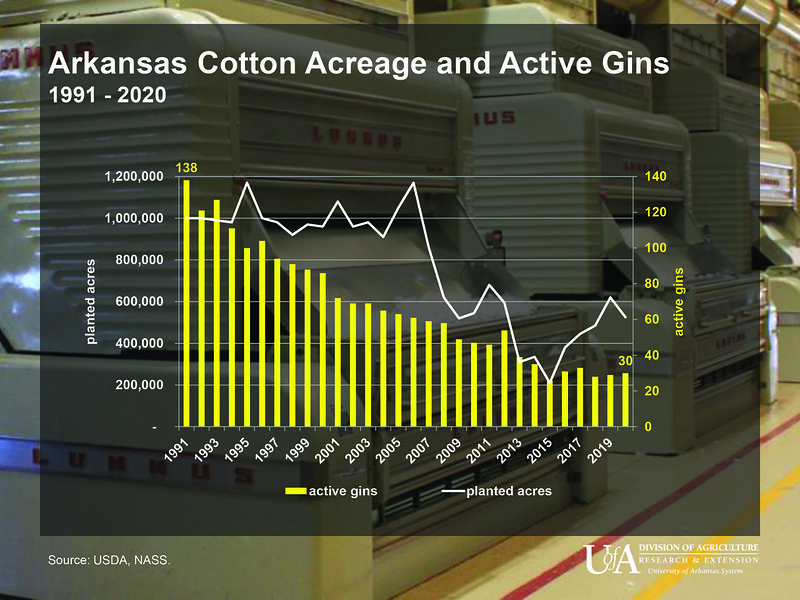 COTTON ACRES AND GINS — Graph showing relationship between number of active gins and cotton acreage in Arkansas. Numbers from National Agricultural Statistics Service. (U of A System Division of Agriculture image by Scott Stiles)

“The NASS numbers confirmed the new construction projects we had been following over the past year in Desha and White counties,” said Scott Stiles, extension economist with the University of Arkansas System Division of Agriculture. “In one sense it's great to see optimism toward cotton. On the other hand, this year and next could be very challenging for gins.”

Of the gins operating last year, Stiles said that almost half are processing 40,000 bales or more annually and 70 percent of the gins had an annual volume of at least 20,000 bales, “a reflection of the long-term trend of fewer and larger gins.”

Mississippi County had the highest number of active gins in the NASS count, with six. Craighead was next with five.

Challenges ahead
Cotton growers will have their share of challenges in 2021, Stiles said.

“Grain prices have returned to historic highs. Grain and cotton price relationships currently look very much like they did when cotton acreage dipped to record lows in the state,” he said. “Grains will compete heavily with cotton this year and likely next year as well.”

Stiles said a look Wednesday at the U.S. Department of Agriculture’s “first balance sheets for the 2021 crop indicate very little increase in soybean and corn ending stocks. That will keep prices for the two crops elevated into 2022.”

The abundance of rain this spring has posed challenges to planting in cotton and other crops.

In the May 10 release of the NASS “Crop Progress” report, Arkansas’ cotton crop was estimated to be 19 percent planted, compared with the five-year average of 35 percent.

“When all is considered, we may be closer to 25 percent and perhaps higher,” Stiles said. “The March ‘Prospective Plantings’ indicated we'd be down 7 percent from last year, or about 35,000 acres. With the weather issues thrown in with the continued grain price increases, we may be looking at a 20-25 percent reduction in cotton acres from last year.”

Déjà vu all over again

With the advent of a few sunny days, people are starting back in the field, said Bill Robertson, extension cotton agronomist for the Division of Agriculture.

“We have farmers in southeast Arkansas that are already planted, or have a good bit of their cotton planted,” he said. “Moving north in Arkansas, our widow of opportunity is much less.

“In the central part of the state, for some, there have only been two and a half days in the field,” Robertson said. “I’ve talked to a farmer around Jonesboro, and he’s only had a half a day in the field.

“We’ve ranged from farmers being barely started to some being finished,” he said. “And it’s not just Arkansas. It’s Tennessee and some in Missouri too. It’s not pretty.”

Robertson said that “for every day we plant after May 20, we lose 2 percent yield potential. That’s an old rule of thumb, but not wrong.”

May 20 is also the crop insurance final planting date for counties north of I-40, Stiles said. “You can plant after that date, but your insurance coverage starts declining 1 percent each day after the 20th.”

Robertson said a slow start isn’t insurmountable. Last year at this time, only half of the cotton was in the ground, and growers had their second-best yield ever.

However, “this year, we’re only a quarter planted, and at this time last year, we didn’t have $14 beans,” he said. “People are going to be looking hard and seriously about what acres are going to go to cotton or switch to beans.”

Some of that switch may be limited by the equipment these farmers have, but “I can’t help but think our cotton acres are going down,” Robertson said.

Stiles added that “cotton prices haven't necessarily been left behind in the crop price run-up. 2021 cotton futures are trading in the mid-80 cent area.”

Aside from planting delays, “growers are also taking a close look at very profitable prices in corn and soybeans,” he said. “Soybeans have basically half the input cost as cotton and a much wider planting window. Corn's an excellent rotation with cotton. Growers that have been needing to work in an alternative chemistry to manage weeds on cotton ground can do that profitably this year with corn.”