LITTLE ROCK — The 2021 edition of the Rural Profile of Arkansas, a biennial publication from the University of Arkansas System Division of Agriculture, brings with it a powerful online tool to help users visualize the facts and figures that describe differences in life between rural and urban areas of the state. 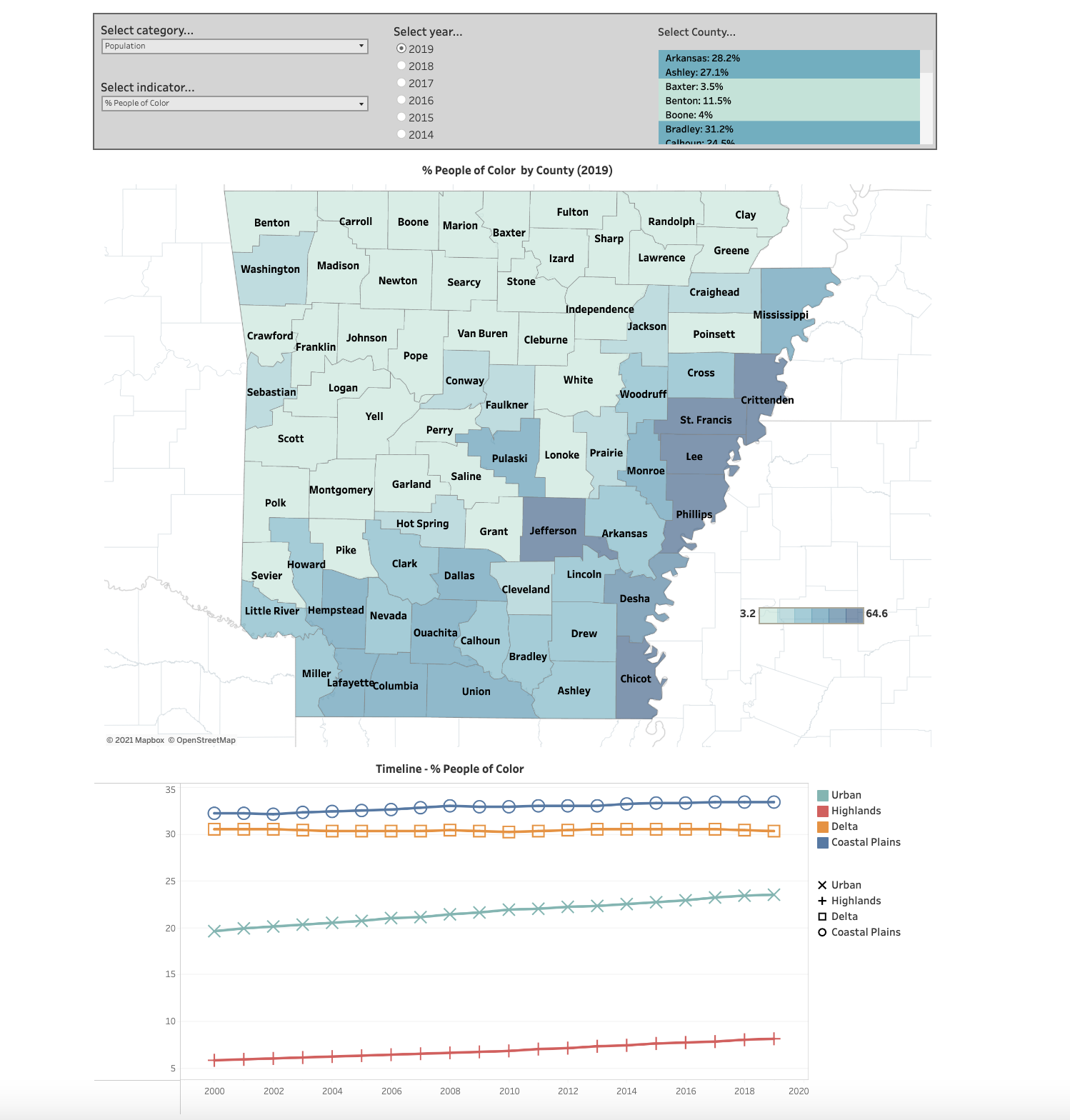 A NUMBERS STORY — The Rural Profile Dashboard, available at uaex.uada.edu/rural-profile-dashboard, uses data from 2007-2020. County-level data for categories including economy, education, health, infrastructure, government, population and social-economic stress can be viewed in tables, maps and charts. (Division of Agriculture image.)

The Rural Profile Dashboard, available at uaex.uada.edu/rural-profile-dashboard, uses data from 2007-2020. County-level data for categories including economy, education, health, infrastructure, government, population and social-economic stress can be viewed in tables, maps and charts. All other indicators used in the 2021 profile can be examined through the online dashboard as well.

The full Arkansas Rural Profile is designed in part to support policy and planning for leaders at all levels of state and local government, according to Bob Scott, director of the Division of Agriculture’s Cooperative Extension Service.

Wayne Miller, professor of Community, Professional and Economic Development for the Division of Agriculture, and co-author of the 2021 profile, said the publication highlights both the challenges and successes of rural communities in the state.

“While rural Arkansas is diverse, many rural areas are struggling to provide the infrastructure, skilled workforce, quality of life and good-paying jobs needed to maintain and grow their local economies and provide households with enough income to support their families,” Miller said. “However, there are some rural counties that are doing well, and hopefully we can all learn from their activities.”

Rural populations across the country have declined for more than a century. According to the United States Census Bureau, more than 90 percent of Arkansans lived in rural areas in 1900, compared to about 60 percent of the overall U.S. population. Over the next 110 years, those populations decreased steadily across the nation, as a greater percentage of U.S. residents gravitated toward urban centers. By 2010, only about 45 percent of the state’s residents lived in rural areas.

The trend has continued in Arkansas and elsewhere. According to the 2021 Rural Profile, the state’s rural population decreased about 3.3 percent between 2010 and 2019, while the overall population of Arkansas grew by more than 3 percent during that same period. However, about 41 percent of the state’s population still resided in rural counties in 2019, which was higher than the national average.

While communities across the country have felt the economic impact of the COVID-19 pandemic, the effects were compounded in rural Arkansas communities, many of which were still struggling to recover from the Great Recession of 2008. From 2010 to 2018, overall employment in Arkansas grew at about 9 percent — half the national rate of 18 percent. Broken down by rural and urban counties, however, employment grew in urban counties at about 13 percent, while employment in rural counties remained stagnant during the same period.

The Rural Profile also examines topics including infrastructure, social and economic stress, health, education and more. The profile is available to view and download at no cost at https://www.uaex.uada.edu/publications/pdf/MP564.pdf.