Making the most of manure in pastures

FAYETTEVILLE, Ark. — “When life gives you lemons, make lemonade,” or so the saying goes. Dirk Philipp, associate professor of animal science for the University of Arkansas System Division of Agriculture, has some advice for cattle producers and pasture managers who are often blessed with other materials with which to work. 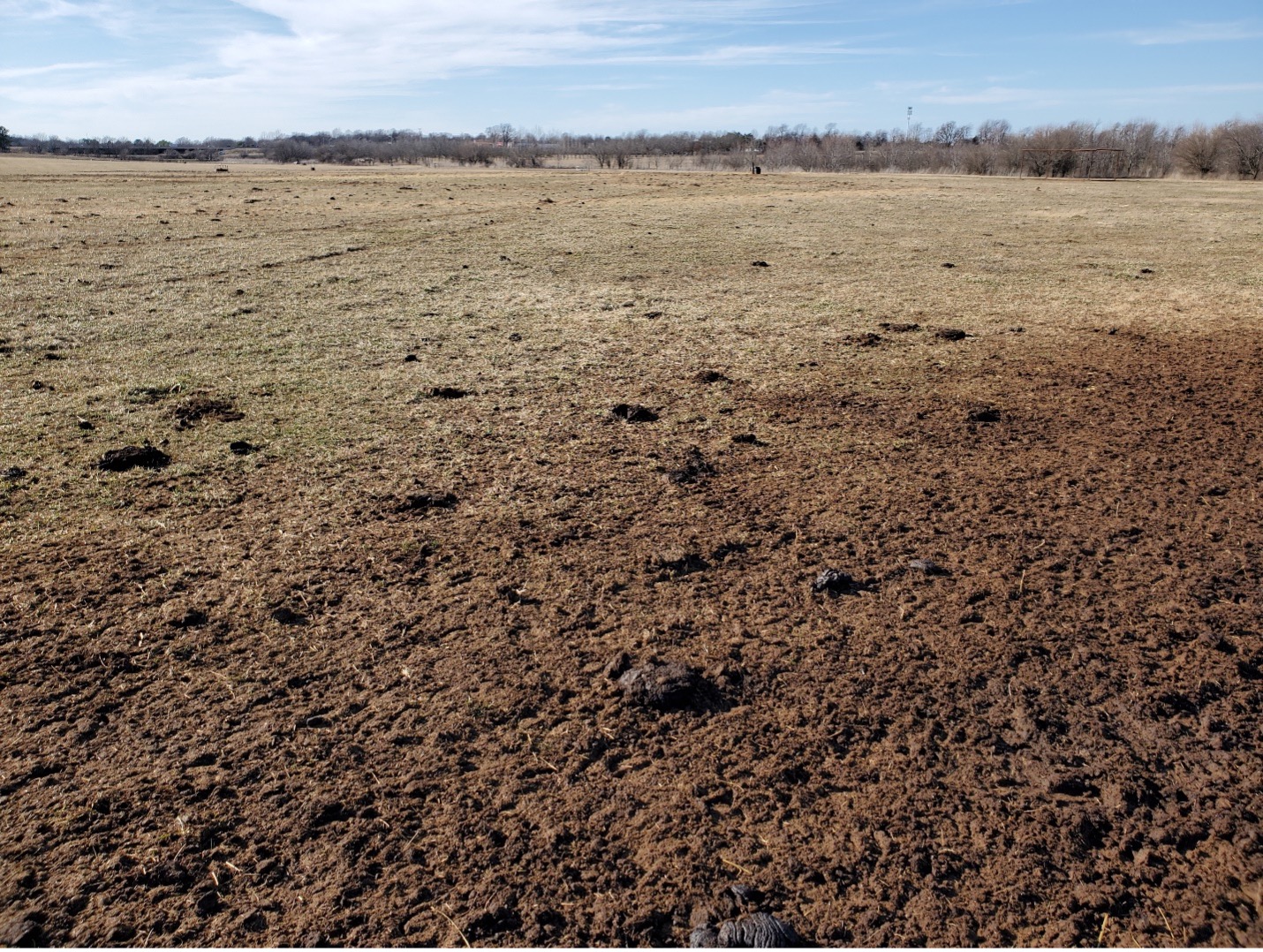 KNEE DEEP — Sacrifice pastures can be full with manure piles in spring. Use a drag or other device to spread them out to make use of the nutrients contained in the manure and to cycle them back into the soil. (Division of Agriculture photo.)

The use of “sacrifice pastures” — pastures where cattle can consume hay without damaging other, more lush pastures in the process — is a common practice for cow/calf operations during the colder parts of the year. But during the winter, when some forage species are entirely dormant, damage can still be done to the swards if cattle feeding isn’t properly managed. (A sward is an expanse of grassland.)

When selecting a location for a sacrifice pasture, Philipp said producers should consider several factors — especially the high nutrient output across a relatively small area that cattle tend to produce when feeding in this sort of situation. The nutrients include nitrogen, phosphorus and potassium, or N, P and K.

“Since cattle will very likely be fed with purchased feed, the external nutrient input can be enormous,” he said. “The location should be selected so that the environmental impacts and damage to the grass sward can be minimized, while the potential for recovery during the next growing season will be maximized.”

Philipp said pasture managers should distribute the manure evenly across the field, and tend to it regularly.

“Move hay rings and feeders regularly,” he said. “Don’t just place the hay and feed troughs near the gates — this is where your nutrient levels are high to begin with. Go the extra mile and select feeding areas far away from the gates.”

Because hay and protein supplement feeds typically contain a considerable amount of nutrients, most of which will be excreted when consumed by cattle, producers should be careful not to “burn out” pastures with additional fertilization.

“Make a rough calculation of how much nitrogen and phosphorous you might add to nutrient-poor areas of your farm,” he said, and consider how much of that need will be met by the manure.

Managing the feeding areas can be a bit burdensome, Philipp said, so producers should plan accordingly.

“Things will obviously get a bit messy and muddy when it rains,” he said. “Place hay rings on higher ground with good drainage to minimize the likelihood of muddy conditions, and use the rings consistently. If you place the bales on the ground, cattle will spoil it.”

Moving the hay rings consistently will help better distribute the nutrients as well, he said.

Once spring arrives, and normal grazing replaces hay feeding, producers should use some form of dragging mechanism to spread out the manure piles. This will help distribute nutrients even further, and allow producers the opportunity to make a clear assessment of the field’s canopy.

“I suggest letting the sacrifice pasture rest for a few weeks to monitor weed intrusion and any change you see in forage vegetation compared to the previous year,” Philipp said.

At that point, growers may consider applying herbicides if needed, and make plans for overseeding the pasture to close any major forage gaps.