KEISER, Ark. — When Fred Bourland left the family cotton farm in Mississippi County for the University of Arkansas, clear across the state in Fayetteville, he had anything but farming on his mind. 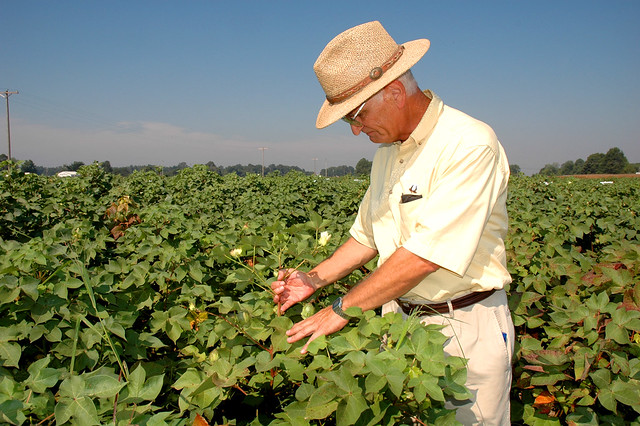 TALL COTTON — Fred Bourland, cotton breeder and researcher at the Northeast Research and Extension Center at Keiser, examines cotton varieties being tested in research plots at the Lon Mann Cotton Research Station at Marianna. (U of A System Division of Agriculture photo by Fred Miller)

“I grew up around cotton,” Bourland said. “When I went to college, I was planning to get as far away from cotton as I could.”

But sometimes you just can’t run away from your calling.

Bourland received the A.L. Vandergriff Cotton Pioneer Award in February from the Southern Cotton Ginners Association. He is a professor of cotton breeding and genetics for the Arkansas Agricultural Experiment Station, the research arm of the University of Arkansas System Division of Agriculture.

The award recognizes a career of innovative cotton research accomplishments.

“The Agricultural Experiment Station is proud of Dr. Bourland’s many accomplishments and distinguished career in cotton breeding,” said Jean-François Meullenet, senior associate vice president for agriculture-research and director of the experiment station. “We congratulate him on receiving this prestigious award.”

The Bourland family farm was in Mississippi County near the community of Lost Cane. “We were actually between Lost Cane and Whistleville,” he said. Which is to say, not really near any town. He and his brothers liked to hunt at nearby Big Lake.

“When we went hunting, we actually went toward town,” Bourland said. That town was Manila, where he went to high school.

Bourland’s road back to the cotton fields began in his senior year at what is now the Dale Bumpers College of Agricultural, Food and Life Sciences at the University of Arkansas. He took a class in plant breeding taught by experiment station soybean breeder Chuck Caviness, who developed some of the earliest Arkansas-adapted soybean varieties. Bourland said he began reading everything he could about crop breeding, even beyond what was required for the course.

By 1970, when he began his master’s degree program at the U of A, he was back in tall cotton. After earning his Master of Science in plant breeding, Bourland went to Texas A&M University, where he earned a doctorate in genetics.

With a Ph.D. in hand, Bourland went to work as an assistant professor and cotton breeder at Mississippi State University. Ten years later, in 1988, he came back to Arkansas as a full professor to breed cotton for the Agricultural Experiment Station and to teach for Bumpers College.

In 1997, Bourland moved to Keiser Arkansas — roughly 10 miles south of his family’s Mississippi County farm — to continue his cotton breeding and research program while serving as director of the Division of Agriculture’s Northeast Research and Extension Center. In 2016, he stepped down as director and now focuses all his energy on cotton.

Including graduate school, Bourland has spent more than 50 years working in the field he thought he was walking away from when he left for college. And he wouldn’t have it any other way.

In that time, he has released more than 100 improved cotton varieties and germplasm lines adapted to Arkansas. Other public and commercial cotton breeders use those germplasm lines in their own breeding programs.

But what Bourland is most proud of is a host of new breeding tools and methods that he has developed. “Those tools and techniques will still be used long after my germplasm is gone,” he said.

In breeding and developing new breeding technology, Bourland’s aim is the same — improving yields and fiber quality of cotton.

One of his current projects focuses on developing smoother bracts — the leaflike structures at the base of the cotton bolls. They are covered with fine, hairlike structures that tend to make the bracts adhere to the cotton fibers during picking. They are hard to remove during ginning and cleaning and are considered trash when the cotton is graded. That can cost cotton growers discounts in the prices they receive for their crops.

“Leaves fall off on the ground when cotton fields are defoliated before picking,” Bourland said. “But the bracts remain attached to the bolls, and they tend to stick to the fibers.”

A smoother bract with fewer hairs, or no hairs, could go a long way toward reducing the trash in cotton bales and improving farmers’ income.

But Bourland said he was not expecting to receive the A.L. Vandergriff Cotton Pioneer Award from the Southern Cotton Ginners Association. “It was a total surprise to me,” Bourland said.

For many accolades, an individual is nominated or submits an application. But Bourland had no idea he was in the running for this one. While he often works closely with county Extension agents, crop consultants and other cotton researchers, Bourland said he hasn’t worked as closely with ginners, though he has a great deal of respect for them and the investments they make that often make them the core of a community.

“For ginners to recognize my work like this is very special,” he said.

It’s about the people

Bourland’s best memories of his long career revolve around people.

“You know, the people I work with, faculty and staff in both the experiment station and extension, have become like a second family to me,” Bourland said. “And especially the staff who work with me every day. Even during this coronavirus pandemic, they have found creative ways to get the job done. I couldn’t have done it without them, and I owe those folks a lot.

“I got to work with an interesting plant and with interesting people,” he said. “You just can’t do any better than that.”