(1,468 words)
(Download this story in MS Word format here.)
(Newsrooms: With additional art at https://flic.kr/s/aHsmW8ys1j, and video at https://youtu.be/5FthHyUTjK4)

DUMAS, Ark. — Farmers in five counties in southeastern Arkansas suffered more than $200 million in direct losses to major crops after the major flooding and storm event in early June, according to a preliminary estimate by experts with the University of Arkansas System Division of Agriculture said Monday. 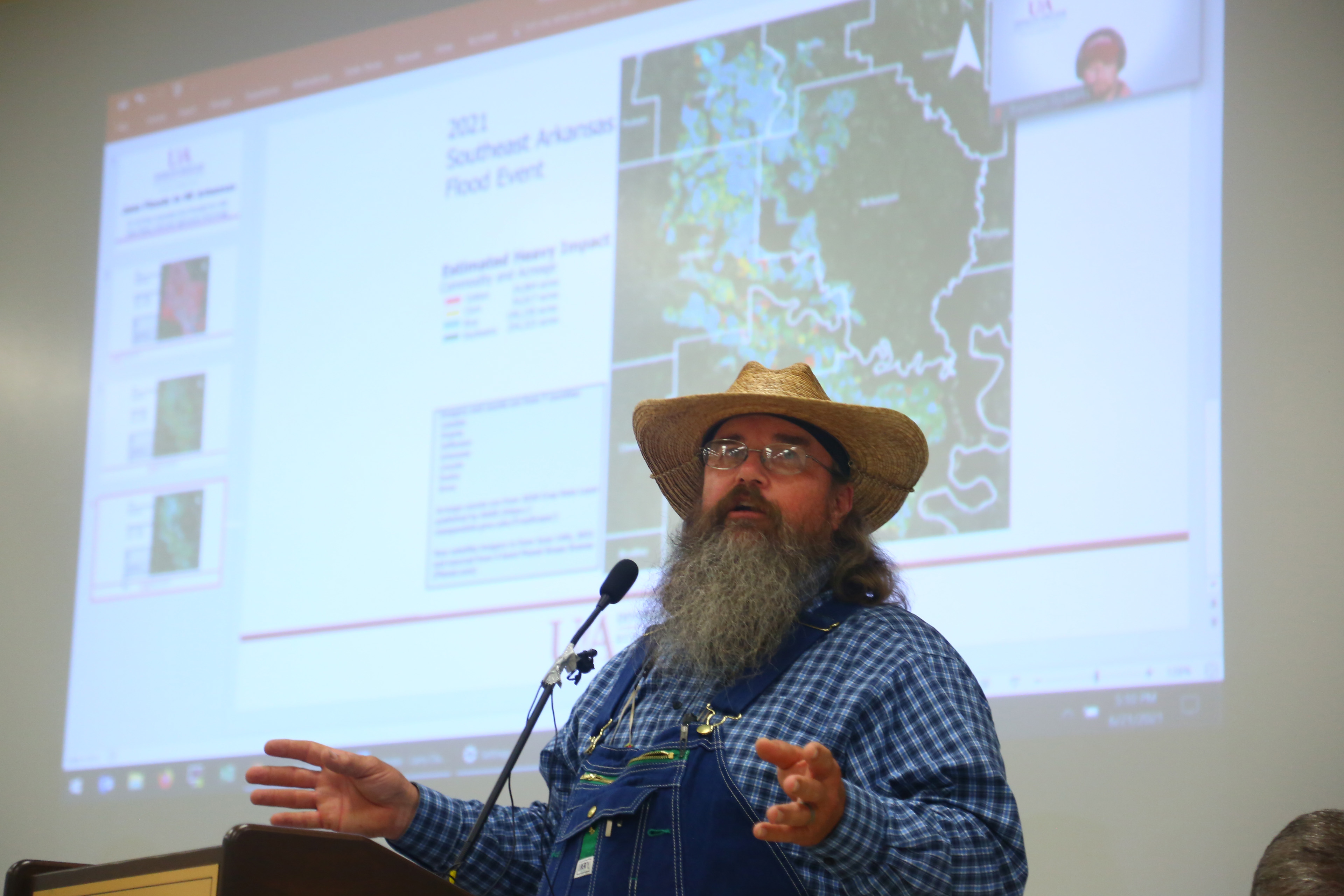 John Anderson, economist with the Division of Agriculture and the Dale Bumpers College of Agricultural, Food and Life Sciences, delivered the initial estimate during a flood recovery meeting held Monday evening at the Dumas Community Center.

Anderson was one of about a dozen experts with the Division of Agriculture presenting crop-specific information and answering questions from the approximately 175 in-person and virtual attendees.

The town of Dumas, and the nearby Division of Agriculture research station at Rohwer, are at the emotional — if not quite geographical — center of the flooding event, during which more than 19 inches of rainfall was recorded in a 48-hour period. The five counties included in the damage estimate include Desha, home to both Dumas and Rohwer, Lonoke, Prairie, Jefferson and Drew counties. The estimate did not include Chicot County, the southeasternmost county in the state, although it will likely be impacted as floodwaters continue to drain southward from Desha County on their way to the Mississippi River.

Anderson said the estimates concerned five major crops: soybeans, rice, corn, cotton and wheat. The associated loss estimates amounted to $70 million each in soybeans and rice, $60 million in corn, $6 million in cotton and approximately $1 million in wheat and grain sorghum.

“That’s where we stand today,” Anderson said, noting that as counties begin to revise their estimates, those numbers will likely change. He said the estimates did not include specialty crops.

Vic Ford, associate vice president for agriculture and natural resources for the Division of Agriculture, said that about 600,000 acres of cropland in southeastern Arkansas were affected by the flooding event, with about half that submerged in several feet of water for an extended period, Ford said.

He said growers farming crops within the 300,000 heavily affected acre area were likely facing total crop loss for the season.

Cotton
Bill Robertson, extension cotton agronomist for the Division of Agriculture, said about 4.5 to 5 percent of the cotton crop in southeastern Arkansas had been lost to flood damage in June.

Robertson said that in the wake of the flood, many cotton growers will need to plow the soil to break the surface crust so that the soil can breathe.

“But when we do that, we have to be very careful not to destroy the roots that are there, because cotton tends to be shallow-rooted in these conditions,” Robertson said.

Robertson warned against over-irrigating and over-fertilizing once the floodwaters drain off and the full heat of summer is upon the land.

“We’ve got a lot of potential ways to shoot ourselves in the foot,” he said.

He said growers may be tempted to overcompensate for perceived losses in nitrogen by applying additional fertilizer on fields that had already been appropriately fertilized in the spring.

“After a short while, the oxygen will get deeper into the soil, and we’ll get a good deep root system on the cotton plants again,” Robertson said. “But when the plant picks up all that nitrogen we’re putting out, then you’ve got a plant that’s in high gear, going as fast as it can go at a point in the season when we’re wanting it to slow down for harvest.”

Soybeans
Jeremy Ross, extension soybean agronomist for the Division of Agriculture, said growers should act quickly to assess how much of their soybean crop is salvageable, and how many acres they want to try to replant.

“Right now, on soybeans, the main thing is evaluating what we’ve got,” Ross said. “If you’re looking at replanting, increase your seeding rate 10-15 percent over what you’ve been doing under normal production practices.”

Ross cautioned, however, that maximum yield is essentially out of reach for soybeans planted this late in the season.

“Every day we delay getting beans into the ground, we’re losing yield,” he said. “By June 15, we’ve already lost 22 percent of maximum yield. So as of today, we’re looking at maybe 30 percent yield loss.”

Ross urged growers to use inoculants, which help to stimulate nitrogen-rich nodules on root systems, during replanting to maximize the available yield.

Corn
While estimates of economic damages in Arkansas corn were nearly as high as those of soybean and rice, Jason Kelley, extension wheat and feed grains agronomist for the Division of Agriculture, said that acreage losses in corn were relatively limited in the southeastern zone.

“Nearly everything in the area has been affected to some degree from flooding or wind damage that blew corn down, but we lost probably no more than 30,000 acres of corn,” Kelley said. According to a March 31 report from the U.S. Department of Agriculture, Arkansas growers planted approximately 700,000 acres of corn this year.

He said that replanting corn at this point in the season was likely economically unfeasible for most growers.

“This late in the game, replanting might get you half of what you’d get in an optimum yield,” Kelley said. “Economically, we’re beyond the window for replanting corn or grain sorghum.”

Rice
Jarrod Hardke, extension rice agronomist for the Division of Agriculture, said that while hundreds of thousands of rice acres in the southeastern zone were impacted to some degree, the actual crop loss will be much smaller.

“Some growers lost partial fields, some entire fields were lost. It’s all over the place,” Hardke said. “Rice tolerates a flood very well — but because of this situation, where the crop gets submerged, one field to the next, you’re going to see a massive difference in survivability.”

Attendees at Monday’s meeting also heard from experts in the fields of soil health, irrigation and pest management.

Pump management
Christopher Henry, associate professor for the Division of Agriculture, urged growers to inspect and flush their pumps, which will likely harbor bacteria if they were submerged during the flood.

“You will have to irrigate this year, I’m pretty sure,” Henry said. “Any pumps that have been flooded and have been underwater, there’s a really good chance you have mud in them. You’re going to need to flush those out as soon as you can.

“There’s a good chance there are bacteria in that well, so I’d talk to my well driller about chlorinating that well,” he said. “If there’s anything in that screen, this will clean it out, and if you’ve got iron-producing bacteria this will clean them out, too, so your well will be productive when you really need it most, over the next 30 days or so.”

Tommy Butts, extension weed scientist for the Division of Agriculture, said growers should keep three key things in mind when managing weeds in the aftermath of the flood.

Managing weeds
“Weed management isn’t going to get any easier after the flood,” Butts said. “It’s going to be on a very field-specific, case-by-case basis.

“It’s going to be challenging,” he said. “You’re going to have a different situation in every field. It’s going to take careful scouting and precise management.”

Butts reminded growers that, although any residual herbicides growers applied before the flood might be washed away, they still count toward their total seasonal use of herbicides.

Finally, Butts said that with the June 30 cutoff date for dicamba herbicide application looming, growers should give careful thought as to what soybean varieties they will replant, if necessary.

“Even if your crop survives the flood, coming up against this cutoff date, you want to think about your next options for controlling pigweed,” he said.

Insect management
Gus Lorenz, extension entomologist for the Division of Agriculture, warned that while insect pressure will likely be intense going forward, growers should still pay attention to the threshold recommendations for applying insecticides, rather than making unnecessary applications.

“We’re in a bind, and the tendency is to overcompensate for that,” Lorenz said. “Those thresholds are there to tell you when you need to make applications. Every day we don’t have to spray is a good day. We don’t want to spend money on crops we don’t need to spray with insecticide.”

Several growers in attendance said the recent flooding was one of the worst weather events they could recall. Jerry McMahan, who farms cotton and other crops near the Division of Agriculture research station at Rohwer, said it was the worst weather he’d seen in 50 years of farming.

“I’ve never seen anything like it,” McMahan said. “The worst I’ve ever seen. But we can’t give up. We’ve got to try to do something.”