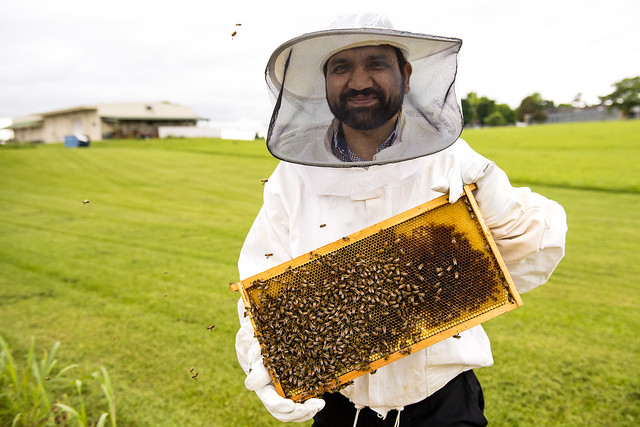 So, when honeybees built a new colony in a large retail parking lot in Fayetteville, they were lucky that Neel Joshi happened by on his way to the grocery.

Joshi is an associate professor of entomology for the Arkansas Agricultural Experiment Station, the research arm of the University of Arkansas System Division of Agriculture. He specializes in research on pollinator health, fruit entomology, integrated pest management and pesticide toxicology.

When Joshi arrived at the store for his weekly grocery run, he noticed an area around a tree in the parking lot that was roped off to keep people away. So naturally, curious people were over there to see what was up and Joshi joined them.

The bees had constructed their hive on one of the branches. The limb was not very large and was cracked.

Around 20,000 species of bees are documented worldwide, and 4,000 species are native to the U.S. In Arkansas, which has a lot of natural or minimally disturbed habitat, the number of native bees could be 250 to 300, Joshi said. About 70 percent of those are ground-nesting. Their nests are often easy to spot, appearing as circular holes in open patches of ground. The holes vary in size depending on the size of the species.

Honeybees and some others prefer above-ground nesting sites, in existing cavities if available. They will move into hollow trees, openings in rocks and even your attic if you’re not careful to keep it sealed.

A healthy honeybee colony can support up to 50,000 individuals or more if food resources are adequate. A hive’s health also depends on the absence of stressors like toxic pesticide exposure, diseases, parasites or unusually harsh weather patterns.

Joshi said a bee colony is composed of one queen, thousands of worker bees and hundreds of drones. The queen lives in relative luxury, even eating special food, called royal jelly, that is richer than the common honey eaten by the other bees. The queen mates with the drones during a mating swarm that commonly occurs in the spring. She is then able to lay 1,000 to 3,000 eggs every day for the rest of her life, usually around two years or more, depending on her overall health, Joshi said. After she dies, a new queen is prepared and mates during the swarm.

The workers are all female and are aptly named. They do all the work of building and maintaining the hive, caring for the young, gathering pollen and nectar from flowers and making honey. They have a shorter lifespan in summer than in winter, depending on their age and changes in their tasks.

The drones have one job — mate with the unfertilized queen. Once that’s done, they simply live off the colony for the rest of their lives, unless a new queen rises before they die. “They’re kind of free-riders,” Joshi said.

A parking lot, with cars, shopping carts and pedestrians moving about, is not a good place for bees. “If disturbed, the honeybees can become aggressive toward shoppers,” Joshi said. “It’s important to relocate colonies that are located in such public places. Bees naturally prefer to use existing cavities when available, so a hive box is an ideal choice.”

Fortunately, on that late May afternoon, the honeybees were swarming for mating, Joshi said. “Their activity was focused more on the colony, so they were less aggressive toward the people.”

Mating swarms are common in the spring, and it’s a critical time for the colony. “Moving them safely is important,” Joshi said.

Joshi, ever ready to spend time with bees, had a bee suit and other field gear in his car. He went inside and talked with the manager about removing the bees to a safer location. The manager said the store had called someone to remove the bees the day before, but that effort failed and likely resulted in cracking the tree branch. He asked Joshi to wait until the store closed and the parking lot cleared out but gave him the go-ahead to carry out the honeybee rescue.

The store closed within a half-hour or so, and Joshi went to work.

The key to successfully relocating a honeybee colony is to get the queen. Wherever the queen goes, the colony moves with her, Joshi said.

Decked out in protective gear, Joshi clipped the branch the honeybees had colonized. He placed the bees in a cardboard box and placed it in a reusable shopping bag.

He then drove them to the Milo J. Shult Agricultural Research and Extension and placed the bees in a hive box in the center’s entomology area. The whole operation took about an hour.

A couple weeks later, the former parking lot honeybees are happy in their new home. They are busy building combs, filling them with honey and even keeping new bee larvae safely sealed in wax nurseries called brood combs.

Life is good in the colony.

Joshi said anyone who finds a bee colony in their yard, house or other undesirable or dangerous place should have it moved rather than disturbing the hive or using insecticides to eradicate them.

“Honeybees and other beneficial species are in decline,” Joshi said. A loss of wild bee populations would wreak disaster on many pollinator-dependent fruit and vegetable crops and gardens. Joshi’s research includes understanding the impacts of pest control products on bees and other pollinators and finding safe alternatives to control crop pests without damaging the beneficials.

Anyone in need of moving a bee colony can contact the Division of Agriculture’s department of entomology and plant pathology at 479-575-2445. Joshi said the department has several researchers and extension specialists who can assist in safely moving wayward bee colonies.