KIBLER, Ark. — There’s no trophy, but an informal competition between two Arkansas agricultural research stations does come with a little bit of bragging rights for the biggest berry. 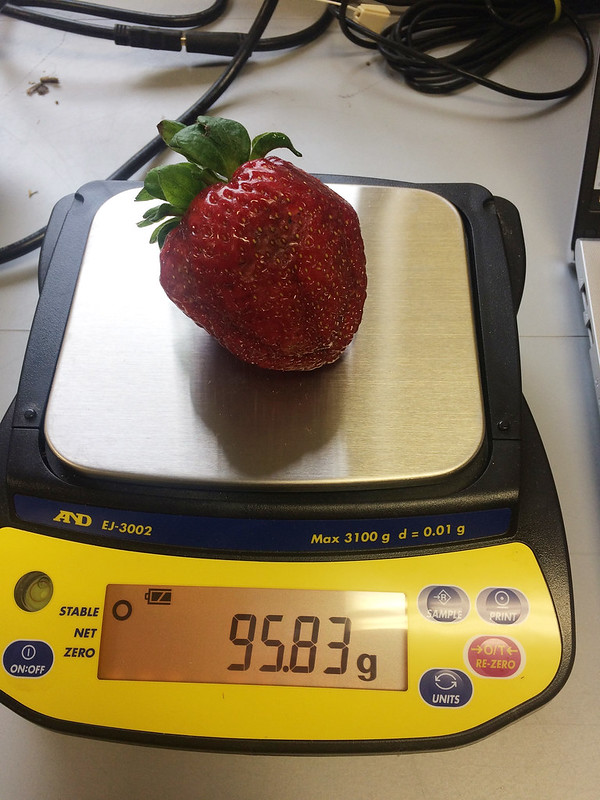 It pits the Vegetable Research Station at Kibler against the Fruit Research Station at Clarksville. The two stations host variety and production trials as part of their land grant mission within the Arkansas Agricultural Experiment Station, the research arm of the University of Arkansas System Division of Agriculture. Variety trials help researchers determine which fruits might perform best under different conditions for farmers in Arkansas.

While the work is serious, a little friendly competition never hurts.

“One of my program associates, Lesley Smith, worked at the fruit station several years ago. The fruit station program associate, Taunya Ernst, had a competition for who could pick the largest blackberry,” said Stephen Eaton, director of the Vegetable Research Station. “When we started to grow strawberries, Lesley and Taunya started a competition between the two stations on who had the biggest strawberry.

“The prize has been for bragging rights. However, if someone wants to come up with a traveling trophy, it might get serious,” Eaton said with a laugh.

“Even though we won last year’s competition, the Vegetable Station will concede the biggest berry this year to the Fruit Station,” Eaton said.

With strawberry harvest finishing up on May 27, Jackie Lee, director of the Fruit Research Station, said the biggest berry clocked in at 95.8 grams, or about 3.38 ounces.

By comparison, individual strawberry fruits usually weigh in the 17-to-25 gram-, or 0.6-to-0.88 ounce- range over the season, Lee said.

“We will continue the tradition,” Lee said.

At the heart of the competition is the research being done by the horticulture scientists to determine what berries can perform best under Arkansas’ growing conditions. Among the factors they take into account are resistance to disease, growth management and shipping quality, as well as consumer-friendly characteristics such as color, flavor and size.

Both of the biggest strawberries from each station were the Fronteras variety.

“Fronteras is new to Arkansas over the last few years,” said Amanda McWhirt, extension specialist-horticulture crops for the University of Arkansas System Division of Agriculture.

“It is known to have very large and uniform fruit and good flavor.”

McWhirt said that the researchers had 12 strawberry varieties planted at Kibler and six at Clarksville.

“It doesn't surprise me that Fronteras was the biggest at both stations! It makes some giant berries,” she said. “Not everyone grows it, but it is being tried by growers more and more.”